AdDuplex has released its latest Windows usage report, which now includes Windows 11. The data is based on data collected from about 5,000 apps that use AdDuplex SDK version 2 or higher, and it was collected on July 26. The company noted that there were a total of about 60,000 PCs surveyed.

The biggest news is that Windows 11 is being run by 0.9% of the PCs that were surveyed by AdDuplex. Indeed, when the last report was released, there were no Windows 11 previews just yet. There are still 0.2% of devices that are on an Insider version of Windows 10, presumably 21H2. That number is so small because 21H2 availability is actually very limited. You can’t even opt into it. You have to have been kicked off of the Beta channel for not meeting the system requirements for Windows 11. 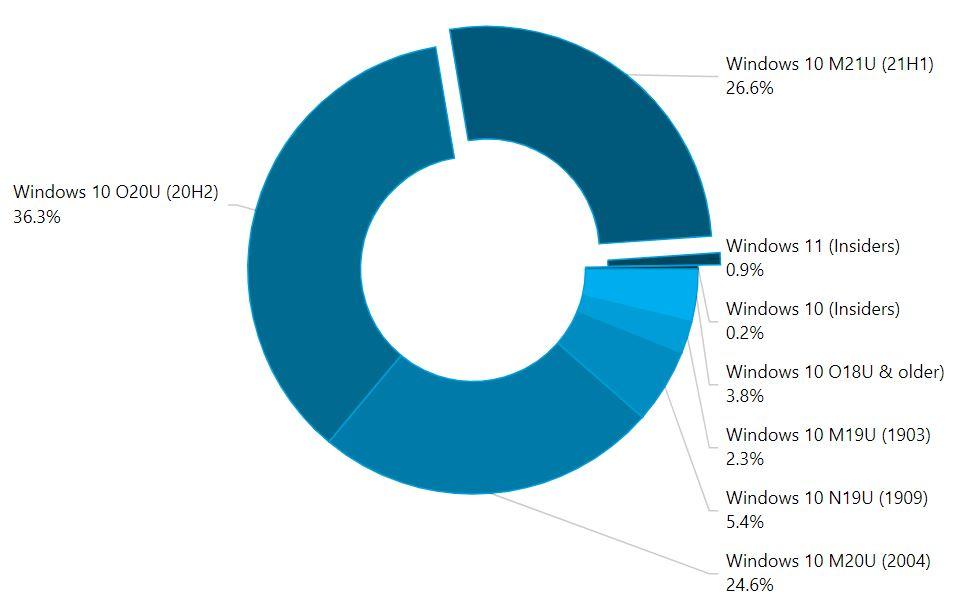 But speaking of system requirements, they have been raised significantly with Windows 11. Fewer PCs will be able to upgrade. Still, the Insider Preview isn’t in the Beta channel yet, so once it is, that number should get a boost.

The last AdDuplex report was actually in April, and at the time, things looked very different. Windows 10 version 2004 was still the most popular version of Windows, followed closely by the newer Windows 10 version 20H2. Obviously, there’s been another feature update since then, so Windows 10 version 21H1 hits the board with 26.6%, while 20H2 moves into the number one spot at 36.3% (actually down from 40.1%) of Windows PCs. Version 2004, the oldest supported version for consumers, slipped from 40.6% to 24.6%.

The other bit of data that AdDuplex provides is how quickly newer versions of Windows are being installed. You can see that Microsoft has gone through various trends throughout the years with Windows 10. Notice how quickly Windows 10 version 1803 was adopted. That was back when Microsoft started pushing updates to everyone. However, it flew too close to the sun, and with the following version, the company got so bold that it even skipped the Release Preview ring of the Windows Insider Program. That ended up having to be pulled, after Windows 10 version 1809 started deleting some users’ files.

After that, Microsoft revamped the whole update process. It no longer forced updates on users unless you were using a version that was nearing the end of support. You can see after that, adoption times were longer. With version 21H1 though, it might be a bit quicker than in previous years. Perhaps that’s because these updates are nothing more than enablement packages now.

Next: JioPhone Next Has Branding Gaps from LYF It Needs to Recover From: Opinion