In the world of technology, cutting-edge, headline-grabbing hardware always begin life as premium, expensive features, only to be commoditized later and become affordable for the masses. In many industries, that lifespan of exclusivity can last years, but in the fast-moving, cut-throat Chinese smartphone space, it is often a year or less.

That's what has happened with the pop-up selfie camera and in-display fingerprint reader, features that seemed impossibly futuristic and dropped many jaws just last year. Now, they're features that are available on not just recent Android flagships, such as the Oppo Reno 10X or OnePlus 7 Pro, but even $250 devices like the Realme X.

Xiaomi's latest, the Mi 9T, which starts at $300, of course, keeps pace and offers an all-screen design courtesy of a pop-up camera and an in-display scanner, too, but it also commoditizes another hardware component that was considered a premium feature just a year ago: the triple-camera system.

That makes the Mi 9T arguably the best value of the bunch among the recent slew of really good mid-tier (sub-$400) releases. Sure, the Realme X is a bit cheaper, but it only has two main cameras–it's missing that crucial wide-angle lens–not to mention an older chipset; the Google Pixel 3A has a vastly superior main camera, but falls short everywhere else with a chunky bezelled design and no wide-angle camera.

While the Mi 9T is a good value because it offers all these features that were considered cutting-edge tech just eight to 12 months ago, it also makes the 9T somewhat of a boring device for someone like me who sees a lot of phones on a regular basis.

There's one hardware piece that separates the Mi 9T from other similar releases such as the Realme X or Oppo F11 Pro: the Mi 9T runs on the Snapdragon 730, the newest of Qualcomm's semi-premium line of chips that's a tier below the flagship 855, but better performing than the Snapdragon 710 used in the Realme X.

The difference in performance between the 730 and 710 are negligible, to be honest, but it is better suited for real-time computational tasks, which helps it stabilize videos and find better balance in photos.

The power button is in red, which is a nice touch.

Day-to-day performance has been smooth, with the 4,000 mAh cell easily lasting a full day. Charging is done via USB-C, which is good news because Oppo, Vivo and Realme's mid-tier phones all use micro-USB. 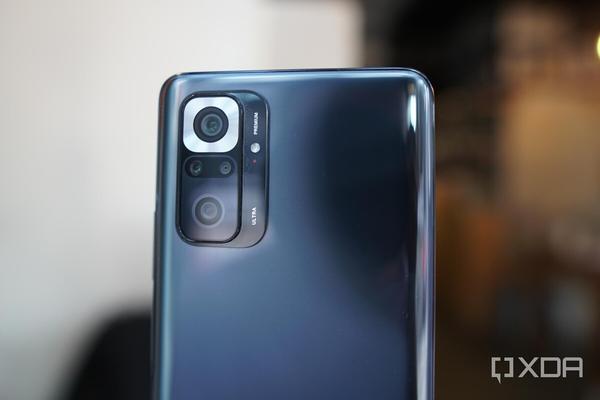 The uninterrupted screen has a resolution of 1080p, which is crisp enough to look great indoors. Outdoor visibility under direct sunlight is solid for a mid-tier device, though more expensive phones fare better. There's only a single-bottom firing speaker and it's pretty weak; but there is a headphone jack to compensate.

In terms of specs and focal length, the triple camera system of the Mi 9T is hardly new; but it is the first time a phone at this price range is offering the full slate of 48-megapixel main lens, wide-angle camera, and telephoto lens, and the results are mostly fine.

Still photography appears sharp during the day, with the color temperature veering to the warmer side a la iPhones instead of the cooler Huawei/OnePlus end. Xiaomi's camera algorithm at producing artificial depth-of-field blur has been excellent since the Mi Mix 2S, and it's the same story here. Bokeh images routinely turn out impressive.

At night, the camera struggles with noise and grain when shooting in auto mode, but there is a night mode to compensate.

And with night mode turned on.

Another sign of Xiaomi's computational camera prowess is its impressive distortion correction, which is done in real time, instantaneously after a wide-angle shot has been captured. Even more expensive phones from Samsung and LG still don't quite get them right. However, the wide-angle lens' f/2.4 aperture does not pull in nearly as much light as the main lens' f/1.8 aperture, resulting in jarring differences in lighting between an auto "normal" photo and a wide-angle photo.

This photo is nearly distortion free.

Two images side-by-side: a normal shot and a wide-angle shot.

Selfies are hit and miss. The Mi 9T's camera module elevates and retracts at a relatively slower speed compared to the OnePlus 7 Pro or Oppo Reno, taking about half a second. And while selfies under good lighting are fine, in darker locations they become virtually unusable, and it has a poor dynamic range in challenging situations such as against backlight compared to the iPhone XS or OnePlus 7 Pro, though to be fair, they are more expensive handsets.

Notice the Mi 9T's selfie struggled against backlight. The OnePlus 7 Pro fared the best of the... [+] three.

Where the Mi 9T's camera surprises is in video performance: the EIS (electronic stabilization) is excellent here, not just compared to other mid-tier handsets, but even against flagships. Videos shot at 1080/30fps and 4K/30fps are silky smooth even as I'm walking. Even wide-angle video footage is clean and smooth. In terms of video stability and image quality, only LG's and Apple's recent handsets are clearly superior.

The Mi 9T runs on Xiaomi's MIUI 10 and it's a fine skin. Chinese Android skins all used to be objectively terrible as recently as 2017, but Xiaomi and Oppo have really improved their respective software to be tolerable, even for a very critical power user such as myself. There's plenty of customization options here, including a system-wide dark mode, and multiple navigation style to choose from, including a swiping gesture navigation that is so good, the next version of Android coming this fall will adopt.

That the Xiaomi Mi 9T launched to little fanfare is understandable, considering Chinese phone brands are pumping out so many handsets. But it also reminds me of how spoiled we've been, or at least me, a reviewer based in Hong Kong, arguably the best place for a phone enthusiast.

I still remember the genuine excitement I felt when Xiaomi introduced the first "bezel-less" phone back in late 2016, and my giddiness when I first laid my hands on the device. Now, two and half years later, I barely gave the Mi 9T a second look when I took it out of the box. To trained eyes like mine, the Xiaomi Mi 9T isn't exciting; not a single thing about it is new.

But if I take a step back and examine these developments through the eyes of the average consumer, and it's hard not to be impressed by what Xiaomi is doing here. It is giving us features that were reserved for premium "expensive" handsets just a year ago in an affordable $300 package. There are few industries that continue to improve the value proposition for consumers like the smartphone space. At this rate of commoditization, we may be able to get those $2,000 foldable 5G phones that Samsung and Huawei are selling soon for $500 by 2021.

Next: Vivo V23 Pro vs OnePlus 9: Specs, features, and price in India compared