Catholic priest Flaviano "Flavie" Villanueva walks with funeral workers in protective suits as they carry the remains of a victim of an alleged extrajudicial killing at a public cemetery in Manila, Philippines, on Sept. 17, 2021. The remains were exhumed after the contract expired for the rented grave. Aaron Favila/APhide caption

MANILA, Philippines — On a recent morning, 44-year-old Lorna Macatuggal showed up at Tala Cemetery in Caloocan City, north of the capital, to oversee a difficult task: the exhumation of her brother Jefferson Macatuggal's remains.

Her brother was shot deadat age 38 on March 29, 2017, and she says she believes vigilantes marked him as a drug dealer and killed him. That would make him one of the thousands killed during Philippine President Rodrigo Duterte's war on drugs.

At the time, Macatuggal didn't have the money to put her brother's body in a permanent grave — so she rented one.

She says she paid a little over $700 for a five-year lease on what Filipinos call "rental gravesites" or "apartment graves." That's cheaper than the typical $900 families pay for such a lease, which is the average monthly salary for most Filipinos. Meanwhile, a more permanent gravesite can cost as much as $2,000 for a 30 to 40-year lease.

The remains of Jefferson Macatuggal sit in a black body bag after being exhumed from their temporary burial site in Tala Cemetery. The remains will be cremated as part of Project Arise, which helps poor families of drug war victims who cannot afford to renew the leases on rented gravesites for their loved ones. Ashley Westerman for NPRhide caption

Now, the lease on her brother's gravesite is about to expire and, even though Macatuggal and her husband both have jobs, they don't have the money to renew it. She takes care of six kids, she says. Three of them are her own; three of them the orphans of her brother. If she cannot pay to renew the lease, Jefferson's bones will be exhumed and thrown into a mass, unmarked grave with others whose loved ones could not afford permanent burial sites.

"We feel uneasy," Macatuggal says. "If he gets transferred [to a mass grave] we might not be sure if that's even our brother anymore in that compilation of bones."

So, when she heard about a program that would cremate the remains and find a permanent resting place for the ashes — free of charge to her — Macatuggal jumped at the chance to participate.

"Since they lost their loved ones, usually their bread winners, they are not able to afford to procure their own private land or box to place their loved ones," Catholic priest Flaviano "Flavie" Villanueva tells NPR.

He's the 52-year-old founder of Project Arise,an offshoot of his more well-established Program Paghilom, a Catholic nonprofit that has helped widows and orphans of victims with food assistance, counseling resources and other services since Duterte's war on drugs began in 2016.

The idea for Project Arise is simple: Families agree to have their relatives' bodies exhumed from their temporary graves to be cremated, and then the ashes are placed in a more permanent location. 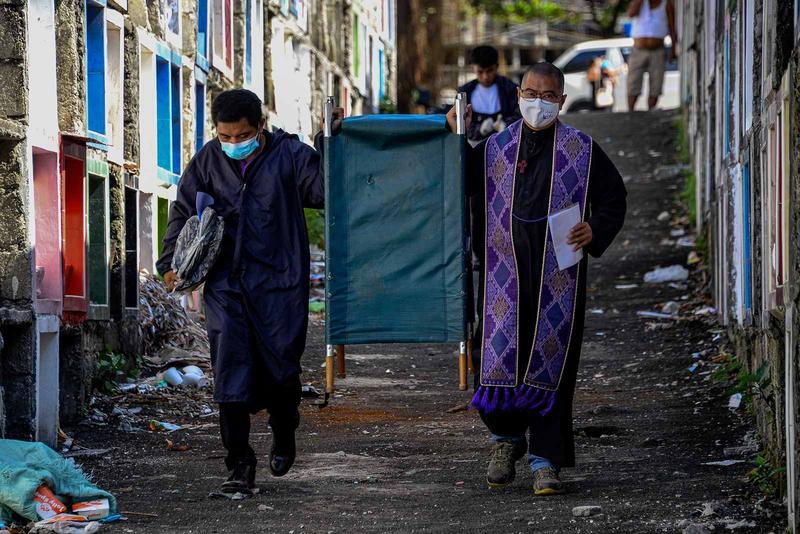 Villanueva walks together with other priests and their lawyers after appearing in court on Feb. 11, 2021, in Quezon city, Metro Manila, Philippines. Ezra Acayan/Getty Imageshide caption

Villanueva walks together with other priests and their lawyers after appearing in court on Feb. 11, 2021, in Quezon city, Metro Manila, Philippines.

Since launching in April 2021, the project has exhumed and cremated over 50 bodies, at no cost to the participating families. That's only about 18% of the nearly 300 families in Program Paghilom with loved ones killed in just 2016, according to Villanueva.

But providing this service is not cheap. The entire process costs around $900 per case, Villanueva says, and that does not include the more permanent resting place, such as a plot of land or burial box purchased for the family, for the ashes. To ensure the program remains free, he's been borrowing money from friends and relying on donations from other private citizens in the Philippines. Sometimes a generous, anonymous benefactor will sponsor a whole family, but that's rare, he says.

This weighs on Villanueva's mind as he knows this difficult work will be ongoing for a long time, because as each year passes, more "apartment grave" leases will inevitably come up for renewal. Ultimately, thousands of families could find themselves in the same exact position as Macatuggal in the years to come.

Thousands have died, many in extrajudicial killings

The Philippines Drug Enforcement Agency recorded more than 6,200 suspects killed during anti-drug operations from July 2016 to November 2021. But reports from human rights groups and the United Nations say the real death toll could be between 12,000 and 30,000. including thousands of people killed outside of official police operations.

Most of the deaths are from extrajudicial killings, rights groups and researchers say, the victims' families never receiving any justice or closure. The police may write up a report on the incident, but further investigations requested by families can languish for years.

Macatuggal believes her brother was one of those victims.

According to a police report reviewed by NPR, a preliminary investigation found that a shooter appeared from behind Jefferson Macatuggal, fatally shot him, and then "fled to [an] undisclosed destination." Police could not identify the suspect or determine a motive at the time, the report says.

The family chose not to seek further investigation, not knowing how or where to start, the victim's sister says.

Project Arise is for the dead and the living

As the priest Villanueva says, the project is meant to help both the dead and the living.

"For the families who were robbed of the opportunity to grieve," he says. "If they do this in a proper way, with the proper guidance, I think there's a better chance that their tomorrows will be better."

After the bodies are cremated, he turns the ashes over to the families in a personally engraved, white marble urn. The handover typically takes place during an emotional ceremony held in a church. The families get to keep the urns for a while but are then asked to place them in a final, more permanent resting place.

Karen Gomez-Dumpit, a commissioner with the Philippines Commission on Human Rights, attended a recent handover ceremony. She says the commission, which is an independent, constitutionally mandated body that investigates alleged human rights violations, is thankful for programs like this because they "help the poorest of the poor."

"The drug war has actually been employing 'othering'; they say [poor people allegedly involved with drugs are] not humans," Gomez-Dumpit says. She notes many observers have described the anti-drug campaign as a war against the poor.

"Father Flavie witnesses that every day by helping out these families," she says. "So, we're really very grateful for his work and the foundation, but it really takes a village to help these families find healing."

The family of Jefferson Macatuggal may also finally be able to find some healing in laying his body to rest in a more permanent and dignified place.

Following the exhumation of her brother's remains, Lorna Macatuggal says that while she feels a mixture of both sadness and anger, a sense of peace has come over her. She says she hopes Project Arise can help other families finally feel that same peace.

Next: Phones launched this week (India and global): Xiaomi 11T Pro, Realme 9i, and more