Even without Chris Paul, the Phoenix Suns had no struggles whatsoever against the Lakers on Sunday as they blew out the Lakers at home, 125-93.

The Lakers looked the better team for all of eight points on Sunday as they lead 6-2 before being waxed by Phoenix over the ensuing 46 minutes. LeBron James did all he could on the night with 31 points, seven rebounds and six assists but only Carmelo Anthony had more than 13 points through the opening three quarters.

Meanwhile, the Suns set all sorts of season-high records for points in a quarter, a half and the opening three quarters as they had 33 assists to five turnovers before the benches emptied for garbage time in the fourth quarter. Devin Booker had 30 points and DeAndre Ayton punished the small ball Lakers with 23 points and 16 rebounds.

As has repeatedly been the case for the Lakers this season, being shorthanded is a valid excuse but the repeated lack of effort or perceived care is not acceptable. But the team has long given up on the season and them giving up very early into Sunday’s game is not as surprising as it should be.

Like the fans, it’s becoming increasingly apparent that the team is simply counting down the days and games until the end of the season and Phoenix was just another tick off the board.

After the Lakers scored six of the first eight points, the Suns responded with 14 unanswered, capped off with a pair of 3-pointers from Devin Booker. James broke the run out of a time — the second of the first quarter for the Lakers — with a pull-up jumper.

All that did, though, was further anger the Suns who then opened up a 27-11 advantage with a slew of open shots in transition and empty offensive possessions for LA. Back-to-back 3-pointers from Jae Crowder and Aaron Holiday saw the lead balloon 35-14 and force head coach Frank Vogel to use his third timeout of the opening quarter. 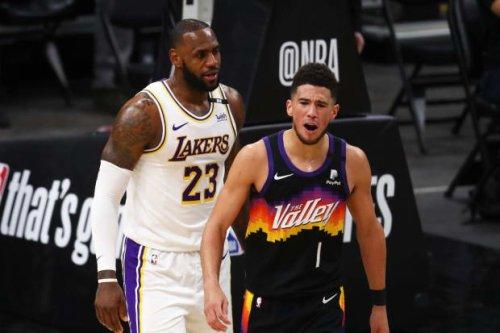 By the time the first quarter buzzer rang, the Suns had hung 48 points on the Lakers and held a 26-point lead. As the Lakers attempted to cut into the deficit in the second quarter, James did record his 10,000th career assist, making him the first player in league history with at least 10,000 points, 10,000 rebounds and 10,000 assists.

The Lakers did get the deficit to 18 points in the opening minutes of the quarter, the team never made much of a viable run to put the lead in doubt. And, predictably, Phoenix eventually responded with their own run to push the lead right back to 28 points after a layup at the rim in transition by Booker.

The Suns and Booker closed the first half in style with the All-Star guard notching his 20th point on a fastbreak dunk as Phoenix scored 79 points in the opening two quarters, the most points allowed by the Lakers in an opening half this season.

The third quarter featured Dwight Howard starting in place of Stanley Johnson both nothing changed in terms of the gameplay as the teams traded baskets and runs. The end result, though, was the Lakers still being thoroughly outplayed by a far superior Suns team.

James continued his scoring output but a complete lack of stops defensively and very little contributions offensively outside of James meant there was never much of a run from the Lakers. Through three quarters, James outdueled Booker with 31 points to the younger guard’s 30, but the Suns completely controlled the game with a 29-point lead.

The two sides played only a few minutes with rotation players in the fourth before the benches emptied with end-of-rotation guys over the final nine minutes of the game.

The Lakers will immediately be back in action on Monday as they return to Los Angeles to meet the Raptors in a back-to-back. Tip-off is set for 7:30 PT with the game broadcast on Spectrum SportsNet.