This is your very first look at the OnePlus Nord 2T.

OnePlus Nord series is expanding at a steady pace globally and in India. The company had introduced the OnePlus Nord 2 last year in June, with a cheaper alternative, the Nord CE 2 5G, arriving last month. It appears the brand is not done with the Nord 2 series yet as OnePlus is said to be working on a new OnePlus Nord 2T device. The phone is reportedly being tested in India. Now, 91mobiles exclusively brings you your very first look at the OnePlus Nord 2T design through a render provided by an industry source. The picture shows off the back design in full glory.

OnePlus Nord 2T has a unique rear design with a sandstone finish and a rather large camera module. The phone appears to have a Black sandstone finish on the back, going back to the original OnePlus One and OnePlus 2 Sandstone Black days. The camera module, however, has a blue-colour matt finish. There are two circular rings within the module. While the top ring has a rather large primary sensor, the bottom ring houses dual cameras. There are two LED cutouts beside the camera rings. Earlier reports have suggested the phone will come with a plastic frame.

While the front design is under wraps, sources have informed us the OnePlus Nord 2T will look familiar, with a punch-hole camera on the top left corner to accommodate the selfie snapper. That’s pretty much it about the phone in terms of design. 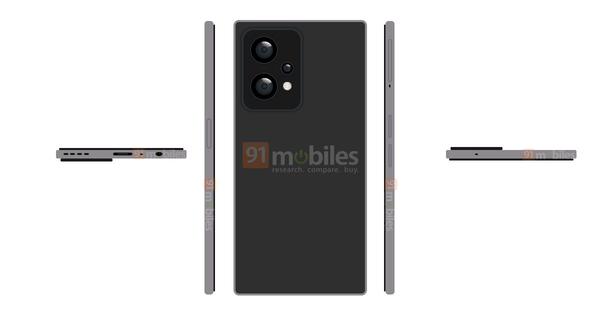 Some OnePlus Nord 2T specifications have leaked online. It is said to come with a 6.43-inch FHD+ AMOLED display with a punch-hole cutout, 2400×1080 pixel resolution, slim bezels and a 90Hz refresh rate.

Rumours suggest that OnePlus Nord 2T will pack a 4,500mAh battery with support for 80W SuperVOOC charging, the same tech that is seen on the OnePlus 10 Pro flagship. Moving to optics, the phone will have triple cameras on the back, comprising of a 50MP primary sensor, an 8MP ultrawide camera, and a 2MP monochrome sensor. It could get a 32MP sensor on the front.

OnePlus Nord 2T launch timeline is said to be between April-May, according to earlier reports. This means we should start hearing from OnePlus as we inch closer to the launch timeline.