Most people probably use one or two messaging apps. Some would have more than three, especially if they belong to a lot of groups or communities. Then there are those that have more than one account for some of their messaging apps as well as other social media apps. Aside from having two (or more) phones, your only choice would be to have two accounts on one device but not all apps allow that. Samsung had a Secure Folder option for Nougat updated devices, but now they’re bringing it as a new feature to the Galaxy J7 (2017) devices. 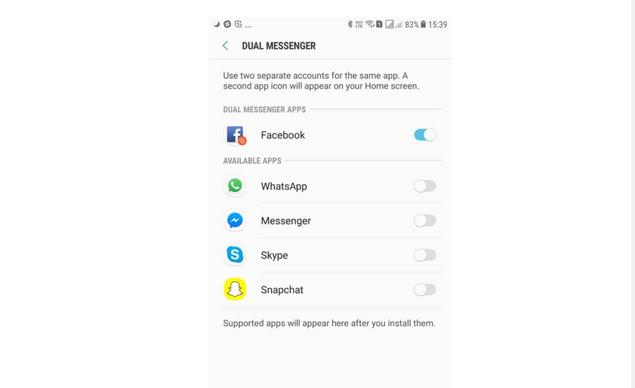 This feature is called, obviously, Dual Messenger and will be found in all Galaxy J7 (2017) devices. Basically, what it does is to install a separate copy of the app on your device so you can sign in with a different app than in the original copy of the app. You’ll be seeing two shortcuts of the same app and you just have to tap on whichever you want to use at the moment. You just use them as you would two different apps. However, you will probably have to label the two apps differently to avoid confusion.

Some of the apps that they support include WhatsApp, Facebook, Facebook Messenger, Skype, Snapchat, etc. Those apps that already officially support dual (or even multiple) logins will not show up in the list of supported apps of course. Just go to the Settings > Advanced Features menu. Just enable it and then choose which apps you want to have dual shortcuts. You will even be able to use both at the same time in the Multi Window mode.

If you don’t have a Galaxy J7 (2017) smartphone but have your Android Nougat Samsung device, you can still use the slightly more complicated Secure Folder feature. No news yet if the simpler Dual Messenger will eventually show up in other Galaxy devices.

Next: How to root your Samsung Galaxy J7