"Buy the dip." "Keep your powder dry." There are widely divergent views about what you should do in the midst of the current volatility in the stock market.

My personal opinion is that Warren Buffett has the best approach. The legendary investor has ledBerkshire Hathaway ( BRK.A 0.41% ) ( BRK.B 0.40% ) in building up its cash stockpile. At the same time, though, Buffett has been selectively buying a few stocks that look attractive.

But there's one thing that Buffett isn't doing (at least, not that I know of) that many investors should seriously consider. Here's a fantastic way to invest $10,000 right now.

The I's have it

What's the biggest problem with investing in stocks? I'd rank "not knowing for sure if you're actually going to get a positive return" at the top of the list. That's especially applicable over a relatively short duration, and when there's a lot of uncertainty -- as we're seeing now.

However, there are also a couple of big problems with investing in bonds today. Bond yields are low. And with the prospects of higher interest rates on the way, bond prices will likely fall.

I don't think you can go wrong buying one type of bond right now, though. The Series I savings bond offers an annual interest rate of 7.12%. No, that's not a typo. The bond's interest rate is really that great. 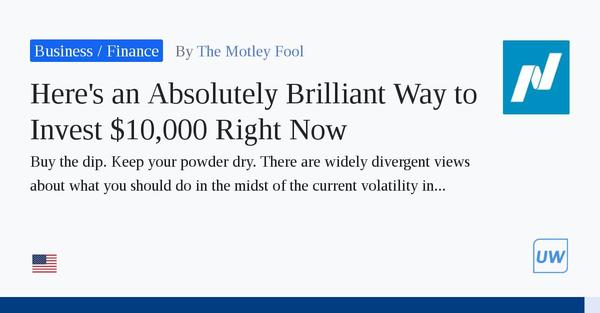 Why does the Series I bond have such a high interest rate? The "I" in its name stands for inflation. Rates for Series I bonds are established based on inflation, which is again rearing its ugly head in a major way.

The clock is ticking

You can buy Series I bonds in a couple of ways. Electronic I bonds can be purchased through the U.S. government's TreasuryDirect website. Paper I bonds can be bought using your federal income tax refund.

However, the clock is ticking to lock in that 7.12% interest rate; the rate will change after April 2022. Of course, if you want to buy paper bonds with your federal income tax refund, there's an even tighter window since the deadline for filing income taxes is April 18, 2022.

You can still buy Series I bonds after April. But the interest rate could be different.

It's important to know about a few drawbacks with buying I bonds. Unfortunately, that $10,000 figure I used wasn't just plucking a random number out of the air. You can only buy up to $10,000 of electronic I bonds within a calendar year.

If you are due a federal income tax refund, though, you can also purchase up to $5,000 in paper I bonds. For anyone with a big enough refund, it's therefore possible to buy up to $15,000 of Series I bonds this year.

Also, that great interest rate comes with a catch. You'll receive that rate for the first six months after purchasing the bonds. But after that, a new rate will be in effect.

This isn't necessarily bad news, though. Remember, I bond interest rates are based on inflation. If inflation increases, your interest rate will also increase. And the worst thing that could happen is that your rate drops to 0%, which would translate to annualized interest of 3.56%. Based on current economic dynamics, my hunch is this worst-case scenario is highly unlikely.

Finally, you'll need to hold the I bonds for at least one year before you can sell them. And if you cash in before holding the bond for five years, you'll forfeit the last three months of interest (although there could be exceptions for anyone affected by a disaster).

Could you potentially make more money over the next 12 months by investing in a stock such as Buffett's own Berkshire Hathaway? Sure. Over the longer term, I have no doubt that Berkshire (and many other stocks) will generate much higher returns than Series I bonds will.

But there are no other investment alternatives that offer a guaranteed minimum 3.56% return, with the prospects of much higher returns that are backed by the full faith and credit of the U.S. government. Investing $10,000 in a no-way-to-lose proposition seems like a brilliant move for investors with a long-term mindset.