Many of you are probably familiar with the phrase “cat videos are taking over the internet.” They appear to be everywhere, especially on Facebook, where some cats have become celebrities. With such widespread popularity, it’s only natural for cats to make their way into non-fungible tokens (NFTs) and video games. In July 2021, the Cool Cat NFT collection was released, immediately becoming one of the most popular digital collectibles on the blockchain.

Cool Cats are a collection of 9,999 randomly generated NFTs on the Ethereum blockchain. Most Cool Cats NFTs have features that are randomly assigned by an algorithm. The rarest Cool Cats NFTs are manually assembled. There are 300,000 body, face, hat and outfit feature combinations.

Each Cool Cats NFT has a different level of coolness, rated from 3 to 10. The NFTs are then divided into four classes of coolness, and most have a coolness points rating somewhere between three and six. The four coolness classes include:

On February 9, the Cool Cats team released a new NFT collection called Cool Pets. Another release was the debut of Cooltopia by Cool Cats, a new type of game where you can send your Cool Pets on quests.

What Are Cool Pets?

Cool Cats’ creators have just released a new NFT collection called Cool Pets. Cool Pets is a collection of NFTs generated at random that you can interact with to help them grow. If you are fortunate enough to obtain one, you will receive it as an egg. The developers plan a total of 19,999 Cool Pets, 9,999 for Cool Cats owners and 10,000 for the Cool Pets mint event.

It will take some time to raise your Cool Pet. The Cool Pet must pass through four stages: egg, hatching, hatched and final form. You advance through these stages by purchasing pet items, which you then use to interact with your Cool Pet. To purchase chests containing your Cool Pets items from the Cool Shop, you will need MILK tokens.

To grow your Cool Pet, you give it items from the chest to play with or eat. The final form of your Cool Pet is primarily determined by which items you use to interact with it.

Sending your Cool Pet on quests in Cooltopia will earn you MILK tokens. Not all quests are created equal; their rarity ranges from common to legendary. The more difficult the quest, the more MILK tokens you will receive. Each Cool Pet can complete up to ten quests per day. If you own a Cool Cats NFT, you earn MILK tokens by holding them.

What is MILK Token (MILK)?

The MILK token is the Cool Pets play-to-earn game’s in-game currency. The token increases interactivity in the game and gives players more utility with more activities for players to do while playing the game.

MILK tokens are ERC20 tokens that reside on the Ethereum and Polygon blockchains. MILK tokens provide utility to users while in Cooltopia. The developers have created just over 60 million MILK tokens created and in circulation. 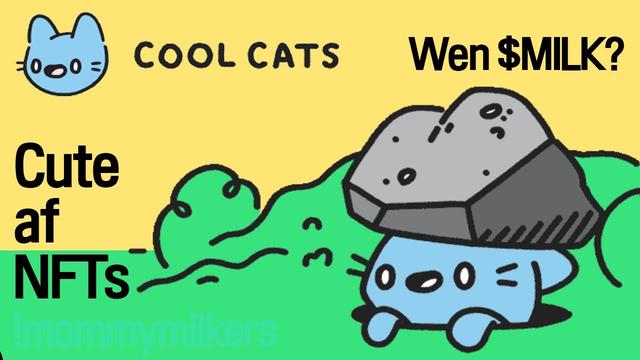 Check here for an in-depth explanation of NFTs.

How Does MILK Token Work?

So, how do you get MILK tokens, and what can you do with them? You can buy them from the QuickSwap exchange, or you can earn them in-game. If you are a Cool Cats NFT owner, you will also passively receive MILK tokens.

How to Buy MILK Token (MILK)

If you are lucky enough to own a Cool Cats NFT, you will earn MILK tokens. But what if you purchased a Cool Pets NFT during the public mint? In that case, you can use two ways to acquire MILK tokens. You could stake your Cool Pet egg in the Adventurers Guild and passively earn MILK tokens. Or, you can buy MILK tokens outright from the QuickSwap exchange. The following steps detail how to purchase MILK tokens.

Most exchanges don’t support Milk token. The best way to purchase Milk token is through a decentralized exchange, such as QuickSwap. You’ll need to trade Polygon tokens for MILK –– here are a few good exchanges for buying Polygon.

Gemini is a cryptocurrency exchange and custodian that offers investors access to over 100 coins and tokens. Founded in the US, Gemini is expanding globally, in particular into Europe and Asia. Offerings include both major cryptocurrency projects like Bitcoin and Ethereum, and smaller altcoins like Orchid and 0x.

Gemini is 1 of the only brokers with multiple platform options based on skill level. New investors will love the streamlined interface of Gemini’s mobile and web apps, while advanced investors might appreciate all the tools that come with ActiveTrader.

In addition to a host of platform choices, Gemini users also have access to insured hot wallets to store tokens without worrying about digital asset theft. Learn more about what Gemini can do for you in our review.

Coinbase is one of the Internet’s largest cryptocurrency trading platforms. From Bitcoin to Litecoin or Basic Attention Token to Chainlink, Coinbase makes it exceptionally simple to buy and sell major cryptocurrency pairs.

Though Coinbase doesn’t offer the most affordable pricing or the lowest fees, its simple platform is easy enough for complete beginners to master in as little as a single trade.

What Determines Demand for MILK Token?

MILK tokens are a new cryptocurrency launched about a month ago, so demand (trading volume) is low. What will impact the demand for MILK tokens? One of the biggest drivers of demand will be the game’s popularity.

Play-to-earn video games are still relatively new but seem to be gaining traction. Players earning crypto playing online games should continue to be an attraction, drawing in new players. Ultimately, the Cool Pets game will have to be interesting enough to build popularity among players.

As you can see by the chart above, even the wildly popular Axie Infinity game took months to gain traction. It is very possible that the Cool Pets game could follow a similar path.

Another driver of demand could come from speculation by investors. Currently, MILK tokens are only available at one crypto exchange, QuickSwap. If MILK tokens are added to major exchanges, that could be a huge demand driver.

With President Biden’s announcement of his Executive Order to study the crypto industry and potentially establish a federal digital currency, the price of Bitcoin around the low $40,000 price level. Going back to mid-January, the weekly 100-day exponential moving average has been a source of solid support for Bitcoin. Whether or not that continues is unknown at this time.

Is MILK Token A Good Investment?

Many factors will influence whether MILK token is a good investment. How well game players embrace the Cool Pets game is chief among them. The state of the crypto markets will also play an important role. A prolonged bear market would most likely keep downward pressure on the price of MILK tokens.

Next: The Most Boring Thing Apple Just Announced Could Be Its Most Important Product