Ever since phone makers have started refreshing their phone line-ups multiple times a year, they’ve inadvertently also made us believe that expecting huge upgrades over a single generation is foolish. Case in point, the INR 9-11K offerings from Realme, Redmi, Samsung are all more or less still stuck with specs from early 2020. No wonder then, when the Infinix Hot 10s launched in May this year, I was supremely happy with the class-leading specs it brought along. But if you read my text review (click here), there were also some big cons with the device, which I believed we could still live with, seeing that the competition wasn’t doing anything better anyway.

Cut to 4 months later, Infinix drops the Hot 11s, and the sheer amount of upgrades it brings to the table, should definitely put all the other big brands to shame. I’ve been using the Hot 11s for about a week now, and I can safely say that this is the most impressive phone under 11K that I’ve used in the last 2 years. What makes it so good, and should you consider buying it; here are all the answers you are looking for.

Infinix Hot 11s: What Makes It So Good?

The most impressive upgrade on the Infinix Hot 11s has to be the display. They switched to a punch-hole cutout from a water-drop notch, bumped up the resolution to 1080p from 720p, increased the peak brightness from ~440 nits to 500nits+, AND managed to retain the 90Hz refresh rate. This is by far the most impressive display I’ve seen on a phone under 12K this year. While the BBK brands are still stuck with 720p displays, Xiaomi’s 1080p displays aren’t any good either as they have very poor brightness and viewing angles. However, the lack of Widevine L1 means you still can’t stream Netflix. Prime Video etc. in Full HD, but that’s a software problem which we will come to later.

The 90Hz refresh rate coupled with 180Hz of Touch sampling means this phone feels deceptively smooth to use, almost making you forget that it’s a 11K phone.

Sound output via the speakers has seen an upgrade too, with the Hot 11s now using the earpiece as a secondary speaker. It still sounds a bit too thin and the dedicated stereo setup on Redmi phones is definitely a notch above. The headphone jack can also pump out just about average quality audio on wired earphones.

The next big improvement comes in the charging department where the Hot 11s not only switches to a Type-C port, but also comes with an 18W fast charger in the box. The charging speeds are nothing extraordinary though, with the phone still taking about 2.5 hours to charge from 0 to 100%, but this is still the best charging speed you can get at this price. Battery capacity has taken a hit though, with the 6000mAh cell on the Hot 10s making way for a 5000mAh one here. Battery life is good nevertheless, with about 6.5 hours of S.O.T spread over an entire day. For context, the Redmi 10 Prime with the same specs and a 6000mAh battery can last about 40 minutes extra on a single charge.

Infinix Hot 11s: Does It Look Good Though?

The Hot 11s features an all-plastic construction. It’s the same glossy panel with a fingerprint resistant coating that we’ve been seeing on Infinix phones since a while now. I’m not really a fan of how it looks but on the bright side it doesn’t smudge or scratch easily and that’s a huge plus in this segment. The new wavy gradient pattern does look unique, although I would love to see Infinix come up with an entirely fresh aesthetic soon, like on their Zero series.

For what it’s worth, there is a new camera island design with a huge circular main camera that does make this phone stand out from the past Infinix phones. The camera module doesn’t protrude out of the body too much, and the phone itself isn’t too thick either. That being said, it’s not a sleek phone either with about 200 grams of weight. Not sure if it’s the width of the device or just how the back curves into the sides, but this phone isn’t particularly ergonomic, or comfortable to hold single-handed.

Coming to the ports and buttons, we get the power button and volume rocker on the right side, with the bottom being occupied by a 3.5mm jack, the sole microphone, a Type-C port and the speaker grille. On the left is the triple card slot with space for 2 4G SIMs and a microSD card. Pretty standard stuff. 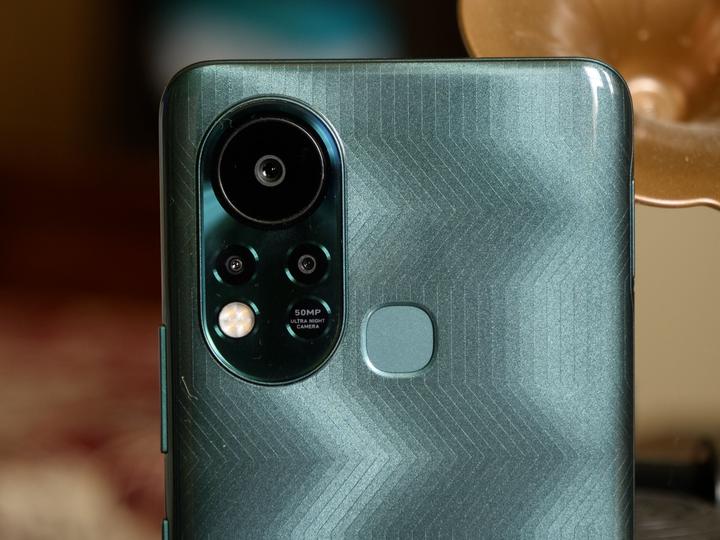 Infinix Hot 11s: What about the Cameras?

The last upgrade comes in the form of a 50MP main camera at the back, with a wide aperture of f/1.6. 50MP sensors are the new craze in the budget segment, and Infinix did well to act on it this early. The camera performance is definitely improved over the Hot 10s, especially in low-light conditions. Infinix is doing a great job at improving their image processing algorithms, and the difference between the 11s and Redmi 10 Prime’s camera performance is almost negligible. I would still like to see a bit more consistency in human skin tone processing and white balance accuracy in tricky lighting situations.

Selfies are still taken from an 8MP shooter and it does just about enough to churn out decent looking photos. The details go for a toss if the lighting conditions are anything but optimal, but what saves the Hot 11s is that most other phones in this segment are at the same level too, if not worse. The dedicated LED flash up front does help you capture slightly better selfies than the screen flash selfies of the competition.

Video recording is still capped at 2K 30fps, which is better than the 1080p 30fps most competition offers, but the lack of any kind of image stabilization is a bummer. The details and dynamic range performance has definitely improved though, maybe owing to the new sensor. One area where Infinix still lags behind is mic quality. The Hot 11s comes with a single mic and voice recording during videos is no match to the dual mic recording on phones like the Redmi 10 Prime. Check out my video review of the Hot 11s for detailed analysis of the camera performance againstRedmi 10 Prime:

The other 2 cameras on the back, an AI lens and a depth sensor are there just to make the phone a ‘triple camera’ phone. I really hope Infinix stops the AI lens gimmick. I didn’t think I’ll be saying this ever but even a 2MP Macro camera would have been welcome here.

Now the one upgrade that still didn’t happen is an Ultrawide camera being present. To be fair though, we’ve seen phones costing 15K and above launch without Ultrawide cameras, so we can let this one slip. Next time?

The Hot 11s currently comes in only one memory configuration: 4GB of RAM coupled with 64 gigs of eMMC 5.1 storage. No UFS 2.1 here, which could have helped speed up app opening/installation times etc.. That’s not a huge deal-breaker though since the Helio G88 processor present here can easily push the 90Hz refresh rate screen to deliver mostly smooth daily performance. I rarely faced any stutters or lags here, however there were times when a particular app just took 1-2 seconds extra to load up.

For those who don’t know, the Helio G88 is a slightly tweaked version of the G85. I say tweaked and not overclocked, as the clock speeds, performance numbers etc here are unchanged. The only changes come in the ISP where it can now support 64MP cameras as opposed to max 48MP supported by G85.

So expectedly, there’s no real improvement in the gaming performance here as well. For the most part, you can easily enjoy casual sessions of BGMI or COD here. However it can’t run these games at more than 40fps even at the lowest graphics settings. Long gaming sessions will make the phone stutter and drop frames after about an hour or so of continuous gaming. If you want better performance, you’ll have to spend at least 2K extra and get a phone with SD720G/732G or Helio G95.

Infinix Hot 11s: How about the Software Experience

Coming to the software experience, we get Android 11 with XOS 7.6 on top. I talked about it at length in my Infinix Hot 10s review so do watch that for all the fine details. But suffice it to say, the software experience here is more or less on par with everything else you get in this segment. Yes there are a lot of pre-installed apps, bloatware, and random notifications, but you can delete/disable most of them. Features-wise you get everything, from customization options to dark mode to screen recorder and more. Infinix’s Social Turbo features are really interesting too.

Network performance is as you’d expect from a phone in this range. I would have loved to see support for Carrier Aggregation here, but that isn’t the case. Otherwise 4G network performance is okay. The phone supports Dual-Band WiFi so that’s covered. As far as call quality goes, the earpiece is really loud for what it’s worth, but the voices sound a bit thinner than normal. For unlocking, the 2D face unlock is super fast and accurate. The rear mounted fingerprint scanner works fine but it feels ancient now compared to the more intuitively placed side mounted scanners.

Infinix Hot 11s is currently selling for Rs 10,999 for the sole 4/64GB variant. Now if that doesn’t sound impressive to you, Realme’s latest Narzo 50A sells for Rs 500 more, and has a mediocre 60Hz 720p LCD, a tiny single speaker, and a weaker chipset. The Redmi 10 Prime which matches the Infinix Hot 11s in terms of performance, display and speakers sells for Rs 12,499; albeit it also packs in an ultrawide camera. Currently, there’s no phone under 11K that gives you a screen as good as the Hot 11s, stereo speakers, a 50MP camera and fast charging. I can keep giving you more examples but the fact of the matter is that Infinix has truly hit the ball out of the park with the Hot 11s.

It’s not a perfect phone ofcourse. I would have loved to see an actually functional secondary camera on the back, instead of the gimmicky AI lens. UFS 2.1 storage would have been nice too. And yeah, support for Carrier Aggregation would have sweetened the deal even further. But seriously these are the only cons that I can think of about this phone. And that’s saying a lot considering the current options you have to live with in this segment. Furthermore, seeing how Infinix fixed much bigger flaws from the Hot 10s in such a short time, I can already imagine the Hot 12s taking the market by storm.

The only thing that could hold this phone back is the relatively nascent presence of Infinix in the Indian market, and the trust (or lack thereof) that people might have in the after-sales experience and software support from Infinix. Infinix hasn’t promised any software updates to this phone, so long term reliability is still a toss up, but they definitely have a wide network of service centres as available on their website.

As for now, I can definitely say that the Infinix Hot 11s is the most value-for-money budget smartphone you can buy right now, and I have no hesitation in recommending it to people looking for the absolute best display and performance in this segment.

Prev: Year Ender 2021: From Samsung to Realme to Nokia, smartphones under Rs 10,000 launched this year

Next: Galaxy A6 (2018) gets Android 10 firmware update at Sprint, Virgin Mobile - SamMobile