It's been about two years since Apple launched the second-gen iPhone SE, and this week the company unveiled its successor, the iPhone SE 2022. Rumors have been floating around about a refreshed iPhone SE for a while, but now that it's official you may be looking to replace your current iPhone SE with a new one. We've rounded up all of the best places for you to preorder one right now, along with all the best iPhone SE 2022 deals you can find today.

One of the biggest upgrades to the iPhone SE 2022 is that it now supports 5G, so you'll be able to get faster data speeds while out and about, assuming you're in a 5G-compatible area. Apple has boosted the processor up to its A15 Bionic chip and it has the same tough glass that's used on the iPhone 13 series. It maintains the same overall size and design as the previous-gen model, which means there's a Touch ID sensor on the front. A 12-megapixel camera on the back is made even more powerful thanks to the A15 processor.

When will the iPhone SE 2022 be available?

Apple announced the iPhone SE 2022 on March 8. The phone is available to preorder now, with in-store availability starting on Friday, March 18. 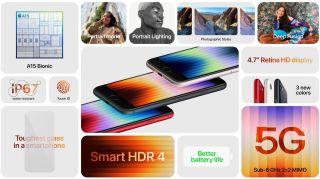 What colors will the iPhone SE 2022 come in?

You'll be able to purchase the iPhone SE 2022 in midnight (black), starlight (white) and Product Red.

While the iPhone SE may not get quite the same amount of attention as the iPhone 13 did or the iPhone 14 will, that doesn't mean there won't be any deals to take advantage of. We've rounded up all the best places to preorder the new iPhone SE, along with all the best deals that you won't want to miss out on.

Best Buy is one of the best places to pick up the all-new iPhone SE because it's one of the few places that will carry the carrier versions as well as the unlocked ones. It doesn't look like there are a ton of deals on the new iPhone SE right now, nor any special offer from Best Buy. We will update if that changes.

If you prefer to buy your new iPhone right from the source, you can do that for the iPhone SE. Apple has all the carrier models along with the unlocked one. You can pay the full retail price upfront or split it into 24 months of interest-free payments when you use an Apple Card during checkout. Apple also has a wide range of trade-in options.

It doesn't look like Verizon has any great offers for those looking to pick up a new iPhone SE like it has in the past for other devices. You can finance the phone for just over $11 a month for 36 months, or you can buy it outright starting at $429. If you bundle a new iPad Air and iPhone SE on payment plans, Verizon will give you a $150 credit towards the price of the new iPhone SE.

AT&T will offer the phone for full retail price or via 36 monthly payments starting at $12 a month for the 64GB model. The carrier will have all three colors and you can pick between 64GB, 128GB and 256GB.

New and existing customers on any Sprint or T-Mobile plan are able to save $400 on the iPhone SE when trading in an eligible device. This comes in the form of 24 monthly credits, but you'll only pay $29 (plus tax) for the iPhone SE.

Spectrum is another carrier that has the new generation iPhone SE available for preorder, though the deals are pretty slim. The only offer is that you can save $100 on the new SE (or any new Apple device) with a qualifying trade-in.

Next: The Surface Duo is Now a Windows Phone, Thanks to a Dedicated Fan