The new iPhone SE has essentially the same body as the 2020 model, but it uses the A15 Bionic chip that we've seen in the iPhone 13. The A15 chip brings faster processing speeds; Apple says that the new SE has a CPU that's 1.8x faster than the iPhone 8 and a GPU that's 2.2x faster. And while not every aspect of the new phone will use all of that power, such performance ensures years of support for new versions of iOS.

The iPhone SE has a single 12-megapixel rear camera and a 7-megapixel front-facing camera. The A15 chip also brings some weighty improvements to the cameras, including advanced features including Smart HDR 4, Photographic Styles and Deep Fusion.

Despite the addition of 5G support, which can be a big drain on a phone's battery, Apple claims the new SE has better battery life than the 2020 model. Some of those improvements might come from the A15 chip and iOS 15. But I'm curious to see if Apple also managed to cram in a bigger battery. 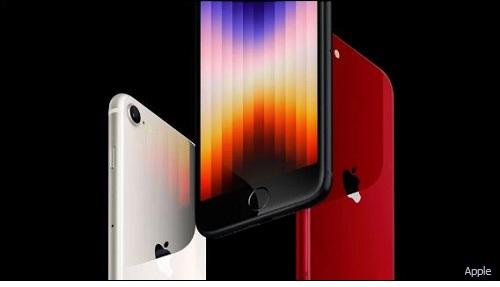 But for all the upgrades internally, plenty of things remain unchanged. The iPhone SE still has a home button with Touch ID and lacks Face ID. The 4.7-inch LCD display is the same one used on the 2020 iPhone SE and the iPhone 8, which came out in 2017. The back of the phone is still glass, but during the event Apple said it was the "toughest glass on a smartphone." But the SE doesn't seem to have a ceramic shield over the display like the iPhone 12 and 13 series.

The original iPhone SE, launched in 2016, cost $399. It combined the body of an iPhone 5S with the internals of an iPhone 6. The SE was an unexpected hit for Apple and appealed to people who wanted a small iPhone and an affordable one.

In 2020, Apple updated the iPhone SE, giving it an iPhone 8 body and the iPhone 11's A13 chip. The phone showed how much of an iPhone's capability comes from just the processor. Until today, the 2020 iPhone SE was the only iPhone Apple sold that still had the classic iPhone design: a large forehead, chin and home button.

In addition to the new iPhone SE, Apple released two new colors for the iPhone 13 and 13 Pro, along with a new iPad Air. For more on Apple's latest, here's what to know about next week's iOS 15.4 update. Plus, is the 2020 iPhone SE still a good buy? Check out our comparison of the 2022 iPhone SE and its 2020 predecessor.