Editor’s Note: This article has been updated since its original publication to include the result and updated stats following the Lakers’ win over Washington on Friday and the Lakers’ loss to Phoenix on Sunday, during which LeBron recorded his 10,000th career assist.

There is not a name for what LeBron James just accomplished – simply because it had never been done before.

Do we call it the career triple-double? How about the triple-quintuple? Yes, that last term sounds ridiculous, but so is the feat that LeBron just achieved after dishing out his second assist of the night during the second quarter of the Lakers-Suns game on Sunday in Phoenix.

LeBron’s 10,000th career assist came on a cross-court pass to Carmelo Anthony for an open 3-pointer as two of the game’s top 10 scorers of all-time connected for this historic achievement. LeBron not only established the 10K-10K-10K club, he entered the club with an extra 20,000 points to spare.

How do we put something that’s never been done before into the proper perspective? Let’s start by breaking down the accomplishment piece by piece.

Below is a look at the number of players that have hit the major scoring milestones in NBA history. Not only has LeBron scaled each rung of this scoring ladder, he was also the youngest player to reach each of these marks.

Throughout his career, LeBron has had a contentious relationship with the “scorer” label. When he passed Jordan as the NBA’s top playoff scorer of all time, he was adamant that he did not want to be referred to as a “scorer.”

“I’m not a scorer. I don’t want to be labeled as a scorer. I can put the ball in the hoop, but I’m a playmaker,” he said. “I’m a player. Put me on the court and I’ll find ways to be successful. When you talk about scorers, you have a lot of great scorers in our league of all time, guys that shot a lot of shots, volume shooters that score the ball at a high clip. I’m not one of those guys. I’m a guy that always got happy and excited in seeing my team be successful.”

Contrast that with his comments from a recent episode of his Showtime series The Shop, “When they talk about the best scorers of all time, they never mention my name.” James then added, “it pisses me off.”

This 30K-10K-10K feat proves both of those statements to be correct. LeBron is much more than a scorer and impacts all aspects of the game as his playmaking and rebounding numbers suggest and the eye test proves on a nightly basis. At the same time, when it comes to the scoring aspect of his game, LeBron is one of the best of all time.

After his second 50-plus point game in under a week on Friday and a 31-point game on Sunday, LeBron is currently second in the NBA in scoring (29.7 ppg), behind Joel Embiid (29.8 ppg). In his 19th season, this is LeBron’s highest scoring average in over a decade and he is on pace for his 18th straight season of averaging at least 25 points – no other player has more than 11 such seasons. The fact that’s he’s in contention for his second scoring title this late into his career is simply unheard of.

Take a look at this list of players that have averaged 10 points or more in their 19th season or later. 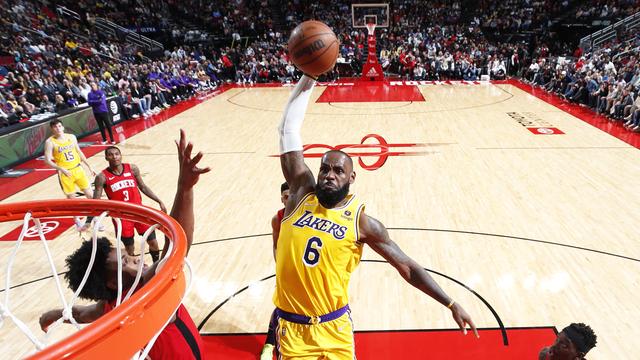 LeBron James notched his 10,000th career-rebound on Jan. 19 against the Pacers.

LeBron reached 10,000 career rebounds on Jan. 19, 2022 and currently sits in 39th place in the all-time category. While he’s in the top tier on the scoring milestone ladder, when it comes to rebounding, he lands in the middle of this list of league’s greatest glass cleaners.

Being a perimeter-based player makes it much more difficult to rack up the number of rebounds as some of the game’s all-time greats. LeBron ranks 16th all-time among non-centers and there are only nine players in league history with more rebounds that are shorter than LeBron at 6-foot-9.

Now that we have examined two categories, we can now look at some more combination stats.

Already a member of the 30,000-point club and 10,000-rebound club, LeBron just became the seventh player ever added to the 10,000-assist club – a who’s who of the game’s greatest playmakers.

Back in October, Paul became the first member of the 20,000-point, 10,000-assist club and just got some company on Sunday night as he remains sidelined for the Suns with a broken thumb; both Paul and LeBron share the instinct of when it’s time to create for teammates and when it’s time to call their own number to get a bucket.

Where LeBron separates from Paul is the fact that LeBron is one of only seven players in league history to have won both a scoring title (2007-08, 30.0 ppg) and an assist title (2019-20, 10.2 apg) in their career. LeBron joins Wilt Chamberlain, Oscar Robertson, Jerry West, Nate Archibald, Russell Westbrook and James Harden as the only players to accomplish that feat.

Let’s revisit the stats combinations we started in the rebounds section and add assists into the mix:

While LeBron became the first to hit the 30K-10K-10K milestone on Sunday, we have to keep in mind that he’s still not done. He may be 37 years old and in his 19th season, but he is still putting up incredible numbers – including his recent 56-point outburst, which not only marked his highest-scoring game in four seasons as a Laker, but matched the third-highest scoring game of his career, as well as his 50-point night against Washington six days later.

Following Sunday’s game against Phoenix, LeBron has season averages of 29.7 ppg, 8.1 rpg and 6.3 apg over 49 games played. The Lakers have 15 games remaining in the regular season and all are of great significance as Los Angeles finds itself in the play-in field at No. 9 in the Western Conference.

One major move that LeBron should make over the final month of the regular season is passing Karl Malone for second place on the all-time scoring list. Based on LeBron’s current scoring average, he would need just four games to pass Malone, which would leave only Kareem ahead of LeBron in career points in league history. That pursuit will have to continue next season as LeBron needs more than 1,500 more points to catch the Captain.

LeBron is on track to pass Zach Randolph on the all-time rebounds list this season and can make some more significant gains on the leaderboard next season.

While LeBron reached 10,000 career assists this season, he will need another to make any further moves up the leaderboard. However, he has three legends in his sights that he should catch next season, assuming good health. LeBron is already the only player ranked in the top 10 in both scoring and assists – next season he’ll likely be top five in both categories.

LeBron ranks fifth on the all-time triple-double list and needs four more to pass Jason Kidd for fourth place behind Magic, Oscar and Westbrook. LeBron currently has five triple-doubles this season in 49 games played and has finished with five or more triple-doubles in each of the past six seasons. If that trend continues next season, expect LeBron to pass Kidd.

Prev: No. 7 Michigan State vs. No. 10 Davidson preview for March Madness first-round matchup