An eleven-run first inning was all the offense Tennessee Tech (11-3) would need, although it would tack on multiple runs in the fourth, sixth and ninth against Southeastern (7-9) relievers.

SLU broke up the no-hit bid by Golden Eagle starting pitcher Connor Adams in the fifth on a single to left field by Christian Garcia.

The Lions broke up the shutout an inning later.

Reliever Jackson Berry walked the first batter he faced, Rhett Rosevear, to open up the inning. Bryce Grizzaffi hit a fly ball to center field that was misplayed for an error, putting a pair of runners in scoring position. Rosevear scored one batter later on Evan Keller’s RBI groundout.

Garcia picked up a pair of hits in the game, finishing the day 2-for-3 at the plate. 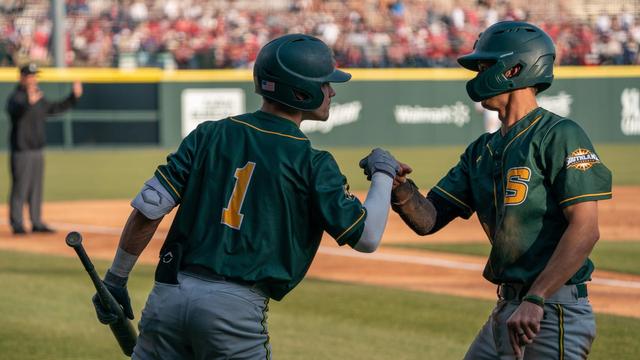 UP NEXTSoutheastern hosts No. 2-ranked Ole Miss in a non-conference contest at 6 p.m. Tuesday at Pat Kenelly Diamond at Alumni Field. SLU faces the Rebels for the first time since the 2014 season when the two schools played a pair of midweek games in Hammond. Ole Miss leads the all-time series, 17-6, although the Lions have won four of the nine games played in Hammond.

RADIO SHOWThe next episode of Inside Southeastern Baseball with Matt Riser, presented by Pour House Pizza and Beer Garden, is slated for Monday at 12 p.m. from the restaurant in downtown Hammond. Fans can listen to every show online at www.LionSports.net/ListenLive and via the Lions Gameday Experience, MyTuner Radio or Mixlr apps. The MyTuner Radio app is compatible with the Apple CarPlay software available in most newer automobiles.

General admission tickets are $9 for adults and $6 for youth (ages 3-12). Southeastern students, with a university ID, and children under age 2 are admitted free. Gameday parking is $5 per day for standard vehicles and $25 for RVs.

Tickets can be purchased online at www.LionSports.net/Tickets or by contacting the Southeastern Athletics Ticket Office at (985) 549-5466. Office hours are 9 a.m. to 4 p.m. Monday-Thursday and 8 a.m. to 12 p.m. on Fridays. The ticket booth at Pat Kenelly Diamond at Alumni Field opens exactly one hour prior to the scheduled first pitch.

Southeastern uses mobile ticketing as the primary method for distributing tickets purchased online. Tickets will be available via text message or email in a PDF format for fans to download on their phone or print at home. Tickets can also be downloaded to Apple Wallet.

CLEAR BAG POLICYSoutheastern Athletics enforces a clear bag policy for all ticketed events. The policy mirrors safety precautions required for entrance to professional and collegiate sporting venues throughout the country. For more information on the clear bag policy, visit www.LionSports.net/Clear.

LIONS GAMEDAY EXPERIENCE APPThe Lions Gameday Experience app puts audio, stats, video, social media and more in the hands of fans. Those in attendance can also check in to earn reward points redeemable for Southeastern-related prizes. Available for both Android and iOS devices, it can be downloaded from the App Store and Google Play or by following the link www.LionSports.net/App.

All membership fees and donations to both the Diamond Club and S Club (baseball) are available for the exclusive use of the Southeastern baseball program. Membership information is available by contacting the Lion Athletics Association at laa@southeastern.edu or (985) 549-5091 or visiting www.LionUp.com.

Prev: Parents of missing Southampton woman Sarm Heslop fly to Caribbean for answers one year on