The parents of a woman from Southampton who went missing from a catamaran in the US Virgin Islands one year ago have flown to the Caribbean in the hope of finding answers.

Sarm Heslop, 41, disappeared from the catamaran Siren Song, owned and operated by her American boyfriend Ryan Bane, while off the coast of St John in the early hours of March 8 2021.

The boat has never been searched and Mr Bane has not been questioned by police.

Her parents, Peter Heslop and Brenda Street, hope that by being on the island they might be able to piece together their daughter's last known movements.

She was known to have gone for dinner in St John with Mr Bane on March 7 and he reported her missing to police at 2.30am the following day, but a call to the coastguard took a further nine hours.

A police search failed to find her. Sarm's possessions, including her bank cards and mobile phone, were found onboard.

A group of Sarm's closest friends say they feel "abandoned" by the UK and US Virgin Island authorities.

Vicki Mogridge-Percy, a close friend of Sarm, said: "A year on, we want to say that we're no further on, it's an absolute nightmare, it's not going anywhere.

"It's still classified as a missing persons case, she shouldn't be a missing person, she's not disappeared of her own fruition and a year on the Constitution of the United States means that he's [Mr Bane] never been interviewed, he is a person of interest and that boat has never been searched and that is a crime scene.

"This is not moving anywhere and we have no idea how that's ever going to change."

Kate Vernalls, also a close friend of Sarm, said: "We haven't seen any evidence of any searching done by Ryan.

"She lived on the boat, they were in a relationship. We would have liked to have seen evidence of him out handing out missing person flyers, going out helping with the dives, helping the coastguard, but we haven't seen any of that.

"It's incredibly frustrating to be here in the UK, where she is from, and having to continue our searches but with the US legal system and the way it is, we are at a stale point.

"We're at a point where we can't progress any further without the assistance of the US legal system and at the moment our hands are tied." 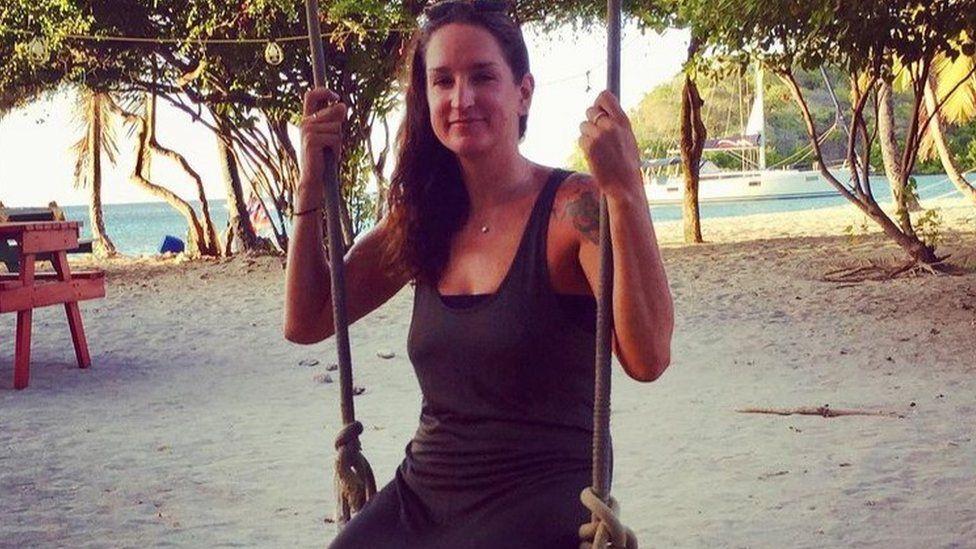 Andrew Baldwin, another friend of Sarm, said: "We have to try and keep the interest up and the pressure which is really difficult.

"Something happened, and we want to know what happened.

"That's why we're making a fresh appeal for the investigation to carry on and for those questions to be answered.

"Anyone that knows her will tell you what a great friend she is and how desperate we are to have her back and to find out what happened to her and find answers for her."

In a statement, the group #FindSarm said: "We are a whole year on from learning of her disappearance and yet we still only have the same handful of facts about what happened that night.

"We know that they dined on the island and returned to the boat at 10pm. We know that Ryan Bane called the local police at 2.30am and we know that he later called the coastguard at 11.46am.

"We also know that a full forensic search of the catamaran Siren Song, of which Sarm was a resident has never been carried out.

"We know that Ryan Bane has never been interviewed by the US Virgin Islands PD and we know that there has been no sign of Sarm since she was in that restaurant in St John.

"We have no evidence that Mr Bane participated in the searches for Sarm, nor has he been called in for further questioning since he pled the Fifth Amendment.

"Ryan Bane has never come forward to offer the Virgin Islands Police Department access to the Siren Song for a forensic search of the last place she was seen.

"We understand that the application for a search warrant has been declined three times on the grounds of lack of evidence that this is nothing less than a missing person case."

Hampshire Police announced in April last year that they were supporting the Virgin Islands Police Department in their investigation into Ms Heslop’s disappearance.

In a statement Detective Inspector Matt Gillooly, of Hampshire Police, said: "Sarm's disappearance is understandably troubling and, as such, Hampshire Constabulary has been providing operational support in the UK to assist the US Virgin Islands Police Department investigation.

"We are working with the Government's Foreign, Commonwealth, & Development Office to support Sarm Heslop's family in the UK.

"Her family is being supported by the FCDO when they travel to the US Virgin Islands and this is entirely appropriate.

"Hampshire Constabulary cannot comment further on another force's investigation, but will always be available to assist the US Virgin Islands Police Department as and when requested."

A reward of $10,000 has been offered for anyone with information that leads to a significant breakthrough in the case.

Anyone with information regarding the whereabouts of Sarm is urged to call Crime Stoppers USVI at (800) 222-TIPS.

Prev: 50 Best cheap portable gaming consoles in 2021: According to Experts.