Rosencrans said he has been working with council members since 2016 to advance and complete the $23.16 million project.

The project’s addition of emergency communication towers and new microwave dishes and antennas will address spotty or nonexistent radio coverage in parts of the 980-square mile, largely mountainous county, he said.

It is designed to provide 95% emergency radio coverage over the entire county, including remote areas and the ground floors of structures in both urban and suburban communities, he said.

The system will provide a minimum delivered audio quality of 3.4, which is the industry standard, Rosencrans said.

According to Rosencrans, this means busy first responders won’t have to repeat messages during radio transmissions and urgently ask dispatchers, “Can you hear me now?”

Motorola Solutions Inc. was awarded the radio system contract. Other companies were retained through a public procurement process to construct and upgrade towers and furnish and install the licensed microwave system.

Emergency responders will swap analog radios for digital ones to exchange messages — including thousands of mobile and portable radios the county purchased for police, fire and emergency medical service agencies at a cost of more than $8 million, officials have said.

The system will allow two simultaneous conversations on one channel and increase the capacity, in part by making use of idle channels.

“So basically, we’re taking patchwork quilts of radio channels now and broadcasting across 19 sites countywide when we go live on this new system,” he told council.

Public school districts also will receive mobile radios with a panic button as part of the county upgrade, allowing school officials to instantly send a message if there is an emergency situation, he said.

Replacement of outdated consoles 911 dispatchers use to speak with responders in the field also is part of the project.

All equipment and components will be tagged and tracked through an asset management system, he added.

As part of the project, the county added a new emergency communication tower off Harris Pond Road in Ross Township to increase emergency radio coverage in the Back Mountain. The state’s Fish and Boat Commission agreed to a no-cost lease for the county’s use of its site.

Four existing towers had to be replaced because the old ones were not structurally equipped to handle the new equipment in compliance with wind and ice-load standards, he said.

The county is changing from 2-foot microwave dishes to 6-foot ones, Rosencrans said. The replacement towers are in Freeland, Mountain Top, the Campbell’s Ledge area of Duryea and at the Emergency Management Agency in Wilkes-Barre.

Other tower sites required additional preparation work, including electrical remediation such as grounding, he said. 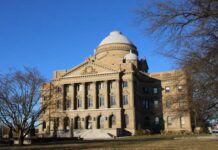 There are 19 tower sites in total.

The project is anticipated to cost $23.16 million, Rosencrans said.

Council had allocated $1 million toward the project and then voted to borrow another $19.7 million to help fund it in October 2019, generating praise from fire chiefs and other emergency responders attending meetings around that time to express support for the project.

Rosencrans said 911 funding has covered the difference, which means he did not have to seek additional funds or borrowing from the county to cover base project costs.

The county’s council-approved contract with Motorola also locked in additional annual maintenance costs over 20 years, but officials have said those will be covered through the yearly general fund budget process.

During last week’s presentation, county Councilman Kevin Lescavage, who took office in January, said he wants to organize a committee to review the project. He added that he is “100% behind 911.”

“It’s a big expense for the county, and I just want to make sure we’re getting everything we paid for,” Lescavage said.

“I welcome it,” Rosencrans said of the review.

Councilwoman LeeAnn McDermott asked Rosencrans about his pending request for $3 million of the county’s remaining $99.6 million in federal American Rescue Plan funding to expand the project.

Rosencrans said he is requesting $1.6 million for a feature that would allow 911 center personnel to remotely connect to the more than 4,000 emergency radios in the field so they don’t have to physically hold them to complete software, firmware and other updates as part of the initial programming and ongoing maintenance. Two 911 staffers — one part-time — handle the programming, and the hands-free feature will save time, he said.

The other American Rescue request is for $1.4 million to add a feature that will transmit the GPS coordinates of responders, providing their current location when they transmit or communicate on the new system. Because it will improve responder safety, location identification was one of the most requested items when 911 held training and discussion sessions with outside agencies in January, he said.

The features were cut from the original project contract to stay within budget, he said.

After the conversion, the system will be encrypting police channels for officer safety at the request of the Luzerne County Chiefs of Police Association, although fire and EMS channels likely won’t be encrypted, officials have said.

Rosencrans’ presentation is posted with council’s March 8 meeting agenda at luzernecounty.org. Details about the project are posted at www.LuzerneP25.org.