The following review was originally published by TechRadar UK. It has been modified to reflect the features and pricing of this device in the Middle East.

Nokia may not be the market leader it was in the pre-smartphone era, but the present-day iteration of the firm – which operates in the mobile space under licensee HMD Global, a company formed by many former Nokia executives – has been chipping away with its range of Android-based handsets.

The Nokia 7 Plus – released alongside the 2018 version of the Nokia 6 and the flagship Nokia 8 Sirocco – effectively serves as the brand's mid-range challenger for this year, offering decent specs, 'pure' Android and almost the same basic camera setup as the Nokia 8 Sirocco.

All of this is built around an impressive 6-inch full HD+ display with an 18:9 widescreen aspect ratio, making it a viable alternative to the likes of the OnePlus 5T.

If you're a fan of Nokia's recent efforts then you'll be pleased to learn that the 7 Plus conforms to the design language laid down by handsets like the standard Nokia 7 and Nokia 8; we're talking rounded edges, rear-mounted fingerprint scanners and the bare minimum of physical buttons. 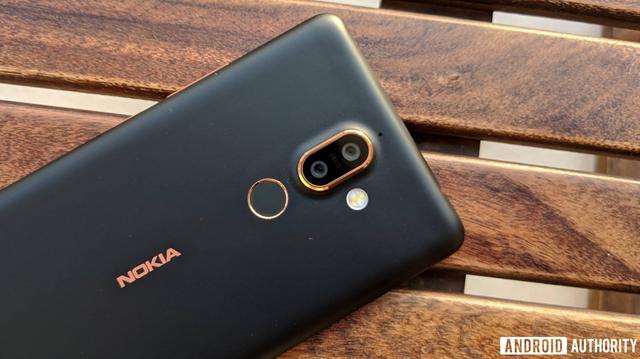 The Nokia 7 Plus’ sturdy frame is machined from a single block of 6000 series aluminium, which gives it an incredibly robust feel.

The copper-coloured frame contrasts neatly with the black bodywork elsewhere, although it looks just as good on the white model. The rear of the phone is coated in a ceramic covering which is nice and grippy but picks up greasy fingerprints quite easily.

There's a copper accent around the edges of the display, and copper can also be found on the camera bump and fingerprint scanner. There's also a Nokia logo on the back of the device, printed in – you guessed it – copper.

The volume and power buttons are located on the right-hand side of the phone, while the SIM card tray – which can take two SIM cards or one SIM card and a microSD card of up to 256GB in capacity – is on the left-hand edge.

On the top you'll find a 3.5mm headphone socket, which will come as welcome news to those audiophiles who stubbornly refuse to ditch their wired cans for a pair of Bluetooth ones. On the bottom edge there's the single speaker, USB Type-C port and microphone.

As you might expect, the 18:9 aspect ratio display takes up the majority of the space on the front of the Nokia 7 Plus. It's not quite bezel-free – there are small bezels at the top and bottom of the screen – but it feels nice and roomy all the same and provides an ideal platform for mobile movie watching.

The resolution of 1080 x 2160 is relatively sharp by mid-range standards and colours look realistic and convincing, but the IPS LCD panel lacks the impact of an AMOLED one and is quite hard to use in direct sunlight – we ventured outdoors with the phone and found ourselves struggling to read text on the display.

The screen is coated with Corning Gorilla Glass 3, which protects against scratches and marks. It's worth noting that some 2018 phones – such as the Samsung Galaxy S9 – have the swanky new Gorilla Glass 5, so the 7 Plus is a little behind the curve here.

Next: Here are some common Moto G5S Plus problems and how to fix them