Xiaomi/Pocosent us the new Poco X4 Pro about 10 days ago in anticipation of the launch at MWC 2022. I have been using this device alongside a few other Xiaomi/Poco devices. By the time this review goes live you will have seen our review of the Redmi Note 11 Pro 5G smartphone.

Black cover yellow box, yellow insert, and a black color smartphone. So far everything looks classic Poco. Inside the insert are a beefier TPU clear case, SIM tool, and paperwork. In terms of charging accessories, we get a USB-C cable and a 67W fast charging power brick. Yes, the phone still has a factory-applied film screen protector.

The Poco X3 Pro kept the design language of the original Pocophone F1. But it’s been a few years since the international bestseller Pocophone F1 launch. The curved design looks a bit outdated in 2022.

So now the Poco X4 Pro raids the corporate design/parts bin and adopts the newer more squarish design. Sure there are a couple of design flourishes that are unique to Poco. But the Poco X4 Pro is basically a Redmi Note 11 Pro 5G with a glossy back that gives off searchlight vibes from the 20th Century Fox studio intro.

The front, side rails, buttons, and SIM tray slot are all identical. So are the cameras in the front and rear. Ditto for the 6.67″ AMOLED screen with a 120Hz refresh rate.

There is a new quad-camera module, and the rear camera module layout looks similar to the Poco M4 Pro series. The branding and backplate are also more in line with Poco’s overall design theme for 2022. Combined together the hardware design language changes are welcome and give the Poco X4 Pro a clean look.

But Poco did make one bad choice at least on the review black color device. The glossy backplate is an absolute fingerprint smudge fest compared to the matte Phantom Black finish on the Poco X3 Pro last year. I personally would have preferred the matte black finish of the Redmi Note 11 Pro 5G. I mean the entire device is a clone why couldn’t Poco have just changed the camera module layout. 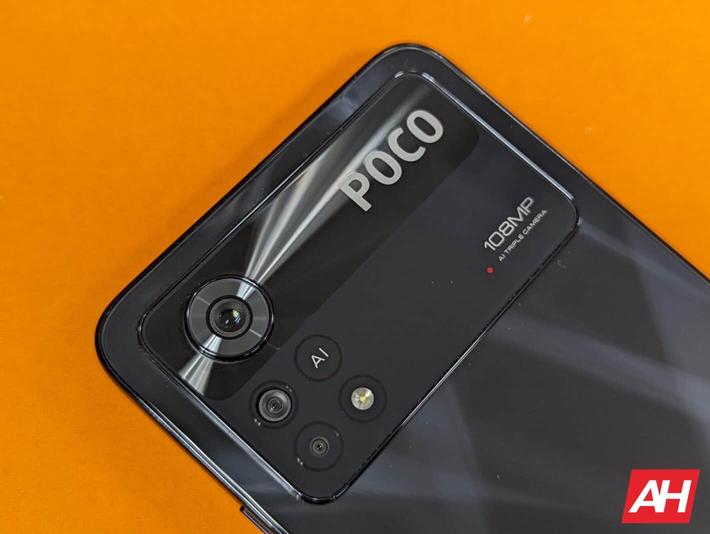 Display gets an upgrade to AMOLED with 120Hz refresh rate

While the screen size remains the same this year Poco has finally gone AMOLED across the entire lineup. The end result is a stellar 1200 nits peak brightness 120Hz refresh rate 6.67″ AMOLED display.

You will love the display indoors or outdoors because it gets plenty bright and in dark settings gets quite dim. The only minor downgrade is the display protection is now Gorilla Glass 5 instead of 6 in the previous version.

Performance takes a hit but we get 5G connectivity

The biggest selling point of the Poco X3 Pro was that it had a Snapdragon 8XX series processor. Yes, the processor was a bit old for 2021 but still packed a ton of processing horsepower. There was a slight hope that Poco might go for the Snapdragon 870 this time around to ensure the Poco X4 Pro could retain the best budget gaming phone crown. Alas, that is not happening.

Poco X4 Pro gets the new Snapdragon 695 processor which is a bit slower than the Snapdragon 860. Geekbench 5 scores for multi-core drop from 2575 to around 2084. That is roughly a 20% hit just from a benchmark score perspective.

During my review period though there were no major hiccups of slowdowns for regular browsing, streaming, or scrolling. However, you may find that you need to play games on medium settings now since the review unit has 6GB RAM paired with the Snapdragon 695. So from a pure gaming perspective, this device is a downgrade but for someone coming from a much older device, the day-to-day device performance should not be a deal-breaker.

While the battery capacity goes down a bit from 5160 mAh to 5000 mAh, overall battery life is unchanged thanks to a power-efficient processor and the AMOLED display. With 67W fast charging support, you can top up the new Poco X4 Pro to 70% in just 22 minutes! Basically, you should be able to squeeze out a day’s use with about 70% charge unless you decide to play graphics-intensive games for 4 hours straight.

Of course, there is a slight trade-off for the power efficiency with 5G connectivity but for most users this device will last through an entire day without any issues.

Software, audio, and connectivity are great on the Poco X4 Pro

As the old saying goes, “if it ain’t broke, don’t fix it”. Poco X4 Pro still has absolutely stellar dual audio speakers and a headphone jack. Poco did not mess with the Hi-Res audio certification either to cut corners.

In terms of connectivity all the regular features – Screen Cast, Screen Share, Nearby Share, IR blaster, NFC, Bluetooth are on board. But the biggest change is now 5G connectivity. While I got the 5G signal my download speeds were poor and comparable to my daily driver which is a Pixel 6.

In terms of software, the device is running MIUI 13.0.3 Global with the February 2022 security patch. There is the familiar Poco launcher with round icons. Overall software isn’t changed much from last year’s version. I am hoping Xiaomi/Poco releases the Android 12 based MIUI 13 software for this device soon.

Main camera gets a big upgrade on the Poco X4 Pro

Last year, the Poco X3 Pro packed on the processing power but kept costs low by using older camera hardware. This year Poco bumps the main camera to a 108MP sensor. The ultrawide and macro camera keep the same resolution but get hardware identical to that on the Redmi Note 11 Pro 5G. Be sure to check out that review and the camera samples.

Selfie camera is also a carryover from the new Note 11 series and as a result, is a slight downgrade compared to the previous device. Overall selfie camera results are okay but it is high time for Xiaomi/Poco to step up their selfie camera game.

Since the processor gets a downgrade from 8XX to 695 the ability to record video in 4K is no longer available. Practically speaking though the 1080p video with Dolby Atmos support is quite decent from the main camera on the rear. So overall the cameras are a wash in terms of an upgrade.

The Poco X3 Pro was extremely easy to recommend in 2021. While the newer Poco X4 Pro has better hardware design language, a stellar AMOLED high refresh rate display, and 5G connectivity its price also jumps by $100.

So this year the Poco X4 Pro makes some interesting compromises – not every change is a clear-cut upgrade. My recommendation is that if you can snag one during the early bird pricing it is a great deal. But after the launch window ends, take a closer look at the Redmi Note 11 Pro 5G because it is the same phone with more RAM and a fingerprint-resistant back for roughly the same price.