The Redmi Note 11 Pro+ 5G has a glossy glass design with unique patterns in its Mirage Blue variant whereas you see a frosted glass on the other two variants – Phantom White and Stealth Black. It follows the design traits from its Xiaomi branded siblings, the Xiaomi 11i 5G, Redmi calls it an EVOL design.

The backside has a quad-camera setup just at the top left side and you will see Redmi branding at the bottom. It comes with flattened sides and rounded corners, the overall design is neat and easy to hold in the hands. The phone has a water-resistant design IP53 certified.

The Redmi Note 11S has a 6.67-inch AMOLED display with a Full HD+ resolution (2400 x 1080 pixels), a 120 Hz refresh rate, and a 360 Hz touch sampling rate. The peak brightness of the display is 1,200 nits peak brightness and 4,500,000:1 Contrast ratio with DCI-P3 wide color gamut. Despite having an AMOLED display, the fingerprint scanner is mounted on the power key on the right.

The right side has volume buttons and a power button that doubles as a fingerprint scanner. The bottom side has a triple-slot SIM tray with two SIM slots with support for 5G, and one dedicated microSD card slot.

The bottom side also offers a USB Type-C port for fast charging, a microphone, and a stereo loudspeaker (one at the top). The second microphone is at the top side alongside a 3.5 mm port and an IR blaster.

Like its siblings, the Redmi Note 11 Pro+ 5G also runs on the older Android 11, it offers MIUI 13.0.2 user interface based on the Android 11. The security patch available on the phone is 2022/02/01. It’s 2022 and Android 11 out-of-the-box? We thought Xiaomi India would bring the Android 12 based MIUI on its latest smartphones.

Xiaomi India is still behind in terms of Android software updates, we can see a number of smartphones moved to the Android 12 operating system, manufacturers such as realme, OPPO, OnePlus, and vivo already offers Android 12 in their latest phones. Nevertheless, we believe it’s not too long, Xiaomi India will bring the latest Android update in the coming months, expect the smartphone to receive the updates soon.

Even with Android 11, the Redmi Note 11 Pro+ 5G employs a newer version MIUI 13 with all the latest features in it, you can still enjoy many useful MIUI 13 features. About the MIUI 13 interface, you will see a bunch of new features which include upgrades in design, better background efficiency, faster processing, as well as longer battery life. Some features you see are added live wallpapers, themes, a new sidebar, and more.

The user interface runs smoothly, the 120 Hz display delivers its best to give you a smoother UI experience and UI responsiveness. About the bloatware, you won’t find any major bloatware on the phone, a few apps come pre-installed that can be removed if not required. Apps like Netflix, Prime Video, Amazon, Facebook, LinkedIn, Spotify, and Zili are installed alongwith apps by Xiaomi India. 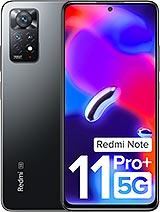 The Redmi Note 11 Pro+ 5G equips a 6nm Qualcomm Snapdragon 695 which is a mid-range octa-core SoC found on a few recently launched smartphones. Rivals like realme 9 Pro 5G and vivo T1 offer the same processor and are priced under ₹20,000.

The CPU is slightly faster than the Snapdragon 765G and superior to the Snapdragon 720G found. The performance fits the price bracket and is suitable for everyday use, also good for gaming and multitasking. In terms of graphics, you will find an Adreno 619 GPU for gaming, and graphics-intensive tasks. For gamers, the Adreno 619 can run several games smoothly on default graphics settings.

The Qualcomm Snapdragon 695 barely competes with the MediaTek Dimensity 920 (found on the realme 9 Pro+ 5G), if you are a performance user, you might want to switch to the latter for a little more price while the Snapdragon 695 is still good as a midranger.

Similar to realme and OPPO RAM expansion technology, the Redmi Note 11 Pro+ 5G offers a RAM extension of up to 3 GB extra on top of 8 GB. That is, you get a total of 11 GB RAM on the phone, the system automatically extends the RAM by 3 GB.

The triple setup includes a 108 MP primary camera utilizing the Samsung’s HM2 sensor (also found on the Redmi Note 11S), an 8 MP ultra-wide-angle, and a 2 MP macro, dedicated no telephoto or depth camera is available. The front offers a 16 MP selfie camera.

We took some shots to see how the camera performs, you can see the camera samples below that we’ve attached. The image quality appears to be identical to the Redmi Note 11S, the daylight photography is quite good and is detailed, the photos are bright and clear. Selfies turn out to be decent from its 16 MP camera.

Moving to the video capabilities, you don’t get 4K video recording and even 60 fps recording for 1080 videos, it can record up to 1080p at 30 fps. It can be a letdown if you want to record at higher resolution and increased frame rates. It still has slow-motion video support but no super slow-motion 480 or 960 fps. Recording wide-angle video is possible.

The Redmi Note 11 Pro+ 5G equips a 120 Hz AMOLED display, stereo speakers, a worthy 108 MP camera, and a Snapdragon 695 processor that performs well. Gaming won’t be a letdown on this phone. Besides, the Redmi Note 11 Pro+ 5G has a whopping 67W fast charging support that charges about 50% in just 15 minutes, giving you ample battery life for the day. It also comes in a Mirage Blue color with unique patterns on its glass design while the other two variants come in a frosted glass design, all three supporting the IP53 water-resistant body.

The smartphone has a few shortcomings, no Android 12 out-of-the-box, no option for 4K videos (and 1080p in 60 fps). If you are looking for such traits in this budget, you might want to consider a different option. Overall, the Redmi Note 11 Pro+ 5G, despite having a few shortcomings, is still a great option if you have a budget over ₹20,000.