Samsung Galaxy S22 series has been officially released on February 9 and is soon expected to be in Nepal.

The much-awaited flagship series from Samsung was officially unveiled at Samsung’s recent Galaxy Unpacked event. The launch of the series is a month late than last year’s S21 series.

In this article, we will provide you with the details of the Samsung Galaxy S22 and Galaxy S22+. Let’s get into the specifications of the phones.

Samsung Galaxy S22 and S22+ are based on iconic S series design. Both phones have a similar build and shares similar specifications and features as well. Both Galaxy S22 and S22+ have a glass back and front with an aluminium frame. Both glasses on the back and front are protected by Gorilla Glass Victus+, the toughest Gorilla glass yet. Samsung Galaxy S22 is 7.6mm thick and weighs around 167 grams whereas S22+ is 7.6mm thick and is slightly heavier at 195 grams. The phones also have IP68 dust/water resistant certification (up to 1.5m for 30 minutes).

Samsung Galaxy S22 features a 6.1-inch Dynamic AMOLED 2X HDR 10+ display whereas the S22+ features a bigger 6.6-inch display sharing a similar display specification. S22+ can reach a peak brightness of up to 1750 nits while S22 can reach up to 1300 nits. This can be pretty helpful for daylight use. The HDR10+ display of the phones has an adaptive refresh rate of up to 120Hz. The display can dynamically change the refresh rate from 120Hz to as low as 1Hz.

Cameras are always one of the major focuses on a flagship phone. Everyone expects a crisp and sharp image with natural colours and Samsung claims that the new Samsung Galaxy S22 series have set camera experience to the whole next level. Both S22 and S22+ shares similar camera specifications. 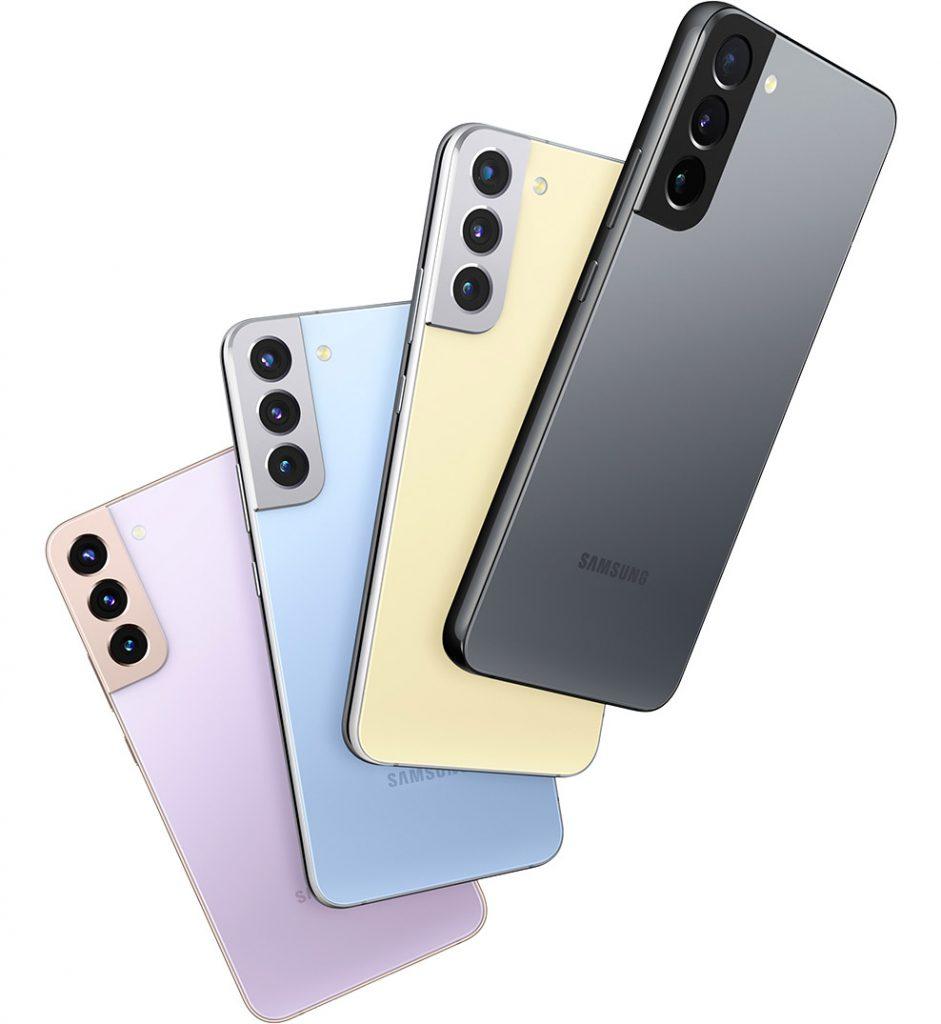 Both phones feature a triple camera setup on the back and a single selfie shooter on the front. The 50MP camera on the back is housed together with a 10MP telephoto lens with PDAF, OIS and 3x zoom and a 12MP, 120 degrees ultrawide sensor. On the front, there is a 10MP selfie camera.

The main cameras on Samsung Galaxy S22 series can record videos in 8K resolution whereas the front camera can record videos in 4K resolution up to 60fps. There are lots of camera features on the phone so that the user can take brilliant photos without any hassle. There is a dual video call mode. The Super HDR technology allows the phone to take photos with a higher dynamic range, less noise and clearer details.

Similarly, Night photography has also been improved a lot thanks to a 23% larger sensor than the previous generation of the Galaxy S series. This helps the users take good photos even during the low lights. The portraits should also look better and more natural due to the integration of the AI stereo depth map.

Similarly, the videos from Samsung Galaxy S22 series are steadier than any other Samsung phone. The optical image stabilisation (OIS) and video digital image stabilisation (VDIS) technology on the camera allow it to capture steady videos even when the user is moving. The cameras also record stereo sounds while recording videos and has a zoom-in mic as well that focus on the direction of interest, using a combination of three built-in mics while video recording.

Samsung Galaxy S22 series runs on the latest Android 12 with One UI 4.1 on top. The new S series is powered by either Qualcomm Snapdragon 8 Gen 1 (4nm) or Exynos 2200 (4nm) chipset. These are the two best chipsets available for an Android phone in the market at the moment.The graphics on the phone are handled by Xclipse 920 in Exynos and Adreno 730 in the Snapdragon version.

However, Nepal is more likely to get the Snapdragon variant. The new Samsung flagship phones are set to receive four years of Android updates and an additional year of security patches.

For Audio, the phones have surround sound with Dolby Atmos technology. There is no 3.5mm headphone jack on the phone.

Also, check the price of Samsung phones in Nepal.

Next: Unihertz Titan Pocket Review: A Niche Phone For Those Missing The BlackBerry