Home > iPhone > Smartphones are taboo for some girls in India. That's bad news for their future

A teen girl with a smart phone in Kolkata, India, photographed in April 2020 during the government-imposed lockdown. Schools pivoted to virtual learning, which shut out many students — especially girls in low-income communities — without access to mobile devices. Debajyoti Chakraborty/NurPhoto via Getty Imageshide caption

A teen girl with a smart phone in Kolkata, India, photographed in April 2020 during the government-imposed lockdown. Schools pivoted to virtual learning, which shut out many students — especially girls in low-income communities — without access to mobile devices.

Pinky finally got her phone.

And it helped her graduate from high school.

Pinky is now 21. She was 19 and in grade 11 when India closed schools as part of a nationwide lockdown to prevent the spread of COVID in March 2020.

Without a smartphone, Pinky, who lives in Beer village in the north Indian state of Rajasthan, could not join the WhatsApp group her teachers had created. She couldn't see the study material – which included everything from math problems to additional information based on their lessons. And she couldn't download homework.

"School closed and so did my access to education," she says.

It wasn't that a phone was too expensive. Her 24-year-old brother, who works in a factory, has one. A secondhand phone costs around $13. And 2GB of data, which can last a month, is $2.50. That's still within reason for Pinky's family. Her father is a daily wage laborer who earns $4 to $6 a day.

This Teen Is Being Pushed To Wed Because Of The Pandemic. Her School Helps Her Resist

Pinky says her parents believed it was taboo for girls to use phones. Girls could meet guys online, run away with them or be corrupted by online influences. (In her deeply conservative community, girls do not speak out about their personal lives, which is why she asked to be referred to by her first name only.)

Many families from rural parts of India share this attitude, says Shabnam Aziz, head of gender equity and inclusion at Educate Girls, a girls' education nonprofit that works in over 20,000 villages in India.

The same attitude does not apply to boys. A boy with a smartphone is considered to be progressive and smart, she says.

The ramifications of this gender divide predate the pandemic. According to a 2021 UNICEF report, girls age 15 to 19 years — in countries with data — were less likely to own a mobile phone than boys their age and less likely than boys to have used the internet in the past 12 months. That's especially the case in South Asia, including India. And this situation has made it particularly tough for girls to transition to online schooling in the pandemic, say experts and activists.

Mobile phones out of reach for teen girls

Many village girls in India have to borrow a smartphone from a male family member in order to use one, says V., a 20-year-old researcher from Jaipur with the global nonprofit group Girl Effect. The organization hires young women like V. to survey girls in their community. 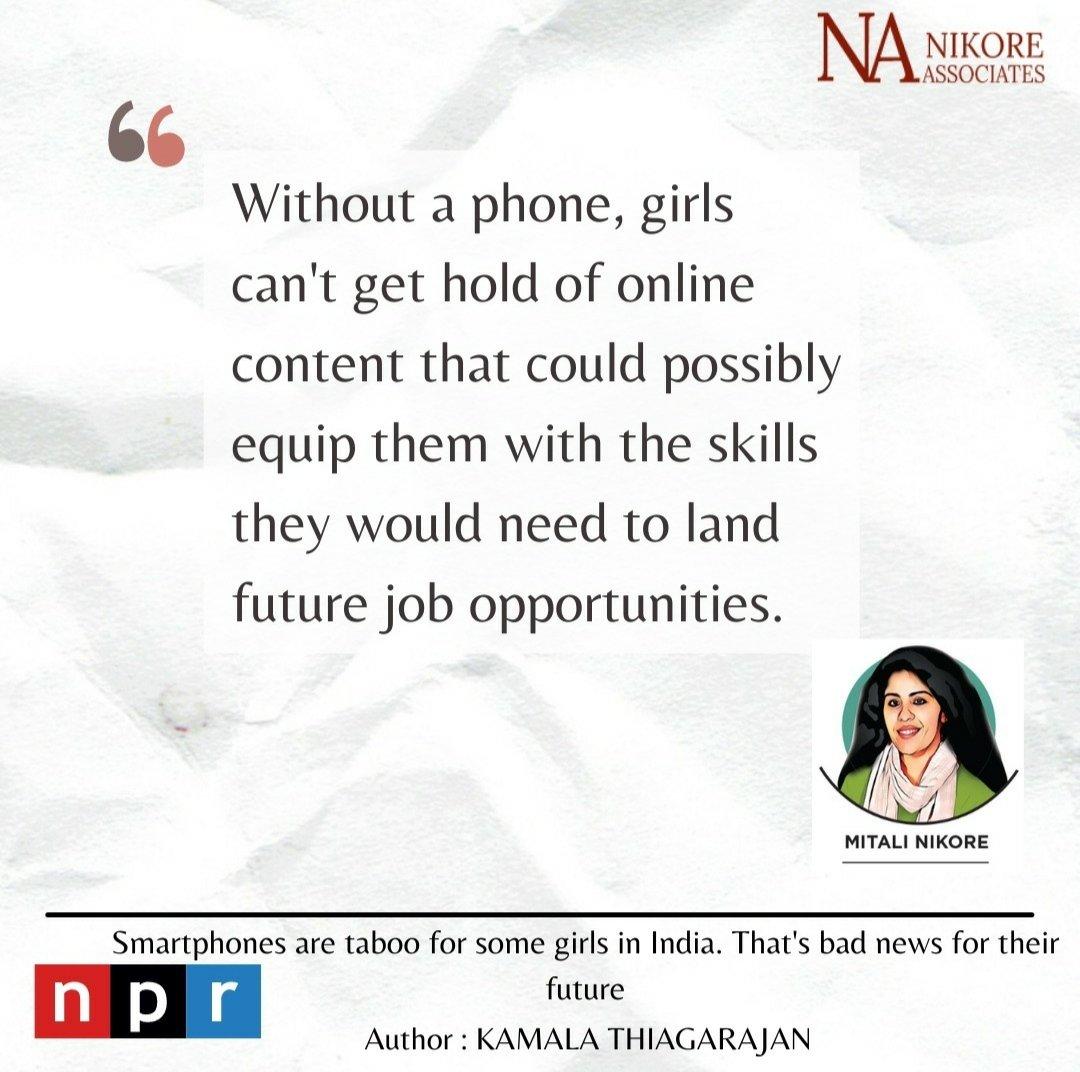 Pinky's brother, for example, would only let her borrow his phone for 10 minutes at a time.

(Since these researchers also ask sensitive questions about sexual and reproductive health, Girl Effect asked NPR not to share V.'s full name as it could compromise her safety and ability to conduct field research.)

Girls may have to figure out secret plans just to use technology, because of cultural restrictions that frown on young girls dating or meeting boys. One girl told V. that she had her own mobile phone, but her brother constantly checked it. He pried into her call history and Facebook conversations to see if she was chatting with boys, even though she wasn't allowed to touch his phone. She had to create fake IDs on Instagram and Facebook just for the sake of privacy, and would often save the numbers of the boys she knew under girl's names so her brother couldn't spot them, she said.

Whatever Happened To ... The Teen Hailed For Cycling 700 Miles With Her Injured Dad?

This lack of access to mobile phones and privacy comes at a high cost for girls – and can affect their futures, says Mitali Nikore, an economist. Her think tank Nikore Associates is studying the gender barriers girls face in using technology in 13 Indian states.

Without a phone, girls can't get hold of online content that could possibly equip them with the skills they would need to land future job opportunities. "Girls can't work in offices without being able to navigate Word or Excel. They can't become entrepreneurs if they don't know how to use online payment apps on phones. And they can't venture into digital marketing without learning how to use social media," she says.

The dire toll on girls' education

A girl being left behind in the future digital economy isn't the only concern. There's a crisis looming in the present day, too.

While schools in some Indian states have resumed in-person classes over the past couple of months, most schools have remained shut since early 2020 due to COVID lockdowns. During these closures, many schools pivoted to virtual learning.

Studies have shown that online lessons are no replacement for in-person teaching. According to a September 2021 UNICEF report, 80% of children age 14 to 18 in India reported lower levels of learning than when physically at school. The data was gathered through surveys of parents, teachers and adolescents conducted over telephone in six Indian states.

But getting phones in girls' hands is a start, says Nikore. They can prevent girls from falling further behind in school, especially in communities where schools still haven't fully reopened yet.

Girls who don't have the tools to attend online school and contact their teachers and complete assignments online as well are at the greatest risk of dropping out, says Lucina Di Meco, senior director of girls' education at Room to Read, a global education nonprofit group.

"It's our experience that while most girls want to stay in school, the odds are stacked against them because of material need as well as lack of role models and harmful social norms that often don't value girls' education," she says.

If girls have to leave school, that opens them up to other risks, adds Di Meco. "They are now more than ever vulnerable to falling prey to early enforced marriage."

The uncertainty brought about by school closures have fueled the rise of early marriages, says Nikore. Parents from low-income backgrounds think betrothal is a way to secure a girl's future if she cannot study or get a job to fend for herself.

To help girls stay in school, Room to Read has been trying to find ways to boost mobile phone use among girls. The group deploys women employees to persuade parents of adolescent girls in their communities to let their daughters use a phone. Often, that involves borrowing a phone from a friend or neighbor or having brothers or parents leave a phone at home so the girl can study.

Pinky was able to get her own mobile phone last year thanks to a similar program.

Members of the nonprofit group Educate Girls spoke to Pinky's parents on her behalf and convinced them that she really needed to use a phone to complete her studies and graduate high school.

Her parents relented but said Pinky would have to buy the phone herself. Pinky worked temporarily as a laborer on farms and harvested crops, earning $3.50 a day — and used the money to buy a secondhand Samsung mobile.

Pinky says her parents no longer disapprove of her owning a mobile phone. Their attitude changed, she says, when they saw that Pinky was making progress in her education — and helping her younger sister with her studies.

Pinky graduated from high school last year and has enrolled for a bachelor's degree at a local college.

"I feel a sense of accomplishment," she says. "I have worked and fought so hard to own this phone. Achieving this gives me confidence and hope."

Kamala Thiagarajan is a freelance journalist based in Madurai, Southern India. She reports on global health, science, and development, and her work has been published in theNew York Times, The British Medical Journal, BBC,The Guardian and other outlets. You can find her on twitter @kamal_t