Spotify announced today that it has added 11 million users in the past three months, bringing its total to 356 million users. This is a significant increase compared to the beginning of 2020, but it has slowed down compared to the explosive growth the company has seen for the rest of the year. Similarly, the number of people paying for Spotify Premium increased only slightly, with fewer than 4 million registered between January and March. As a result, there are 158 million paying customers, and 208 million use the ad-supported version.

One thing that the company has managed to fix is its churn rate, which is now flat compared to the previous quarter. It’s likely that the pandemic helped alter people’s behavior, and the company credits “higher retention offerings like Family Plan” to ensure people don’t cancel their subscriptions. Similarly, another benefit has been the increased focus on podcasting, which saw ad-supported revenue growing significantly during the period. Joe Rogan's exclusive show has performed "above expectations," while President Barack Obama and Bruce Springsteen's Born in the USA was the "second largest podcast on Spotify" through March.

This month, Spotify has been drip-feeding a number of announcements about the future of its business. That includes the limited release of “Car Thing,” a smartphone-sized unit designed to upgrade older cars with a Spotify-created voice assistant. Similarly the company has launched podcast subscriptions (with generous financial terms) and a new 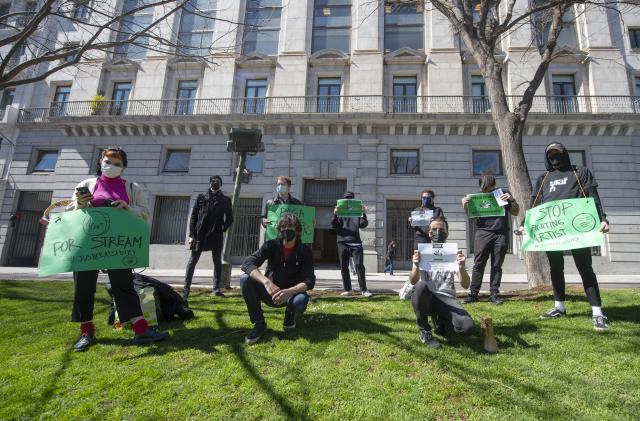 music player that works inside Facebook as part of a broader team-up between the two companies. Meanwhile, family plan users in the US and Europe have seen the cost of their plans increase by $2 / £2 per month.

And the rumors suggest that Spotify’s complaint to the European Union about Apple’s cut of App Store fees will soon lead to real action. It’s believed that the EU will issue antitrust charges against the iPhone maker for how it mandates the use of its own payment system inside the App Store. A process which Spotify, Epic, and a number of other developers, feel is unfair. This, however, all comes in the shadow of sustained criticism that the company doesn't compensate artists fairly.

Last year, a group of musicians launched the Broken Record campaign, which aimed to highlight that Spotify pays a pittance per stream. A Wall Street Journal report from earlier this month revealed that Apple Music pays artists a single cent per stream, while Spotify reportedly pays less than half of that. The disparity has only become more visible since CEO Daniel Ek has suggested he would like to buy Premier League football team Arsenal F.C. from LA Rams owner Stan Kroenke.