Students from across Toronto and the GTA protested against the invasion of Ukraine on Saturday outside the Russian Consulate.

Protesters gathered in front of the Russian Consulate on St. Clair Avenue East for what they called the Next Generation Rally. They say they want to demonstrate support from young Ukrainians in Canada and push governments to do more to help.

"A lot of us do have family back there, a lot of us have friends," said Yulya Korchyna, president of Ukrainian Students' Club at York University.

"I have friends who have gone back to fight in the war. That's really what it's about — showing support, and showing that even as far as Canada we're showing them support."

Russian forces have launched missile attacks against western cities in Ukraine. In the port city of Mariupol, Ukrainian authorities say more than 1,500 people have died and a siege of the city has left many civilians without heat, phone service or electricity. French and German leaders spoke Saturday with Russian President Vladimir Putin in a failed attempt to reach a cease-fire.

"All of us know how it feels to have our eyes glued to the news and to have our minds clouded while we try to go about our daily lives," said Danya Pankiw, the president of the Ukrainian Canadian Students' Union. 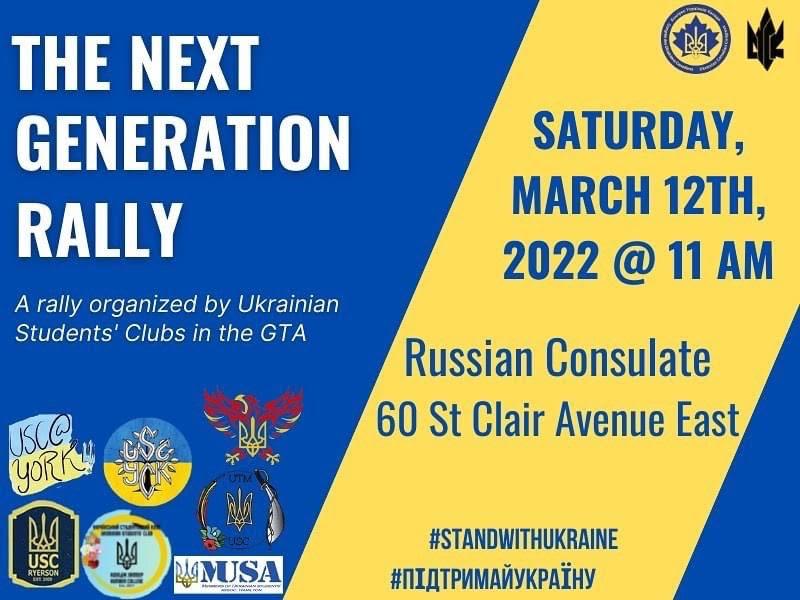 Protesters held signs such as "Sanction Russia," "Stop Russian Aggression" and "No Fly Zone Saves Lives." They yelled "Slava Ukraini," which translates to "Glory to Ukraine," and "Heroyam Slava," meaning "Glory to Heroes."

A no-fly zone refers to a proposal that NATO prevent unauthorized aircraft from flying over Ukraine. NATO officials have ruled out the option, with Defence Minister Anita Anand telling CBC'sThe Currenton Thursday that enforcing a no-fly zone would result in "severe and horrific escalation" in the conflict.

'We are the future'

Students said the demonstration is about amplifying the voices of the next generation of Ukrainian Canadians.

"We are here to show Putin that the next generation won't stay silent, and that we will continue to fight for what is right," said speaker Katya Kirpichova from the Ukrainian Students' Club at Ryerson University.

Marta Perehinets, a representative from the University of Toronto Ukrainian Students' Club, says the invasion has caused constant stress and fear since it began, and though she's thankful that her family is safe, it "makes you feel pretty helpless."

Alexandra Holyk, the president of the Ukrainian Students' Club at Ryerson University, said the student organizations are asking post-secondary institutions to take action to help students from Ukraine and other countries affected by conflict.

She said universities could provide extensions on assignments, same-day or next-day counselling services and grants for students who are supporting their families.

"All of the older generations typically say, 'Oh, kids don't really care, kids are always on their phones.' But within the Ukrainian community, we're very, very proud of our Ukrainian culture whether we're 99 years old or nine years old," she said.

"We're just trying to do everything we can from thousands of kilometres away."

Prev: Raila to fly to UK to sell agenda to diaspora community

Next: General Motors to recall all additional Bolt EVs, through MY 2022, for battery replacement; $1B cost - Green Car Congress