WASHINGTON—A mobile-phone app that pays users to perform basic observational tasks such as photography and has U.S. defense and intelligence clients suspended its activities in Ukraine on Friday after the Kyiv government accused it of being used by the Russians to target airstrikes as part of Moscow’s invasion.

San Francisco-based Premise Data Corp. said its work in Ukraine was on behalf of Western democracies looking to understand the state of infrastructure in the country, but it declined to provide more details. Premise said it believed it was a victim of a disinformation campaign. Its business in Ukraine predated the Russian invasion.

“Earlier today, Premise was identified in social media posts as being a tool used by Russian forces to locate Ukrainian targets. This is unequivocally false. Premise does not work for or support the Russian military or government. Our primary concern is that of the safety and welfare of the Ukrainian people,” the company’s chief executive, Maury Blackman, said in a statement.

“Out of an abundance of caution, Premise has suspended all operations in Ukraine and is closely monitoring this situation as it develops,” Mr. Blackman said. “Our company and our team worldwide strongly support Ukraine and the Ukrainian people defending themselves against this illegal act of aggression by Russia.” 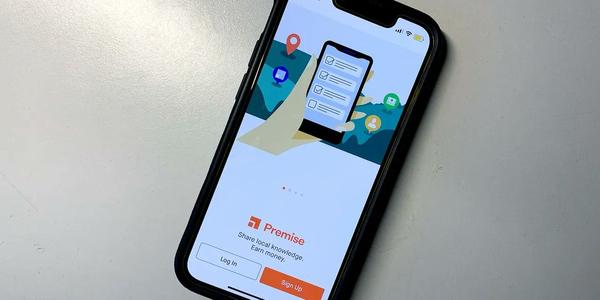 Several Twitter users on Friday purporting to be in Ukraine began to circulate reports that Premise was asking users of its app to identify locations with paint for potential bombings. The Twitter users didn’t respond to requests for comment.

The General Staff of the Armed Forces of Ukraine on Facebook warned that it had reports of Russian agents in Stryi, a city in western Ukraine, and other places using the app and warned the population about the dangers—a charge that the company denied. “The public statement of the Ukraine Defense Ministry that has gotten circulation is incorrect,” Premise’s CEO said.

Premise is one of a growing number of companies that rely on the proliferation of mobile phones as a way to turn billions of devices into sensors that gather open-source information useful to government security services around the world.

What Premise can offer its government clients is a way to do remote observation and other surveillance activities from afar. It also has the capability to turn the Bluetooth and wireless sensors of its users’ phones into a tool to map out cell networks and wifi access points, The Wall Street Journal has reported.

According to people familiar with the matter, Premise derives the majority of its revenue from the U.S. defense community—making it unlikely to be assisting the Russian government in the invasion. Premise provides personnel with top-secret U.S. clearances to military and intelligence programs inside the U.S. and to other U.S. allies, the WSJ has previously reported.

Prev: The War Of Affordable 4G Phones: JioPhone Vs Karbonn A40 Indian Vs Micromax Bharat 1

Next: Vivo T1 5G review: A new budget option with many plus points