Audi’s Q7 is finally back in India after a gap of nearly two years. It gets a new design, new interior and a change in powertrain. Does it still make sense to buy it or are you better off with its rivals?

Audi’s flagship three-row SUV, the Q7, was discontinued in the Indian market ever since the BS6 norms came into force from April 2020. But now, after an almost two-year hiatus, the SUV is making a comeback, albeit in its facelifted avatar.This is the same update that was globally revealed back in 2019.

With the mid-life refresh, the luxury SUV has had a change of heart along with a handful of cosmetic and feature enhancements. Does the Audi Q7 still have what it takes to make you go and spend that asking price of around Rs 85 lakh (ex-showroom)? We find out:

The facelifted Q7 seems to have taken a leaf out of the facelifted Q5’s book as it is trying to do away with the corporate appearance for a sportier and more aggressive look. Up front, you now get a larger single frame octagonal grille with vertical chrome slats, featuring Audi’s famous ‘Quattro’ badge. Audi has now equipped the Q7 with Matrix LED headlights and dapper tri-arrow LED DRLs. These units can control the beam to avoid dazzling the oncoming vehicles by controlling each LED element.

Further down, the facelifted SUV comes with a revised front bumper with bigger air dams and a faux skid plate to round off the fascia. The international-spec Q7, however, gets HD Matrix LED tech comprising laser lights that help in better illumination. But you can't have those here, not even as an option.

Its profile now features redesigned 19-inch alloy wheels, which, though handsome, should have at least been in dual-tone finish to make them more alluring. Audi has provided the SUV with running boards (optional) to ease the ingress and egress, especially for older passengers. Also, this is the angle where it looks most like an estate. However, the SUV has now grown a bit longer, resulting in a better road presence than before.

At the rear, the updates include a revised bumper with a faux skid plate and updated LED tail lights (with a chrome underline), resembling the headlights with the same tri-arrow pattern. And not to forget, the facelifted Q7 gets dynamic turn indicators in typical Audi fashion. Although Audi has tried to work its way around with a couple of nip-and-tucks to make the Q7 look more dominating on the road, it still looks more like an understated station wagon than an outright SUV. And given your preference, you will either like it a lot, or prefer the competition.

Step inside the SUV and you immediately realise the opulence in this premium luxury vehicle. Right from the door pads, to the dashboard, to the steering wheel, everything feels plush and has a soft-touch feel to it. Additionally, the facelifted Q7 also has a new dashboard layout borrowed from the current-gen Audis with a piano black finish, and aluminium and wood finishes to take the luxury factor up by a few notches.

With the mid-life update, the Q7 now comes with Audi’s latest MMI software for its new 10.1-inch touchscreen infotainment system and the smaller 8.6-inch display for climate control, below the main infotainment screen. It can also double up as a writing pad to input information. Both the screens perform their tasks seamlessly, are prompt to respond, and offer improved haptic feedback when used.

A downside, though, is that Audi has now done away with the swivel controller from the centre console for the touchscreen-integrated operations which makes you take your eyes off the road for operating select functions. However, the driver has the option to use voice commands to operate the climate control, navigation and multimedia to tackle this problem.

One of the highlights of the updated equipment list surely has to be the digital driver’s display, or in Audi speak, the Virtual Cockpit. It’s a well-integrated digital display which has all the necessary information sorted in a very organised manner. And here’s the best part- its inbuilt navigation display can be adjusted to fit the full screen to better help while driving.

Other features on board the flagship Audi SUV are the new 19-speaker Bang & Olufsen audio system, four-zone climate control, 30-colour ambient lighting, puddle lamps on all four doors, air quality sensor with fragrance, and rain-sensing wipers. But there are some glaring omissions such as ventilated seats and electric adjustment for the steering wheel. Also missing, as compared to the international-spec SUV, are connected car tech, Alexa voice activation, head-up display, Google Earth navigation, and optional rear wheel steering.

One thing that remains unchanged for the Q7 is that the cabin is large and spacious and offers generous amounts of seating space for six to seven adult occupants. Let's dive into it.

The front row of seats are large and accommodating, helping the driver and co-passenger feel comfortable even on longer drives. Also, the high-seating position ensures you get a wide and clear view outside. 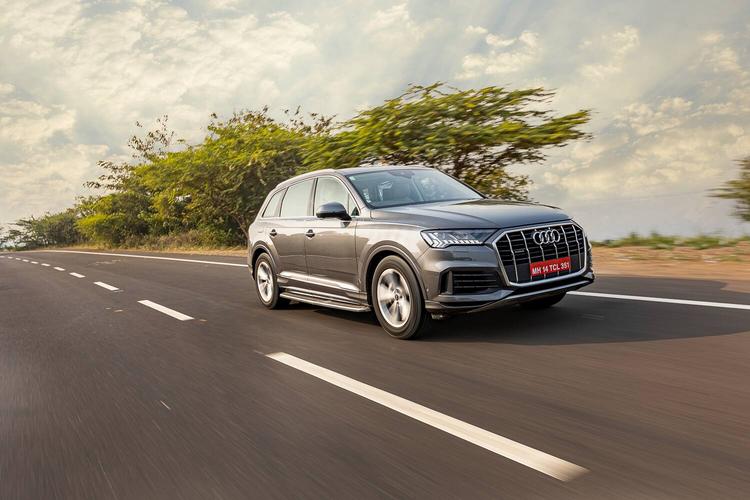 Special attention has been given to the second row of seats, as most of the owners are likely to spend the majority of their travel time here. The seats are very well cushioned and let you sink into them with the padding. Each of the three seats here can slide and recline individually to get into a more relaxed posture. Audi has also ensured that there’s space in abundance here as three occupants can sit without the shoulders rubbing. While there’s a sufficient amount of headroom for even six-footers, the central transmission tunnel does eat into the middle passenger’s legroom.

There is no lack of features here and you get two optional Android-powered tablets, B-pillar-mounted and central AC vents, and dual-zone climate control. You also get an armrest with cupholders, a panoramic sunroof, type-C charging ports, a 12V socket, and window shades. However, for a proper boss seat experience, we wish Audi could have given a wireless phone charger and controls for the front passenger seat.

If you are planning to frequently travel with more than five people or have a big family, the third row of seats will come as a blessing. The second-row seats can fold and tumble in a two-step process, with hydraulic assist in the last stage, offering easy ingress and egress. While the third-row seats seem good enough for city journeys even for adults, occupants will mostly be required to sit in a squatting position due to the low seating layout. In terms of features, you only get big cupholders and speakers. Aside from that, this row misses out on AC vents, climate controls, and even mobile phone chargers.

Another area where there’s no shortage of space is the boot of the SUV. Even with the third row up, the facelifted Q7’s trunk can take up a couple of large suitcases for those longer trips along with a set of duffle bags too. And if you still think that’s less, the third row can be electrically folded down with the press of a button to open up more space for loading your equipment. Like before, the backrest on the second-row seats can be split 35:30:35 to increase the luggage space in the cabin and give you a bed’s worth of space.

One of the advantages of the Q7, in particular, is that you can lower the loading lip (this too on the pressing of a button) thanks to the rear air suspension. Another unique feature is that the Q7 now comes with a kick-to-open functionality for its tailgate, which can even be used to close the boot lid.

Audi has equipped the facelifted SUV with eight airbags, front and rear parking sensors, hill-hold, a 360-degree camera, and hill-descent control. The new Q7 also comes with lane departure warning and assist which can keep the Audi in lane on a well marked road with mild steering inputs and park assist which can take over the parking duties for you. We would have loved to see it being offered with the complete Advanced Driver Assistance Systems (ADAS) kit encompassing adaptive cruise control and active speed assist, provided on the international-spec model.

The Q7, with the facelift, has now become a petrol-only offering. Audi has now provided its flagship three-row SUV with a 3-litre V6 turbo-petrol engine (340PS/500Nm), offered with a 48V mild-hybrid setup. As you can expect from the flagship SUV, it does get Audi’s popular ‘Quattro’ all-wheel drivetrain and comes with an 8-speed automatic transmission. It surely is a hard pill to digest that Audi doesn’t offer it with a diesel heart and is certain to be missed by the mile munchers.

Audi offered the pre-facelift model with both petrol and diesel engines, but the facelifted Q7’s petrol mill is more power-packed than the former’s. The new unit at work is majorly unnoticeable until and unless you decide to go all out. Power is sent in a linear way with the torque assist aiding on lower speeds by putting the SUV in a coasting mode.

Although the gearshifts are jerk-free, they can still be made out as they are not completely unnoticeable. And while the gearbox has been tuned to upshift quickly to keep efficiency in check, Audi has given you the choice of using the paddle shifters for you to have a better control over the SUV’s shifts. The Audi SUV feels at home even when doing speeds of over 100kmph and will suit you well if you are someone who enjoys going on family road trips.

The Q7 also has seven drive modes – Auto, Efficiency, Dynamic, Comfort, Off-road, All-road, and Individual. Efficiency will help you save on petrol in the city by upshifting early, while Comfort provides a relaxing cruising experience. In Dynamic, the air suspension lowers the SUV and the throttle response is more accurate, while in Off-road mode, it raises the Q7. All-road, as the name suggests, is suitable for all kinds of surfaces. And lastly, the Individual mode allows you to customise the steering, drivetrain and suspension setup as per your needs.

Our infamous bad roads and potholes are no trouble for the facelifted Q7 as it glides over them effortlessly. Yet, harsh potholes and surfaces do seep through the otherwise well-cushioned cabin. This is down to the SUV’s softened suspension setup, especially in the Comfort mode.

If you shift to the Dynamic mode, the suspension lowers and stiffens up a bit but then it also results in less in-cabin body movement giving you a much more stable ride. Even when there’s some body roll inside, it never feels jarring.

We have to appreciate the Q7’s impressive cabin insulation as well. The SUV ticks all the right boxes when it comes to preventing outside noises and vibrations from entering the cabin. The suspension setup and cabin insulation can make a person wish to take a nap inside and not be bothered by any undulations or unwanted noises, giving a lounge-like experience. A special mention to the chunky sidewalls of the 19-inch wheels which work to absorb most of these undesirable surfaces and patches.

With the facelift, it seems like Audi knew clearly what it wanted to give to the SUV, and has managed to get many things right including providing a sportier appeal to a comfortable in-cabin experience in the SUV.

However, when you start factoring in the lack of a diesel powertrain along with the obvious feature misses, it does start to lose some points especially when its rivals like the BMW X5, Mercedes-Benz GLE, andVolvo XC90 are considered. But for those looking to buy a luxury 7-seater SUV for their family whose preference is comfort and effortless driveability, the Q7 will surely make you go for it.

Prev: Wall Street Loves These 3 Growth Stocks -- Should You?

Next: Audi’s Next SUV For India Will Be The Q7, Price Announcement Likely In December