Here are some affordable electric scooters to buy to you save on fuel costs.

EVs are all the rage these days. Ever since petrol has breached the Rs 100 mark, city commuters are finding it increasingly difficult to justify using their ICE vehicles and prefer either public transport or switch to an electric vehicle. According to a recent estimate, EVs sold 40,000 units in just one month. This shows that people are ready to jump on the electric future of transport. So, to expedite your purchasing decision, we have compiled a list of two-wheelers that are one the most practical in terms of price and performance. We have set some parameters in this list. Every vehicle mentioned will have at least40 Kmph top speed and have a claimedrange of at least 80 km and above. So, without any delay, let’s get right into thecheapest electric scooters available in India right now.

Ampere is Coimbatore based electric vehicle company, which has tied up with Greaves cotton for all the engineering behind its two-wheelers. The Ampere Zeal Ex is one of their entry-level offerings. Ampere claims up to 55 Kmph top speed and a range of 121 km on a single charge for the electric scooter. The EV has a 1200W motor that can go from 0-45km/hr speed in 11 seconds. There is a removable 60V, 28Ah battery that can be charged at home in about 5-6 hours.

Other features include shock absorbers, a front glove box, regenerative braking with EBS, and an anti-theft alarm. The Ampere Zeal EX is available in 3 colours: Burgundy Red, Pearl White, and Graphite Black.

The Ampere Zeal EX is available in offline dealerships across the country.

Electric vehicle subsidy in India 2022: Here’s how much subsidy you get on electric cars and scooters in India from centre and state

Electric car vs petrol car: cost of running, maintenance, and everything else you need to know

The Hero Electric NYX HX is another scooter that promises a good balance of range and speed on a budget. This machine can pull up upto 165km of range (although Hero explicitly mentions it may vary by as much as 25 percent due to various factors such as tyre pressure, road speed, battery age, etc.). This cheapest electric scooter in India can rev up to 42 kmph speed with its 600W motor (peak power:1300W). The Hero Electric HYX HX has a portable 51.2V/30Ah double battery that can be charged in 4-5 hours. It has a unique split folding seat for added convenience on the go.

In addition to this, the scooter features a Telescopic front suspension, a front USB port for charging your smartphone, 10-inch alloy wheels, regenerative braking with its drum brakes, an in-dash bottle holder, and a combo braking system. The Hero electric scooter is available in black and silver colours.

The Hero Electric HYX HX electric scooter is also available to buy in offline dealerships across the country. 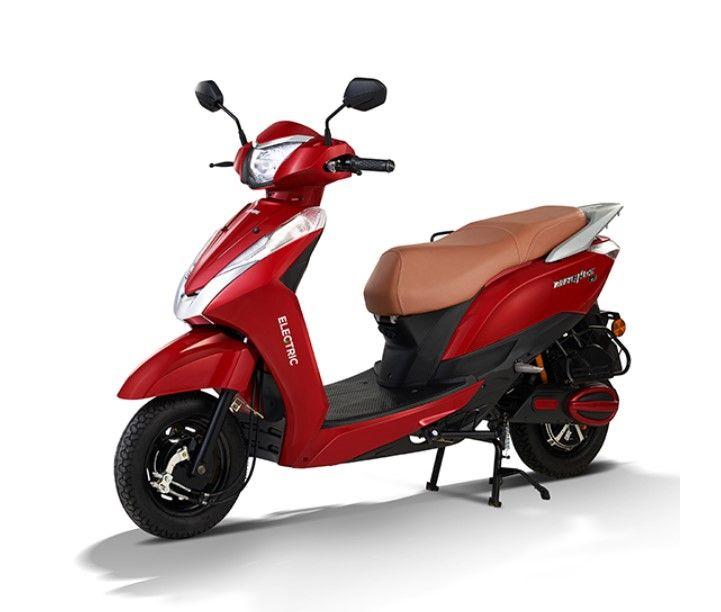 The Ampere Magnus EX is an upgraded model of the Zeal EX. The electric two-wheeler has a top speed of 53 Kmph and an ARAI tested range of 121km. There is a detachable 60V, 28 Ah Li-Ion battery which takes about 5-6 hours to charge. The scooter employs a couple of drum brakes with CBS as well. However, the standout features of the Ampere Magnus EX have to be its remote keyless entry, large boot space with an LED light, USB charger for smartphones, telescopic front suspension, and shock absorbers.

The scooter is powered by a 1200W motor for quick acceleration of 0-53 km/hr in about 10 seconds. The Ampere electric scooter also features an anti-theft alarm system for safety. It is available in 3 colours (Metallic Red, Galactic Gray, and Graphite Black).

The Hero Electric Photon HX is the flagship model from the brand that is designed like an old classic scooter with round headlamps and a slender body. The scooter has a top speed of 45 kmph and a claimed range of 108km on a single charge. This affordableelectric scooter from Hero also has a 72V/26Ah detachable battery that takes about 5 hours for a full charge. The 1200W built-in motor has up to 1800W peak power. For added safety, the Hero Electric Photon HX also features 10-inch alloy wheels with drum brakes and CBS on both the front and rear.

Standout features of the Hero electric scooter include a remote lock and anti-theft alarm system, regenerative braking, telescopic front suspension, and LED headlamps with a digital instrument cluster. The Photos HX is available in Black and Gold colours.

PURE is actually an acronym for Power Using Renewable Energy. The startup company, founded in IIT Hyderabad, manufactures scooters with its own Lithium-Ion batteries called PURE Lithium. The PURE EV Neo ETrance look is no exception, and it looks like an enticing option owing to its features and specifications. The electric scooter has a claimed top speed of 60 Kmph and a range of 90-120 km. The scooter houses a powerful 1500W motor with up to 2200W of peak power and a detachable 60 V/ 2.5 kWh battery, which can be charged in about 4 hours.

The PURE EV ePluto 7G is the flagship model from PURE. The design is reminiscent of the old classic scooters from the 1980s with a round headlamp and slender design. The scooter has the same 1500W motor that generates a peak power of 2200W. The PURE EV ePluto EV gives us the same 60 Kmph top speed and up to 120 km of range as the Pure EV Neo ETrance. So, the main difference lies in the design and the aesthetics of the scooter.

Benling is a Chinese company headquartered in Dongguan, China. The firm launched its first electric scooter, the Benling Aura in India in January last year. This scooter also has a retro styling and is available in 3 colours, namely Matte Black, Matte Purple, and Glossy Blue. The scooter has a 2500W motor, which gives the scooter up to 60 Kmph top speed and 120 km of range, along with a 72V, 40 Ah detachable battery, which can be charged in about 4 hours. In addition to that, the Benling Aura electric scooter has a 10W USB charger to charge your smartphone on the front.

The electric scooter also boasts some nifty features such as a side stand sensor, regenerative braking, anti-theft alarm, smart key with a remote controller, 4-speed modes, smart breakdown assistance system, and smart parking assistance. The scooter has a front telescopic suspension coupled with a disc brake on its 10-inch alloy wheels.

The OLA S1 was the most anticipated vehicle of 2021. The deliveries of the electric scooter have finally started, and to say the least, it is a power-packed scooter. The Ola S1 has a top speed of 90 Kmph and an IDC-certified range of 121 km. The affordable electric scooter from Ola also touts a 5,500 W ( 8500 W peak power) motor that can do 0 to 40 Kmph sprint in just 3.6 seconds. The battery is 3.97 KWh which can be charged in about 6.5 hours. However, it is a non-removable battery, so you will have to charge it in a station or in your parking lot with its supplied 750W charger.

The OLA S1 does not unlock via keys. It can be unlocked either by the voice assistant or by the app. The scooter also touts a 7-inch touchscreen with MoveOS operating system, built-in speakers and microphone for hands-free calling, arena limit, time fence, speed limit and mode restriction. You can also navigate, send messages and connect Bluetooth devices with the Ola S1. The scooter also has a reverse mode, disc brakes with CBS, and 36L boot space, among other things.

Revolt Motors is a company founded by Rahul Sharma, CEO of Micromax mobiles. The Revolt Motors’ RV 300 is an electric bike that comes with a top speed of 65 Kmph and a range of up to 180 km. The bike has three modes, each with its maximum speed and range. At the heart of the Revolt RV 300 lies a 1500W motor that is capable of generating a torque of 150 NM. The bike has a front upside-down forks and rear mono-shock suspension for a smooth ride experience.

Both the front and rear brakes are equipped with discs and have CBS for extra safety. The electric bike has an adjustable footpeg and a high ground clearance of 225mm. The 60V, 2.7kWh removable battery of the RV 300 can be charged fully in about 4.2 hours. The two-wheeler comes with app support as well. Users can download the ‘My Revolt’ app on their mobile phones to check the battery status of the bike, call for an SOS battery replacement, trigger safety functions such as geofencing and geolocation, and swap batteries with the revolt switch function. The revolt RV 300 is available in two colours, grey and black.

Prev: Sigma is giving away $60K in scholarships to photographers and filmmakers