Home > Samsung > Gionee A1 Lite review: It’s all about taking Selfie and that’s it!

Gionee is trying to make a new identity in this overly competitive market. The company has been eyeing the selfie-obsessed generation, which is well reflected in its A1 series. We already have A1 and A1 Plus that mainly falls under mid-range and mid-premium range. But the heart of the smartphone industry lies in the budget segment. And that is why the company has introduced Gionee A1 Lite for Rs 14,999, to capture those selfie lovers, who do not want to spend a fortune for a good selfie camera.

The major highlight of the smartphone is the 20-megapixel selfie shooter along with an impressive 4000mAh battery. But does it justify its price tag? We have been using the device for a while now and this what we think about the Gionee A1 Lite

Sadly, we have reached that point of saturation where the design of the smartphones, especially at this price point, does not excite us. With every launch, we see a device which is identical to other and Gionee A1 Lite is no different. The smartphone has a fair share of resemblance to other smartphones that are present in the market. That said, the smartphone is built on a solid line and the ergonomic design makes it easier to hold. The phone is 8mm thick, but we impressed from the fact that, in spite of featuring a 4000mAh battery, the device feels light.

The 5.3-inch screen makes it quite compact and easy to hold. Giving a brief about some key design aesthetics, the screen on the front comes with some minimum side bezels and just below you will find physical navigation buttons, while at the top, there is a front-facing camera along with earpiece and some other sensors. The right houses volume controls and power on/off button, while the left sports a dual-SIM tray. The bottom comes with a micro USB port and 3.5mm audio jack, while the top is bare.

The back houses a primary camera along with LED flash and just beneath it, you will find a fingerprint sensor. The bottom of the back panel comes loaded with a speaker grille. Overall, the smartphone does gives a premium look and the compact form factor does make it easier to fit into your palm.

Moving to the display department, the phone sports a 5.3 inch HD (1280 X 720 pixels) 2.5D curved glass display with Corning Gorilla Glass 3 protection. At a time when most of the manufacturers are offering a full HD display on their respective smartphones, Gionee has taken a back step and added an HD resolution screen. The company could have added a full HD screen, which would have added some more weight on the plus of the device. The display has some good viewing angles and the outdoor visibility is quite good, but you can feel the difference of watching a 1080p video on this screen and watching it on a Full HD screen. 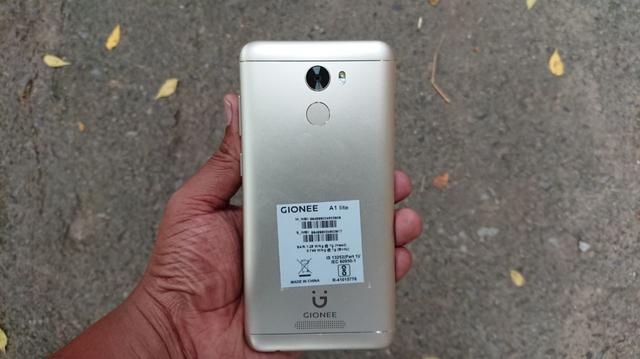 It’s all about taking selfies!

The major highlight of the Gionee A1 Lite is the 20-megapixel front camera with selfie flash. For the rear, there is a 13-megapixel rear camera with LED flash. On paper, the camera specs look pretty interesting and not many smartphones come with a 20-megapixel sensor. However, in real life things becomes a bit different. To start with the selfie camera, under ideal lighting condition, the photo came out to be well-detailed and crisp. However, one problem we faced during our review time was the fact that most of the times the images were softly focused. This is especially noticeable when you click selfies under indoor lighting conditions. The selfie flash does make a difference when you are clicking photos in dark places and beautify mode works pretty well also.

The rear camera performance is turned out to be a mixed bag. Though it took some really good shots under broad daylight with the colour being close to the source and the dynamic range is acceptable. However, when you move closer to take macro shots, the device takes a lot of time to lock focus and sometimes (or most of the times) the pictures come out to be softly focused. The low light performance is average as well, and one can easily see the traces of gains and noise in the images. The camera UI is a bit buggy in nature, but some modes like professional, smart scene and gif are fun to play with.

On the hardware front, it is powered by a 1.3 GHz octa-core MediaTek MT6753 processor with Mali T-720 GPU. It has 3GB RAM and 32GB of internal storage, which can be further expanded up to 256GB via micro SD card. At a time when others are trying their level best to provide the latest and greatest hardware at this price point, Gionee is using an age-old processor in this one. The overall performance of the device is not up to the mark. Though under normal usage, the device does not show any sign of lag, however, things get a bit rough when you begin with the multitasking. The moment the background apps increases, the phone starts choking.

The problem is also noticeable when you are into gaming. Casual games like Temple Run 2 or Angry Birds works smoothly, but it comes to high-intense games like Asphalt 8: Airborne, Hitman: Sniper, the device starts to shimmer and one can easily notice frame drops and lags. Another major problem we encountered during our review period was the problem of over-heating. When you are, for example, watching a movie or downloading some heavy files or recording video with the phone, it tends to heat up at an alarming rate, which makes it difficult to hold after a certain period of time. This is primarily because of the MediaTek processor, as it does have a bad reputation in terms of heating issues.

Coming to the software part, the Gionee A1 Lite runs on Android 7.0 Nougat with company’s own Amigo 4.0 UI running on top of it. This is one department Gionee needs to work hard. The user interface might look a bit cartoonish for some, but what spoils the whole mood is the number of bloatware that comes pre-installed in this phone. Secondly, the user interface screams for some optimization on the core level.

However, the interface comes loaded with some interesting features as well. There some smart gestures through which one can pick up a call, pause an alarm etc. The Suspend button is useful as it is basically a floating button which has back, home and lock buttons along with the ability to squeeze the screen size, but you are not going to squeeze it anyway.

Another major highlight of the device is the 4000mAh battery, which the company claims can offer up to 295 hours of standby time. During our testing period, we found out that the battery was able to last a day under normal usage, which including checking Facebook updates, replying to WhatsApp messages, calling and net surfing. However, under power usage, the battery depletes at a faster rate and there were times when you need to recharge your battery twice a day. The main reason behind this is the power hungry processor and the consistent problem of heating.

Next: Gionee A1 Android Smartphone Review