Chinese smartphone maker Gionee will soon announce the successor to its selfie-focused handset Gionee A1. The upcoming handset- Gionee A1 Plus was originally showcased in Mobile World congress (MWC 2017) along with the Gionee A1 which features a capable 16MP front camera and now sells at Rs. 16,500 on Amazon.in.

The bigger A1 Plus brings some notable upgrades in camera, display and battery department. The phablet sports a massive 6-inch Full HD screen, a 20MP selfie camera, a dual-lens rear camera setup and a big 4,550 mAh battery unit.

This makes it compete against the recently launched Xiaomi Mi Max 2 that sports even bigger 5.44-inch screen and bigger 5,300 mAh battery unit. However Xiaomi Mi Max 2 lacks behind in camera department, as far as specs on papers are concerned.

This brings us to the question, 'Is Gionee A1 Plus a better big screen phablet'? Let's try to find this out with the first impressions of Gionee A1 Plus

We have seen a growing trend of big-screen devices in last two years and Gionee A1 Plus fits right into the category. The smartphone sports a large 6-inch screen and certainly feels big for one-hand operation; however the rounded corners and gentle curves makes it quite ergonomic.

While you would need two hands to operate the handset in some situations, the basic screen navigation, calling, scrolling the Facebook and Instagram timeline can still be done without any major issues. The weight is also quite understandable as there's a big 4,500 mAh battery unit inside powering the device.

Gionee A1 Plus is made out of metal and feels sturdy in hands. The smartphone also looks quite premium, especially when seen from the rear panel where you will find the dual-lens camera setup, dual LED flash and Gionee's trademark branding which can be easily mistaken for a circular fingerprint scanner.

The right side of the handset has volume rockers and power button that offers good feedback, while the hybrid SIM card tray is placed on the left edge. You can click the power button thrice to trigger the panic button that automatically connects the call to the emergency number, a handy feature in emergency situations.

The clickable home button on the front has the fingerprint sensor embedded in it that unlocks the handset in a jiffy. The 3.5mm headphone jack is placed on top. 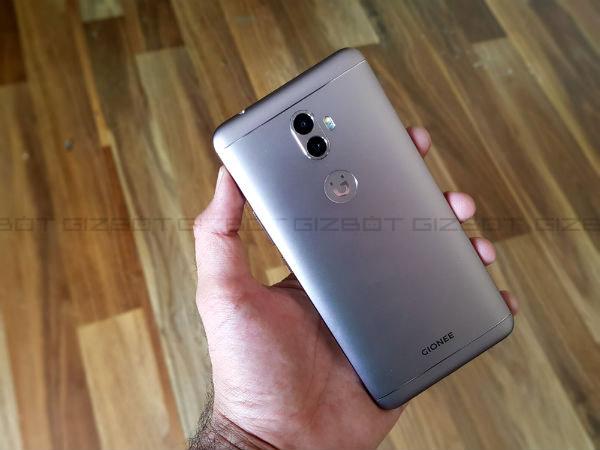 The Gionee A1 sports a 6-inch Full HD IPS display with 2.5D curved glass protection. The display offers a resolution of 1080x1920 pixels resulting in a pixel count of and 367 ppi. The display is crisp and colours look vibrant. The screen is quite comfortable to use in daylight and the 2.5D curved glass makes for some good viewing angles, which are quite necessary for big screen phones as these are mostly used to consume multimedia content.

I have reviewed the previous Gionee A1 and its 16MP selfie camera capture good selfies. The one on Gionee A1 Plus is even better and delivers amazing results.

The phablet features a 20MP front camera that clicks crisp and vibrant selfies. The results are quite impressive and will certainly please selfie lovers. The front camera is also supported by a LED flashlight to brighten up the images in non-ideal light conditions. You also get Face beauty mode to tweak the selfies you capture.

The company has also stepped up the game by introducing a dual-lens rear camera setup on the Gionee A1 Plus. The phablet sports a 13MP+5MP rear camera that is capable to deliver an impressive depth of field effect.

The pictures it captures have a good bokeh effect that looks quite natural. We will evaluate the complete potential of the camera while reviewing the handset in the coming week.

Gionee A1 Plus has the same customized skin- Amigo OS 4.0 based on the latest Android 7.0 Nougat that we have tested on Gionee A1. While it feels quite cluttered, it is also one of the most customizable software layers in the market. There's a dedicated online marketplace where you can download themes, wallpapers and widgets to customize the look and feel of your handset.

The settings menu also allows you to set smart gestures and manage touch capacitive buttons functionality to operate the handset with an ease in everyday usage. Besides, there are several nifty smart settings such as glove mode, edge bar that brings a window of predefined controls on the edges of the screen and skylight mode to make it easy to use the touch screen in case you have applied a flip cover on your smartphone.

Like the previous Gionee A1, the bigger A1 Plus is also backed by a MediaTek Helio chipset paired with 4GB of RAM to support multitasking. However this time the company has used the Helio P25 octa-core chip that comprises of 4 Cortex A-53 cores clocked at 2.5GHz and the other four clocked at 1.4GHz.

It's been more than three days that I am using the handset and haven't come across any performance issues. The 4GB RAM makes sure the handset runs multiple applications simultaneously without breaking a sweat. I am also playing Marvel Champions on the phablet and haven't noticed any frame drops. We will also evaluate other aspects of the handset's performance in the coming week to give a final verdict on the smartphone's computing and graphical performance.

Storage will not be an issue for users as Gionee A1 comes with 64GB of internal storage that can be expanded by up to 256GB via microSD card.

Battery and Connectivity: Can easily last for two days

Gionee has always focused on delivering a good battery life and the trend continues with the Gionee A1 Plus. The phablet draws power from a big 4,550 mAh battery unit that managed to last for two days on a heavy usage. The smartphone also supports fast charging and comes with a number of battery optimization modes to reduce the power consumption.

As far as connectivity goes, Gionee A1 has Wi-Fi, Bluetooth, dual-SIM support, 4G LTE and VoLTE and GPS.

Gionee A1 Plus is a significant upgrade over the previous Gionee A1. The company has fitted a big Full HD screen to please users who love to play games and stream videos on their mobile devices. The camera performance is also significantly improved and the phablet can also last long with the help of its big battery unit.

Now it all depends on the pricing of the handset that can make it a success or a flop in the crowded Indian smartphone market. Stay tuned for the pricing and availability of Gionee A1 Plus on GIZBOT.

Next: Under Rs 10 Lakh Cars Launched In 2021 That Surprised Everyone: Punch, Kiger & More