Home > Samsung > Gionee A1 Plus Review: A bigger better Gionee A1 News Notification

From the stables of a Chinese smartphone manufacturer based in Shenzhen, Guangdong, comes the sequel of the GiONEE A1, the A1 Plus. We earlier had a brief limbo with the A1 in March and loved its selfies camera. And now, when we received the heavier and bigger brother, the A1 Plus, we immediately put it to test.

The Indian smartphone market has seen a volatile upfront with all the Chinese brands perforating the market with their shiny flagship-py devices, both online and offline. But Gionee remains one of the first Chinese brands to have made an entrance in the Indian market and establish a huge offline presence in India.

The Gionee A1 Plus was recently launched with a bigger screen, bigger battery, and a dual-camera unit. But one of the first things we noticed about the A1 Plus is the weight — a whopping 226g — which is pretty heavier as compared to any other handset in the segment. However it weighs close to the Mi Max 2 (211g) which is also a phablet and feels a tad lighter. But the Gionee A1 Plus is thicker and is much chunkier to hold than its rivals (Over 9mm thick) — a good grip.

The design is similar to the Gionee A1. As usual, the volume rockers are situated on the right bezel with the power button underneath. The left bezel has the SIM card tray. The front houses the home button with a built-in fingerprint sensor. The display is a good 6-inch IPS LCD full HD display. Watching videos and movies was a joy on this screen.

The display is protected by 2.5D Corning Gorilla Glass 3, which protects the screen from minor scuffs and scratches. However, the screen slab on the A1 Plus sits on metal frame just above the phone’s body, which puts off the effects of the curvature, slightly.

The phone however feels pretty solid and sturdy to hold, and is definitely not for someone with small hands — we had a tough time, trust us! Thanks to the all-metal and glass design, the phone feels top-heavy to hold and move around.

The Gionee A1 Plus sees improvement in the spec sheet, but the improvements are minor in comparison to the A1. The biggest change is the new SoC — A MediaTek Helio P25 clocked at 2.6GHz on all eight cores. The A1 Plus sports 4GB of RAM, 64GB of internal storage (expandable by up to 256GB), and features added compatibility for VoLTE and ViLTE.

The software is updated for the better and the smartphone runs Android Nougat 7.0 out-of-the-box with Gionee’s Amigo 4.0 UI on top. The UI is smooth and does the job well, but we felt it could have been a lot better without the added bloatware. 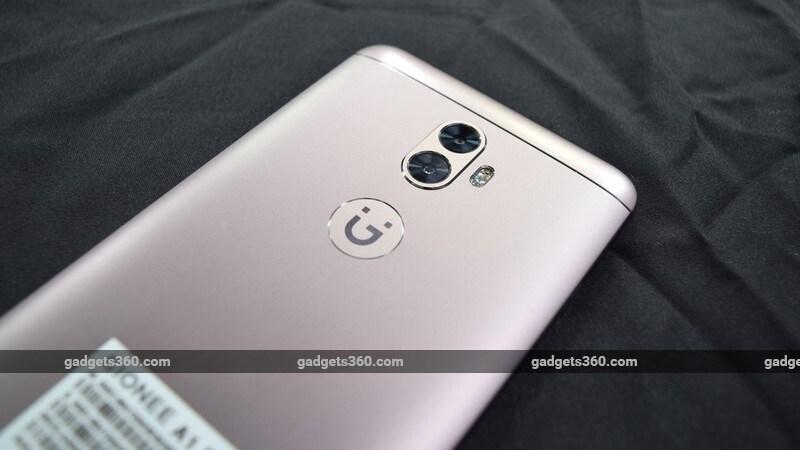 The UI cannot be skinned, has oddly placed settings and the notification window, which we found needlessly complicated. However, certain apps and functions could be easily and quickly accessed using the edge bar, which shows shortcuts to certain set of apps or functions. Additionally, smart gestures will help you navigate around easily. Other than the UI changes, the A1 Plus also sports reverse charging, which means you can now use the Gionee A1 Plus’ large battery to charge other USB devices by using it as a battery pack.

The fingerprint sensor right upfront, embedded into the physical home button and is smaller than the sensors you would normally see on other smartphones. Weirdly, the sensor was not as accurate, and at many times it took more than two tries to unlock the phone, which is pretty bothersome.

One of the main USP of the A1 Plus is its cameras. With a dual-sensor rear camera set up and a 20MP unit along with lamp flash on the front, we definitely expected that the camera would be as goodas similarly priced rivals like the Honor 8, Huawei P9, or the Micromax Dual 5. However, it did not impress us as much.

The rear camera setup comprises of a primary 13MP and a secondary 5MP sensor, which helps create a bokeh effect for portrait shots. The rear camera can only shoot videos at 1080p, while the front camera can record at 720p.

Captured pictures look above average in broad daylight with less noise, but surely produce sharp details and good a color reproduction. Photos in shadow areas are average. The camera is decent for selfies from the 20MP front camera. Pictures are well composed, colored, and vibrant.

So all-in-all, since the camera is mainly focused for selfies users, the Gionee A1 Plus performs to its promise. However, Gionee should have also focused on the rear camera — especially at this price point. If we are to compare this handset with similarly-priced models out there, the Honor 8 Pro and the OnePlus 5 stand out with a marginal price difference — especially when the latter two can show strengths in the camera and performance areas.

Battery on the A1 Plus gets a bump — 4550mAh. This means extensive gaming, music, videos, movies and more, were a breeze without the battery level plummeting. We managed to squeeze out a strong 40 hours on a single charge, with still more room to survive before hitting the charger. In short, casual users can definitely expect a 2 – 3 day battery life. We were impressed with the battery life, considering the A1 Plus has a bigger screen and a faster MediaTek P25 SoC that it has to power all day.

The A1 Plus has a built-in intelligent quick charging feature — it initially charges the phone at full speed, and gradually reduces the voltage as the battery nears full capacity. Charging the handset from zero to full takes just an hour and half, which, considering the huge internal battery, is pretty decent.

Though the Gionee A1 Plus performs above average in its category, the price tag seems to be a bit of a put off. As mentioned earlier, you could shell out a few thousands more for a flagship smartphone from its rivals. However, if you want a good large handset, with a long running battery, big display for entertainment and a great selfies camera, we would recommend the Gionee A1 Plus.

Prev: Gionee A1 review: A great phone, but it’s not flawless

Next: Which are the Top Mobile Racing Games for iOS and Android in 2021?