After launching the generic A1 series, Gionee released the top-end A1 Plus in India last month. The new phone, which costs Rs. 26,999 is bigger and superior in terms of looks and internal hardware over the former.

We had the opportunity to test Gionee A1 Plus for close to three weeks and were particularly impressed with the dual-camera's capabilities. Here's our take on the other aspects of the Gionee phone.

Gionee A1 Plus display and design review (4/5)

Besides incorporating a huge 6.0-inch screen for the Gionee A1 Plus (166.4 mm tall and 83.3 mm wide in dimensions), the company has used copious amount of metal for the construction. It weighs close to a quarter of a kg (226g to be precise) and 9 mm thick, making it quite a challenge to hold it in the hand. Having said that, the generous quantity of metal has not gone waste, as it not only to make the phone look truly premium but also adds stability to the structure.

Gionee A1 Plus and any other branded phone with full-metal body have one limitation though. They get easily dented when dropped on a hard surface. Thankfully, despite getting hit, it saves the internal components from breaking and guarantees longer durability of the phone.

In terms of design aspects, Gionee A1 Plus comes with standard rectangular candy bar shape, but the curved corners on the edges and 2.5D glass cover on the front display panel make the phone visually appealing.

As far as the viewing experience on the display is concerned, it is a delight to watch movies and TV series on Gionee A1 Plus. And also playing graphics-rich mobile games such as the Asphalt 8: Airborne was enthralling, thanks to full HD resolution screen.

Gionee A1 Plus performance review (4/5)

Gionee A1 Plus comes packed with 2.36 GHz MediaTek Helio P25 octa-cores CPU, 4GB RAM and 64GB, which can also be expanded further up to 256GB via microSD card. 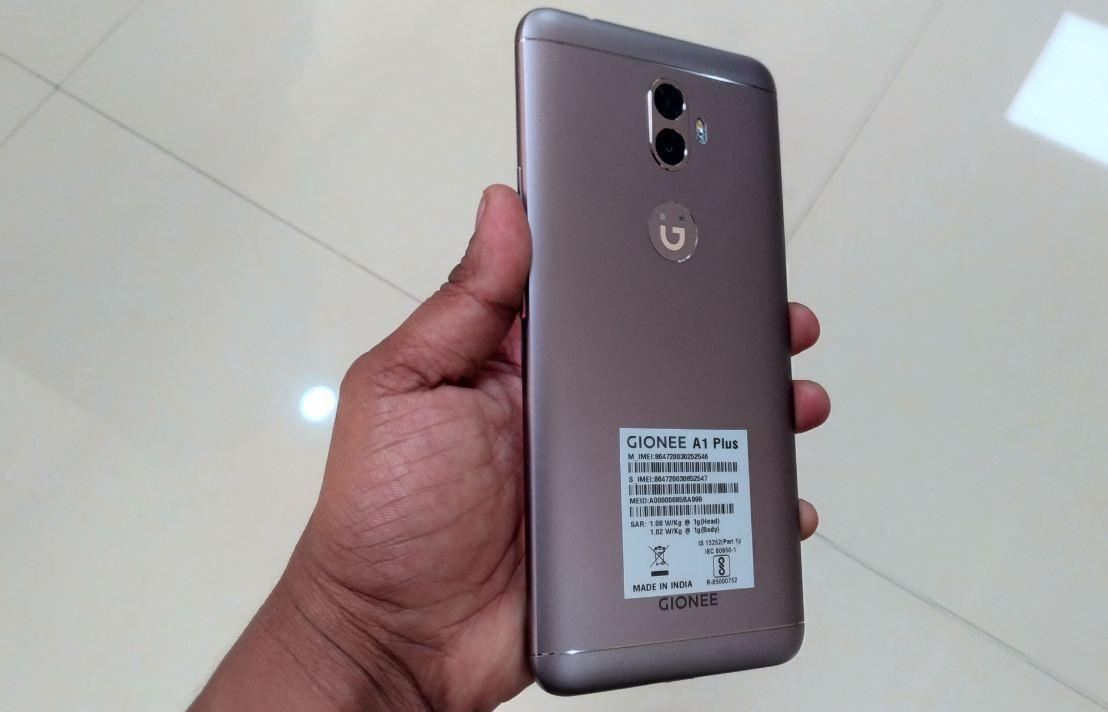 As far as the performance is concerned, Gionee A1 Plus does not disappoint. It scored respectable 67,935 points on AnTuTu benchmarking application. And on Geekbench v4.0, the A1 Plus got 825 and 3871 points in terms of single-core and multi-core tests, respectively.

In our practical tests, Gionee A1 Plus was snappy and responded well in terms app launching and showed no signs of lag during gaming and photography sessions.

In our tests, it took stunning pictures in bright sunny and twilight (during early morning and evening) conditions. We were especially impressed with the Bokeh blur effect of the portrait mode. Even macro-photography experience is also good.

But, in the night, image quality was not up to the mark, but it is decent enough for a sub-Rs. 30,000 phone series.

Gionee A1 Plus houses pretty big 4,550mAh battery and during the tests, which included audio (& video) calling, a session of gaming, photography and web browsing, easily lasted a whole day and still had juice in it to work for another three hours (as per battery life reading. It scored respectable 15,975 points on AnTuTu Battery tests. It also comes with fast charging technology and it was able to fully charge the phone's big battery from zero within two hours.

Gionee A1 Plus review: Final Verdict (4)

During the review period, we couldn't find any glaring issue in Gionee A1 Plus. Its camera both front and the back were exceptionally good and the battery life too was also of praise worthy. However, the price is a bit expensive compared to rivals. My point is Gionee A1 Plus, despite being a good reliable phablet, has lot of competition in the market.