Today, Honor Play5 Vitality Edition was launched in China and the day after tomorrow, on October 28, the company will unveil the new X30 lineup of devices- X30i and X30 Max. Where the X30i will be a lightweight device, the X30 Max may not be one. We can confirm that the Honor X30i will be a lightweight device based on the photos Honor posted on its Weibo page. The company is continuing to tease the device and there are some pretty cheese lines for describing the device, like ‘light as the wind, floating in the skies’.

As per the latest information we have, the Honor X30i will feature a 6.7-inch LCD with a punch hole, a 90hz refresh rate, and a 180Hz touch response latency. The phone is just 7.45mm thick and weigh 175 grams. MediaTek’s Dimensity 810 SoC will power the phone. 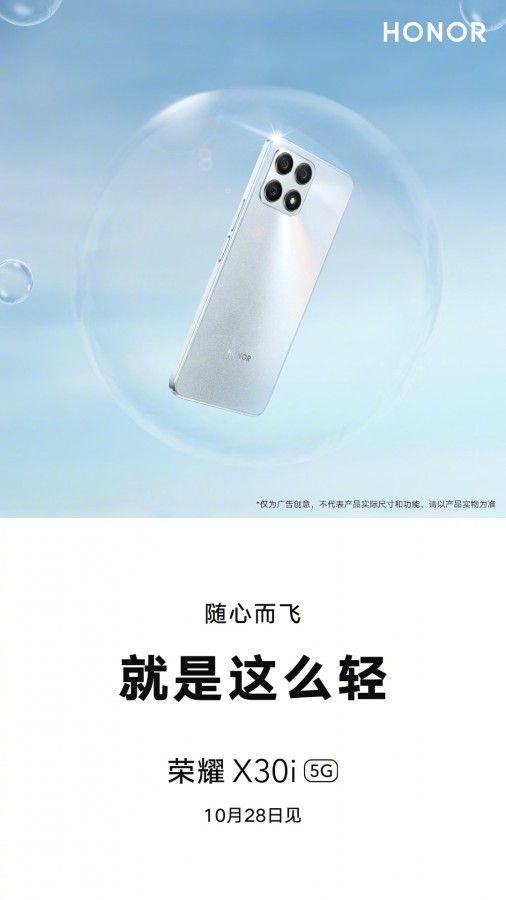 There will be a 48-megapixel primary shooter on the back, two 2-megapixel secondary cameras, and an LED flash. The phone will have an 8-megapixel selfie camera. The phone will pack a 4,000mAh battery, probably with 22.5W fast charging support, and it may come in four colour variants- Charm Sea Blue, Titanium Silver, Rose Gold and Night Black.

Also Read: OPPO Reno7 Pro Plus Might Not See the Light of Day

However, the specifications of the phone have not been officially confirmed by Honor. Alongside the Honor X30i, the X30 Max will also be unveiled. The phone is tipped to feature a huge 7.09-inch full HD+ LCD display. It will be powered by MediaTek Dimensity 900 SoC, paired with 8GB of RAM and 256GB onboard storage. The phone will come with a 64-megapixel primary shooter, alongside two 2-megapixel sensors and LED flash. The device is expected to ship with a 5000mAh battery and so it’s not going to be a thin and lightweight phone like the Honor X30i. The Honor X30 Max could be 8.3mm thick and weigh 227 grams.

So, it will be interesting to see how Honor tries to market these two phones to the consumers as one of them seems to be thin and lightweight which is quite preferred by many, while the other one has a huge display as its USP. Everything will be revealed the day after tomorrow and be sure that we will keep an eye on the launch.