Home > Samsung > I took a 12-hour Emirates flight from New York to Dubai on the Airbus A380 and it was the glamorous experience I had hoped for, even in economy class

Traveling to Dubai is often synonymous with traveling on Emirates, one of the flag carriers of the UAE that calls Dubai home.

The Middle Eastern mega carrier connects the world through Dubai International Airport with a glitzy fleet of Airbus A380 and Boeing 777 aircraft. And as of now, it's the only carrier flying non-stop between the Dubai and US.

Dubai reopened to tourists early on during the pandemic in July 2020. More than one year later, Emirates is returning to full strength in the US and its A380s are once more frequenting American airports.

Emirates' top US exec details how the airline will build back up in the country without skimping on caviar, in-flight showers, and the A380

New York is arguably Emirates' most important US destination, with two daily non-stop flights per day using the A380 and another daily one-stop flight through Milan, Italy.

I flew Emirates from New York to Dubai on an Airbus A380 when taking a recent trip to attend the Dubai Airshow. Here’s what the 12-hour flight was like.

Airbus racked up 4 times as many orders for aircraft as Boeing at Dubai, but Boeing stole the show with the 777x, its newest flagship

Emirates uses Terminal 4 at John F. Kennedy International Airport, home to Delta Air Lines and many of the other international carriers calling on New York.

Checking in for the flight was quite straightforward as the Emirates ticket counter was massive and quite easily identifiable. I joined the tail end of the line at around 8:00 a.m. for the 10:40 a.m. departure.

I watched as the line grew bigger behind me and was glad I arrived when I did. The Airbus A380 in Emirates' configuration can seat north of 500 passengers, and online check was not available for me as airline staff needed to check my passport and COVID-19 documentation.

It took no more than 25 minutes to reach the front of the line which was pretty quick, all things considered.

I got my ticket and headed to the security checkpoint, where I used the Transportation Security Administration's PreCheck line thanks to Emirates' participation in the program.

The terminal was quiet on the Saturday morning of my departure and I was able to breeze through the security screening in seconds.

Emirates uses the terminal's A Concourse, which houses some of the closest gates to the security checkpoint. Our flight was assigned Gate A7 with a boarding time of 9:40 a.m., exactly one hour before the scheduled departure time.

Nearly the entire end of the concourse was filled with passengers waiting to board the flight in a true testament to the size and capacity of the A380. Wheelchair attendants lined up at least three rows of wheelchair customers alone.

The prescribed boarding time of 9:40 a.m. came and went with no sign of boarding about to begin. I later found out that it was because of VIPs that needed to board early.

There are around 40 rows of economy class seats arranged in a 3-4-3 configuration spread across four compartments.

The first thing that stands out about the A380 is its sheer size. Even with the 10-abreast seating, there's still leftover room between the window seat and the sidewall.

It's also hard to believe that there are close to 100 seats above the economy class cabin.

I got to my assigned seat of 76A and got settled in for the long flight ahead. This was going to be my longest-ever flight in economy.

Atop each seat was a pillow and blanket kit along with a pair of headphones to use with the in-flight entertainment system.

The seat was quite comfortable and boasted an above-average 32 inches of pitch and 18 inches of width.

The window seat offered even more space thanks to the gap between the seat and the sidewall. I didn't feel closed in at all, which helped me mentally prepare for the next 12 hours.

I was also impressed by the size of the entertainment screen on the back of the seat.

Measuring 13.3 inches, the display takes up nearly the entire seat-back.

Other amenities at the seat include a USB charging port...

The A380 also has exterior cameras so flyers can see beyond just the windows. They’re primarily useful on the ground as there’s nothing to look at straight ahead while in the air, and they’re more intended for the pilots to use with passenger use just a bonus.

The captain came on the public announcement system to welcome us onboard and give some facts about the flight. A total of 24 cabin crew from 20 different countries speaking 20 different languages were servicing the aircraft with Florian, Mohammed, and Amir acting as cabin leaders.

A hygiene kit was first handed out including a face mask and hand sanitizer.

Economy class passengers also received an amenity kit include an eyeshade, socks, earplugs, and a dental kit. Stickers were also provided to let the crew know whether a passenger wanted to be woken up for meals or left alone during the flight.

And once the formalities were out of the way, it was finally time to begin the flight. "All ground staff please disembark, this aircraft is bound for Dubai," the captain said.

The flight was decently full but I was lucky enough to have the middle seat next to me open. We ended up departing around a half-hour late because of the boarding delay.

I watched along on the cameras as we taxied out to the runway. The A380 is so massive that I didn't even notice when we started to push back.

Soon enough we were lined up on the runway and ready to fly. Our four-engine plane barreled down the runway and I was truly impressed that something so big was able to leave the ground.

Stunning views of New York City soon followed as we turned towards Europe and began our transatlantic trek halfway around the world.

The A380's windows aren't the largest and there's a good amount of room between the window covering and the actual window, limiting the field of vision. But that didn't stop this flight from seeing the Manhattan skyline one last time before ascending over New England.

The meal service began around an hour after takeoff, with flight attendants not really rushing as we had a long way to go before Dubai. Those that requested special meals were given them first before flight attendants began walking up the aisles with meal trolleys.

On offer for lunch was a choice between barbecue chicken and a vegetarian palak paneer, both served with chickpea salad, cheese and crackers, bread, and a triple chocolate delice.

I opted for the barbecue chicken and was delighted by the presentation, including the use of real silverware. There were no COVID-19 cutbacks in this meal.

All in all, it was one of the best meals I've ever had in economy class. I was pleased with every bite I took and flight attendants quickly came around to collect the trash.

Coffee and hot tea service followed each meal, with flight attendants coming around multiple times during the flight with cups of water, apple juice, and orange juice. The flight attendants were very proactive and it was truly great to see compared to some US carriers.

With 10 hours to go, I turned to the "ice" entertainment system to watch a movie. What seemed like thousands of hours of content including movies, television shows, games, podcasts, audiobooks, and live television.

I couldn't decide which movie to watch first, which is an admittedly good problem to have.

The music selection was also quite impressive with modern and classic hits. Later in the flight, I ended up making and listening to a playlist even though I had an iPhone pre-loaded with music.

The first three hours passed relatively quickly, then darkness engulfed the aircraft as we entered the skies above the North Atlantic Ocean. Only nine hours remained in the flight and I was trying my hardest to stay awake in order to somewhat sync up with Dubai time.

I kept track of the flight's progress by using the moving map. It wasn't before long that we reached Europe and this was the first time I'd stayed awake for an entire eastbound transatlantic crossing.

The unmistakable smell of pizza filled my nostrils and that meant it was time for the mid-flight snack. On the menu was the "Emirates pizza" described as a vegetarian pizza with tomatoes, melted cheese, and oregano, or as we call it in New York, pizza.

It’s a snack that I’ve had a few times on other airlines and it’s the perfect comfort food for a long flight. I actually really enjoyed the pizza, even though we were coming from the place that makes the best pizza in the world.

And that was followed by snacks including Twix and a snack mix.

With less than six hours to go, it was time to head to sleep in a bid to adjust to Dubai time. I ordered a glass of wine in an attempt to ease my sleep but it wasn't going to be easy given that it was only around 5:30 p.m. in New York.

My internal clock wouldn't let me sleep so I stayed up to get some work done ahead of a busy day in Dubai, with WiFi available for $26 for the entire flight. The final two hours of the flight were spent watching another movie and the sun rose just outside the window.

At around two hours until touchdown in Dubai, the cabin lights once again brightened with a pink hue indicating that it was time for breakfast. Flight attendants walked up the aisles for the last time during the flight to serve the final meal of the flight.

Options for the morning meal included scrambled eggs or chana masala, both served with fruit, yogurt, and a roll. I’m not a fan of breakfast foods, especially eggs, but opted for the scrambled eggs just to see what was on offer.

Flying to the Middle East always offers unique geographical opportunities, and this flight was no different. After flying over the Mediterranean Sea from the Greek coast, we made landfall over Israel and then proceeded to fly over Jordan and Saudi Arabia before Iran came into view just off of our wing.

The in-flight service finished with a cold towel offering, which was needed after such a long flight.

The UAE coastline eventually came into view and this 12-hour flight neared its final minutes.

It was quite a long flight but the comfort of the A380 combined with the great service and high-quality offering even in economy class made the time fly by.

Deplaning was the final hurdle, as it took some time to clear out the A380. But soon enough, I was out and about in Dubai.

Deal iconAn icon in the shape of a lightning bolt. 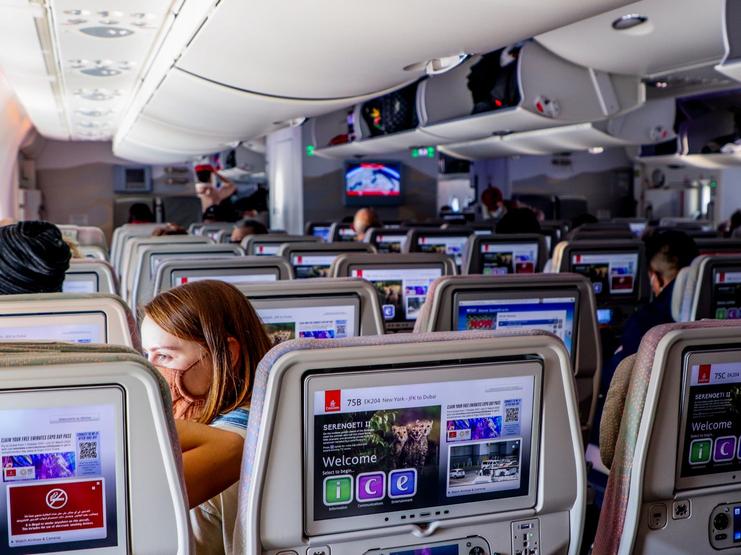