Her statement comes after Kejriwal held a press conference earlier in the day expressing disappointment at the postponement of municipal corporation elections in the national capital, stating that doing so "weakens the democratic system."

Taking a dig at Kejriwal, the Bharatiya Janata Party (BJP) leader said he "chooses to empty the Nagar Nigam treasury."

Also Read | Chennai Shocker: 22-Year-Old Man Dies by Suicide After Wife Breaks His Mobile for Speaking With Another Woman. 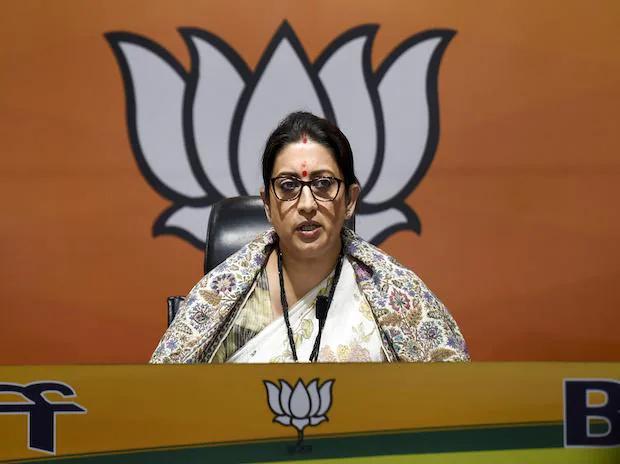 "He stopped funds for sanitation workers, even stopped fund flow for parks' maintenance in Delhi," she alleged.

Irani came down heavily on Kejriwal on his statement of an "AAP wave in Delhi" and said, "A leader who gets less votes than NOTA in Uttar Pradesh, lost deposit on 55/70 seats in Uttarakhand claims there's AAP wave."

Kejriwal, earlier in the day, had questioned the BJP of not unifying the three corporations of the MCD.

"People are questioning the move. Since seven-eight years, the BJP is in power at the Centre.If they wanted to unify the three MCDs, why didn't they do it? An hour before the announcement of the date of the MCD polls, they decided to unify them and thus delayed the polls. People are saying that this is just an excuse. BJP felt that it will drown in the AAP's wave in Delhi," the Delhi CM said.

Earlier, State Election Commissioner SK Srivastava said that the Centre has deferred the announcement of polling dates for the Municipal Corporation of Delhi (MCD) election after the central government raised a few issues that are yet to be legally examined by the Election Commission.

He also informed that the Centre was planning to introduce a bill in the budget session of Parliament to unify the three municipal corporations of Delhi.

"As central government raised few issues that are yet to be legally examined by us, we will not be able to announce MCD election dates as of now. We will take some more days. We have to conduct the elections before May 18," Srivastava said.

(This is an unedited and auto-generated story from Syndicated News feed, LatestLY Staff may not have modified or edited the content body)

Next: Top 10 smartphones with the highest megapixel selfie camera in India