The iPhone 12 combines the designs of the iPhone X and the legendary iPhone 4 and comes out looking and feeling fresh, with 5G, a better screen and improved cameras.

The iPhone 12 marks the biggest change to Apple’s smartphone line since the 2017 iPhone X and feels like a greatest hits from the firm’s design teams over the last decade.

It has the same all-screen design that shook things up for Apple in 2017 with the iPhone X but the flat aluminium sides look and feel like 2010’s iPhone 4 or the iPhone 5 from 2012. The combination feels fresh and is a significant upgrade on the design of last year’s iPhone 11.

Compared with its predecessor, the iPhone 12 has thinner bezels but the same-sized 6.1in screen, making it 4.2mm shorter and narrower, 1.3mm thinner and 32g lighter. Combined with the flatter sides and a grippy coating on the glass back, the iPhone 12 is much easier to hold and use one-handed.

The screen has been significantly upgraded, too, replacing the older LCD with newer OLED technology hitherto reserved for the “Pro” iPhone models. The display is brighter and more colourful, with significantly improved blacks and a higher pixel density making it crisper. It is one of the very best displays you can get on a smartphone, and has a new cover to it that Apple calls “Ceramic Shield”, which it says has four times the drop resistance of previous glass on iPhones. Anything that helps prevent smashed screens is a bonus.

The new iPhone still has the old Lightning port in the bottom, not the newer and universal USB-C port, and has Apple’s new MagSafe technology. The MagSafe system is a ring of magnets hidden in the back of the phone on to which accessories can snap into alignment, including the £39 MagSafe wireless charger, although you can still use any standard Qi-compatible wireless charger.

The iPhone 12 has the same A14 Bionic processor as used to great effect in the new iPad Air and the iPhone 12 Pro. It is an extremely powerful chip that runs rings around most of the competition and can handle anything you would demand of an iPhone, including graphically intensive gaming, and will continue to do so for years to come.

Everything is snappy and slick but it doesn’t feel night and day faster than last year’s iPhone 11 or the iPhone SE, although it will be a significant step up from older phones.

The iPhone 12 line is the first of Apple’s smartphones to have 5G. Performance was similar to the top Android smartphones, which have the same Qualcomm-made 5G modem, although indoor reception was slightly worse than the OnePlus 8T or Samsung Galaxy Z Fold 2. Note that only models sold in the US also support mmWave 5G on top of the more standard mid-band 5G used in the rest of the world.

Battery life was very good. The phone lasts about 40 hours between charges with the screen used for well over six hours in that time, which is longer than most similarly sized rivals. That means the phone made it from 7am on day one until 9pm on day two, spending four hours on 5G and the rest on wifi, while I used many different chat and social apps, various health apps, Safari, Gmail, OneNote, Google Maps, the Premier League app, six hours of Spotify over Bluetooth headphones, one hour of Netflix and shot about 20 photos.

It takes 25 minutes to charge the battery to 50% but more than 90 minutes for a full charge using a £19 Apple 20W USB-C charger – no power adapter is included in the box, just a USB-C to Lightning cable. Fully charging using Apple’s new MagSafe wireless charger takes more than three hours connected to the same 20W USB-C charger. 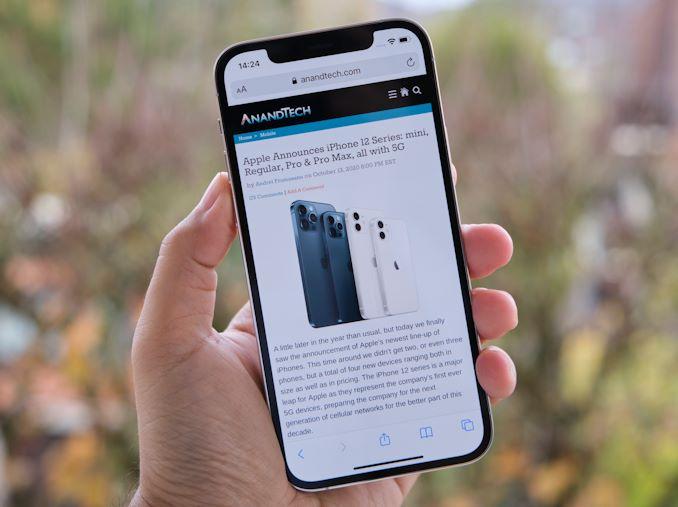 Apple does not provide an expected lifespan for the iPhone 12’s battery but it can be replaced for £69. The typical lifespan of a smartphone battery is at least 500 cycles while maintaining at least 80% capacity. Apple’s iOS also has a battery optimisation feature that prolongs its lifespan by stopping the battery sitting at 100% charge for a prolonged period overnight. The smartphone is generally repairable, with an out-of-warranty service costing £426.44, which includes the screen. The iPhone 12 was awarded six out of 10 for repairability by the specialist site iFixit.

The iPhone 12 uses 100% recycled tin in the solder of its main board, 99% recycled tungsten, 98% recycled rare earth elements and at least 35% recycled plastic in multiple other components. Apple is also using renewable energy for the final assembly of the machine, and breaks down the phone’s environmental impact in its report.

Apple also offers trade-in and free recycling schemes, including for non-Apple products. The iPhone 12 does not ship with a power adapter, just a USB-C to Lightning cable, nor headphones in the box, reducing its carbon footprint.

Released in September, iOS 14 introduced a visual overhaul that made previously full-screen functions such as Siri, calls and other bits more compact and streamline. But the big new addition is widgets to the home screen and the App Library, which allows you to delete an app from your home screen and have it sit in an automatically organised list on the right-most page of the launcher to remove clutter. Both new features operate very similarly to those on Android. It is the biggest visual change to the home screen in years but good widgets are few and far between.

New privacy tools around the sharing of location, activation of cameras and access of the clipboard are welcome additions. Apple’s Translate app has also been added, plus WhatsApp-like @ notifications in iMessage.

The main wide camera has a faster f1.6 lens, which lets in 27% more light for better low-light performance and less noise than its predecessor, but most of the improvements come in the software. Apple’s night mode can now be used on all three cameras, which significantly improves low-light ultrawide and selfie shots. The new Smart HDR 3 system also improves dynamic range in photos, particularly for landscapes mixing the sky with land in shade.

Overall, the still camera on the iPhone 12 makes a small but meaningful improvement over the iPhone 11, with noticeably better detail and less noise in middling to poor light. It is still one of the very best point-and-shoot cameras on the market, keeping up to par with rivals such as Google’s Pixel 5, but the lack of a telephoto camera is disappointing.

One area where the iPhone 12 is very much ahead of the pack is in video; capturing better, smoother and more adaptable video even in lower light levels than most rivals, including the addition of Dolby Vision HDR recording in 4K, if you want to start making more than home movies.

The iPhone 12 marks a significant design improvement on the last three years of iPhones.

Like a skilful remix of the good bits of a decade of iPhones, the iPhone 12 harks back to the stellar design of the iPhone 4 while keeping the all-screen front, Face ID and excellent gesture system of the iPhone X.

It is lighter, thinner and narrower, which makes holding and using it with one hand a lot easier, while its 6.1in screen is a significant improvement compared with its predecessors. Battery life is long, performance is strong and the iPhone is more durable while including more recycled materials. The iPhone 12 is also more future-proofed with 5G – just don’t buy it just for that right now.

The camera is very good, too, but doesn’t push the envelope and doesn’t have any optical zoom. The phone is also £70 more than its predecessor on launch and still only comes with a base storage of 64GB, compared with 128GB for most competitors.

It is expensive but the iPhone 12 feels fresh and ready to last the next five years. It is the best iPhone since the iPhone X.

Cons: no USB-C, need your own charger, no telephoto camera, base model only 64GB storage, more expensive.

Next: Global smartphone shipments sink by 6% due to supply constraints