Apple's latest reshuffling of the iPhone lineup means an iPhone SE (2022) vs. iPhone 13 comparison is especially relevant. If you're debating which of the best iPhones to buy, you'll likely notice that both of these phones sport the same processor. That means you can expect comparable performance no matter which model you get.

That's a big mark in favor of the newly announced iPhone SE (2022). After all, this follow-up to the iPhone SE from 2020 still costs hundreds of dollars less than Apple's flagship phone, even with a slight bump in price. For less than $450, you can get an iPhone with the latest processor plus 5G compatibility. What's not to like?

Apple takes two very different approaches when it comes to the design of the iPhone 13 and iPhone SE (2022). The former phone features Apple's very latest design, with a notched display that otherwise stretches from one end of the handset to the other. Meanwhile, the iPhone SE (2022) turns back to the days of the iPhone 8. There's no notch, but the phone does feature some prominent bezels at both the top and bottom of the display.

That also means the iPhone SE has space for a fingerprint sensor, allowing Apple's new phone to feature Touch ID support. The iPhone 13 has no such capability, relying entirely on Face ID to unlock your phone and verify mobile payments. That was a flaw back in the days when we were wearing face masks all the time, but iOS 15.4 is improving Face ID to recognize your face when you're wearing a mask. So Touch ID won't be as big an advantage for the iPhone SE as it might have been at this time last year.

In terms of materials, the iPhone SE and iPhone 13 use the same glass and aluminum build. Neither phone offers a headphone jack, and both support wireless charging. Only the iPhone 13 has the magnets to support MagSafe connectivity, though.

Besides the lack of a notch on the iPhone SE (2022), the biggest noticeable difference between these two phones lies in the size of their screens. The iPhone SE sports a 4.7-inch panel, the smallest display you can get on an iPhone — the iPhone 13 mini has a 5.4-inch screen — which will make this an appealing option for fans of the best small phones. The iPhone 13 is positively gargantuan in comparison, with a 6.1-inch display.

It's not just the size of the screens that differs, though. Apple switched to OLED panels with the iPhone 12 family, so the iPhone 13 continues to use OLED for its screen. The iPhone SE (2022) features an LCD panel, which means that blacks will be blacker and contrasts better on the iPhone 13. 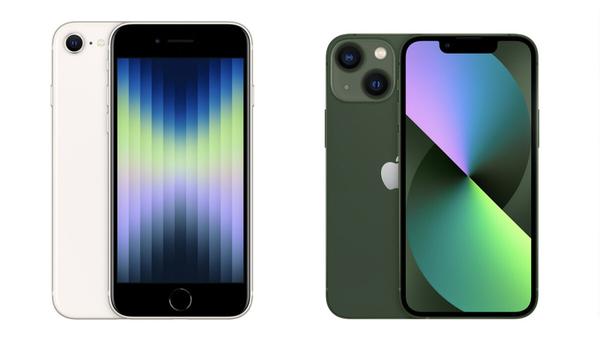 Both screens refresh at a 60Hz rate, though. Apple reserves fast-refreshing displays for its Pro phones.

There's another missing feature with the iPhone SE (2022), but it's not visible to the naked eye. There's no Night mode support on the new phone — a rather important omission given that other phones in the SE's price range offer that capability. So does the iPhone 13, so if you like taking photos in low light, the iPhone SE (2022) shouldn't be your first choice.

That said, the processing power Apple includes with the iPhone SE — more on that in a moment — supports other computational photography features that help iPhones rank among the best camera phones. The iPhone SE supports Smart HDR 4 for better results in challenging lighting as well as Deep Fusion for calling out details in shots. The Photographic Styles feature Apple introduced with the iPhone 13 — think of these as real-time filters — also appears on the iPhone SE (2022).

Up front, the iPhone 13's 12MP TrueDepth camera has better resolution than the 7MP front camera on the iPhone SE. That likely means sharper video chats if you're using the iPhone 13.

When Apple releases a new iPhone SE model, it typically uses the same chipset that powered the flagship phones arriving the previous fall. For the iPhone SE (2022), that means the same A15 Bionic silicon featured in the iPhone 13. For that reason, we don't expect to see a big performance gap, when we benchmark the new iPhone.

Both phones offer 5G connectivity — a new development for the iPhone SE. However, Verizon customers should note that the iPhone SE (2022) does not support mmWave-based 5G. While Verizon is rolling out high-speed C-Band 5G to more areas, its early 5G efforts were centered around mmWave. According to other reports, the iPhone SE (2022) also won't work with AT&T's upcoming 3.45GHz 5G spectrum. iPhone 13 owners don't have to worry about these caveats.

Still, Apple is promising improved battery life for the iPhone SE (2022) when compared to the 2020 model. That's good since that iPhone turned in a below-average time on our battery test. Apple has a good track record of boosting battery performance on recent models as the iPhone 13 saw its battery life jump to 10 hours and 33 minutes on our test — a 2-hour improvement from the iPhone 12's time.

The iPhone SE (2022) supports 20W charging, the same speed as the iPhone 13. Neither phone ships with a charger, though.

Besides performance, here's an area where the iPhone SE and the iPhone 13 should be pretty evenly matched. That's because both phones run iOS 15 — the iPhone SE is shipping with iOS 15.4, in fact, which iPhone 13 users will be able to upgrade to this week.

That means the same features iPhone 13 users enjoy will be available to iPhone SE (2022) owners, especially since both phones feature that A15 Bionic processor. One exception will be the Cinematic mode capabilities enjoyed by iPhone 13 users, as that shifting focus feature likely requires a second camera lens.

The identical chipset in both phones also means that the iPhone SE is likely to remain supported by Apple for however long the iPhone 13 receives software updates. Typically, that's been for about five years, though it's worth noting that the original iPhone SE released in 2016 is still able to run Apple's latest iPhone software.

We're still testing the latest iPhone, which makes it hard to give a definitive iPhone SE (2022) vs. iPhone 13 verdict. Still, deciding which iPhone is right for you depends on your budget and just how important mobile photography is to you.

If you balk at spending big bucks on a phone, the iPhone SE (2022) is your ideal Apple handset. You won't find a cheaper model in Apple's lineup. And you don't have to sacrifice performance or 5G connectivity to get the low price tag. The phone will also appeal to anyone who likes their handsets compact.

But the iPhone 13 with its two rear cameras is going to be a better camera phone option. We'd also assume it has a longer battery life and its 6.1-inch display is not only larger but likely of better quality. All those factors tilt the scale toward the iPhone 13, but the iPhone SE's low cost gives it a definite appeal.

Prev: Reliance in talks with Flex, Karbonn phone makers for JioPhone Next