The OnePlus 7T, the latest addition to the OnePlus range,packs the most recent and powerful hardware into a gorgeous design for under $600, making it a phone that’s truly worthy of a place in your pocket. It. It’s a phenomenal deal, and despite the fact we’re expecting a OnePlus 7T Pro as well, it’s clear the OnePlus 7T hasn’t lost its mojo.

But which of these two phones is the better one for you? Has the flagship killer lost its edge, or will OnePlus claim yet another victory? We put the two phones to the test to find out.

Both of these phones have an excess of power that delivers super-smooth performance, but one is definitely stronger than the other. The Note 10 is packing the Qualcomm Snapdragon 855, but it’s the OnePlus 7T’s Snapdragon 855 Plus that gives it the edge here. The 855 Plus promises more power than the standard 855, and it absolutely delivers on that, with the OnePlus 7T’s benchmarks surpassing the Note 10’s fairly easily. But will you notice a difference in real-life use? Unlikely.

Can battery performance break the deadlock? The OnePlus 7T has the larger battery of the two, but the two phones seem to give similar performance, with around 20% left at the end of a long day. The OnePlus 7T is absolutely the faster charger though — it charged from 17% to full in just 50 minutes. The same task took the Note 10 over an hour — but the Note 10 does have the advantage of wireless charging, which OnePlus continues to shun.

With so much being even here, we’re forced to give this category to the phone with the more powerful processor.

Make no mistake about it, the Galaxy Note 10 is one of the best-looking phones Samsung has ever made. The punch-hole display and bezel-less design give it a sleek look from the front, while the rear panel is absolutely stunning when sporting the rainbow-spectrum Aura Glow finish. The OnePlus 7T is a good-looking phone, but there are some design choices that may detract from its beauty for some. While the teardrop notch on the front is sleek, the circular camera module is an odd addition, and adds a significant bump on the back. It’ll divide opinion for sure.

Still, the 7T feels great to hold, which is good, because you won’t want to drop it. Like the Note 10, the OnePlus 7T is made of glass that could shatter if you drop it, so you’ll want to keep it protected with a case. The Note 10 has more protection against water though, thanks to its IP68-rating. The OnePlus 7T has no official water-resistance rating, so keep a steady grip on it around the pool.

The Note 10 is the prettier and better protected of the two phones, so it takes the win here. 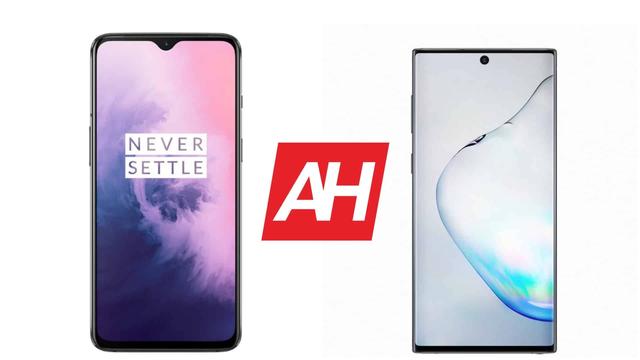 The display is one of the most crucial features on a phone, so you want to be sure you’re getting a good one. Samsung’s Dynamic AMOLED displays are probably the best in the world right now, and the Note 10’s 6.3-inch display outputs vivid colors and super-strong blacks. It’s an exceptional display, and the OnePlus 7T’s 6.55-inch Fluid AMOLED struggles to match it. It’s good, but it just can’t match the Note 10 — except in one key area.

Like the OnePlus 7 Pro, the 7T’s display uses a 90Hz refresh rate. That means it refreshes more often than the Note 10’s 60Hz display, and this faster refresh rate absolutely makes a difference. Actions feel snappier and scrolling is much smoother. It’s a game-changer, and something that should heavily inform your decision. It’s enough that we award the OnePlus 7T the win here.

The Note 10 has three lenses on the back and a single selfie lens on the front. The rear camera module consists of a main 12-megapixel lens with a variable aperture, a 12-megapixel telephoto lens, and a 16-megapixel ultrawide-angle lens, while the front-facing selfie camera is a 10-megapixel lens. While it lacks the time-of-flight sensor from the Note 10 Plus, it’s still a great camera and it takes some excellent shots. It particularly excels in video recording too, thanks to Samsung’s additions.

Like the Note 10, the OnePlus 7T packs four lenses. There’s three on the back — a 48-megapixel main lens, a 12-megapixel telephoto lens, and a 16-megapixel ultrawide-angle lens. There’s a 16-megapixel lens around the front. We haven’t had much time with it yet, but it’s off to a strong start ,with the macro mode being particularly worthy of mention. However, the camera app is something of a confusing mess, and needs a bit of time to get used to.

It’s hard to judge this before the OnePlus 7T has really been put through its paces — but traditionally, the Note has always been the stronger of the two, and we’ve seen nothing yet to say the OnePlus 7T will buck that trend.

The OnePlus 7T is the first OnePlus phone to be released with Android 10, which is hidden under OxygenOS 10.0. Unlike many other manufacturer skins, OxygenOS is a simple affair, and it’s easy to use if you’re used to stock Android. By contrast, Samsung’s One UI has many more alterations, though that’s not a bad thing. One UI is an excellent manufacturer skin, though it could be a small shock for anyone used to stock Android.

The Note 10’s One UI is running over Android 9.0 Pie, and that’s the biggest difference here. OnePlus has already adopted the latest version of Android, but it’s not likely we’ll be seeing a final Android 10 release on a Samsung phone until 2020. OnePlus is one of the fastest manufacturers at updating its phones, and Samsung can’t match it there. It wins OnePlus this round.

The OnePlus 7T has a handful of decent special features to its name, including the attention-focusing Zen mode, a dedicated gaming mode, and an in-display fingerprint scanner and facial-recognition tech. But it can’t compete with the huge number of special features on the Galaxy Note 10. Samsung’s biggest new phone comes with Link to Windows integrations, an enhanced Dex desktop mode, AR Doodle and AR Emojis, Air Gestures, and the Note 10’s headlining S Pen.

While some of the features are absolutely niche, you’re sure to find some that work for you. The Note 10 wins thanks to sheer numbers.

The Samsung Galaxy Note 10 is currently available, and it’ll set you back $950 for the 128GB model. The OnePlus 7T is, as expected, a lot cheaper. When it releases on October 18, you’ll be able to pick it up for just $599. Both phones will work on every major U.S. carrier, though OnePlus has no official support for Sprint’s network.

Counting the wins, it’s clear that this is a tough battle — but we’re awarding the win to the OnePlus 7T.

It’s a powerful statement in the $599 OnePlus 7T‘s favor that it’s able to go toe-to-toe with the $950 Samsung Galaxy Note 10. When choosing between these two phones, it’s going to be hard to ignore the phone that offers almost the same level of power, polish, and performance for several hundred dollars less. That’s why we’ve awarded the OnePlus 7T the win. But there’s more to buying a phone than sheer value. If you’re a Note-lover, or you crave the S Pen’s handy features, then don’t be afraid to spend more for the Note 10, For everyone else, the OnePlus 7T is the better choice.

Next: OnePlus is falling behind and the Nord 2 proves it