Edinburgh spoiled Scarlets' first game in front of fans for 16 months by battling back for a dramatic draw in the Pro14 Rainbow Cup.

Two tries for Kieran Hardy and scores for Tom Rogers and Dafydd Hughes looked set to seal a home win.

But after earlier tries from Marshall Sykes and Jamie Ritchie, Edinburgh responded with 14 points in the final five minutes of the game.

Jack Blain and Boan Venter claimed the tries to level the scores.

Around 1,000 fans witnessed the game in searing sunshine at Parc y Scarlets. It was the last fixture of the domestic season for Welsh regions and the first where a crowd was present after Welsh government restrictions had been relaxed.

Stadium regulations and remaining restrictions allowed Scarlets to make 1,300 tickets available in a 14,500 capacity, with three of the four stands used.

It was a chance for the supporters to say farewell to departing trio Pieter Scholtz, Jac Morgan and Uzair Cassiem, who were starting in their final game before leaving the region.

Full-back Kyle Rowe impressed in the opening exchanges of his first Edinburgh appearance.

It was opposite number and new Wales squad member Rogers who made the first telling contribution with a half break and inside pass for scrum-half Hardy.

Rogers was utilised at full-back after being previously involved on the wing and will give Wayne Pivac both options this summer following this man-of-the-match performance. 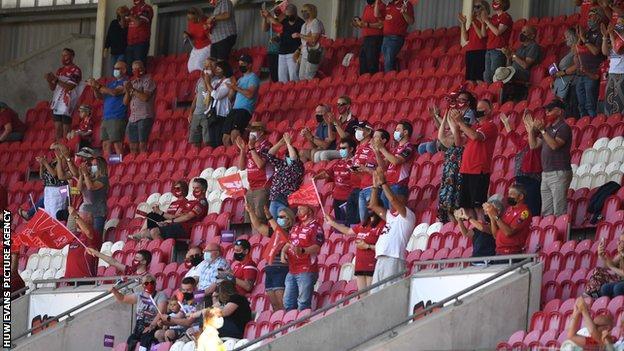 Hardy turned provider for Rogers for Scarlets' second try with the scrum-half taking a quick tap penalty and releasing the supporting full-back to score as the hosts led 14-7 at half-time.

Rogers was heavily involved just after the break with a break that almost led to a try for Ryan Conbeer but Blade Thomson's final pass was forward.

Scarlets supporters welcomed back Wales prop Samson Lee, who came on as a replacement for his first game in seven months after recovering from concussion.

Second-row Morgan Jones was yellow-carded for a shoulder charge in a ruck on Edinburgh flanker Connor Boyle.

The visitors made their numerical advantage tell as captain Ritchie burrowed over. Ritchie then limped off, which will be a concern for Scotland with the back-rower due to captain his country this summer with Stuart Hogg away on the British and Irish Lions tour of South Africa.

Edinburgh wing Blain was shown a yellow card for taking out opposite number Steff Evans in the air.

Scarlets took advantage with a second try for Hardy after clever interlinking between Evans, Cassiem and Thomson with Edinburgh also losing a captain's challenge.

Blain made an immediate impression on his return with a fine individual effort before replacement prop Boan Venter crossed under the posts. Nathan Chamberlain slotted over the easy conversion to level the scores.

Next: OnePlus Nord CE 2 Lite design revealed in a big leak, price in India likely to be under Rs 20,000