Chinese smartphone maker Realme on Thursday launched in India the Narzo 50. The smartphone boasts a screen of 120Hz refresh rate, 50-megapixel-based triple camera set-up, 5,000mAh battery, and 33W fast charging. The phone will be available in 4GB+64GB and 6GB+128GB configurations, priced at Rs 12,999 INR 15,499, respectively. It will be available in speed black and speed blue colours from March 3 on Amazon India, Realme online portal, and select retail stores. 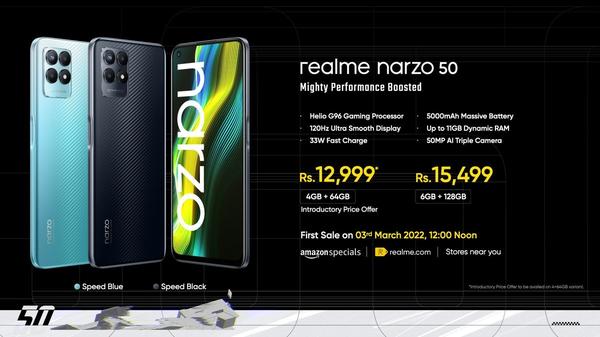 “Following up on our goal to bring the best in class combination of power, performance, and fun for young players, we have introduced realme narzo 50. With this new smartphone, users can experience thrilling gaming sessions owing to MediaTek Helio G96 Processor, the best processor in the segment. With the launch of this new addition, we are delighted to announce our partnership with Amazon for the sale of this product. This new collaboration will help us reach a wider audience and will further strengthen realme's position in the online sales market,” said Madhav Sheth, CEO realme India, VP, realme, and President, realme International Business Group.

Touted as a gaming-centric smartphone, the Realme Narzo 50 is powered by MediaTek Helio G96 system-on-chip paired with up to 6GB RAM and 128GB on-board storage. The budget smartphone features Realme’s Dynamic RAM Expansion technology, which extends the available RAM capacity by using a portion of on-board storage as virtual RAM. According to Realme, this feature will fasten the speed of running games and programs on the smartphone.

The Reame Narzo 50 sports a 6.6-inch fullHD+ screen of 120Hz adaptive refresh rate and 180Hz touch sampling rate. It packs a 5,000mAh battery, supported by 33W Dart Charge technology for fast charging. Imaging is covered by triple camera set-up on the back, featuring a 50MP primary sensor of an f/1.8 aperture, a macro lens, and a mono lens.

Prev: OPPO to launch A76 on April 13 in Bangladeshi market

Next: Realme V25 to be launched on March 3 will sport a colour changing back