During Samsung’s Galaxy Unpacked 2022 event on February 9, the company announced its flagship Galaxy S22, while simultaneously dropping an enticing trio of tablets as part of the Galaxy Tab S8 ecosystem. The Galaxy Tab S8, S8 Plus, and S8 Ultra are Samsung’s follow-up to the 2020 Galaxy Tab S7, albeit a bit delayed as supply chain issues were exacerbated by the COVID-19 pandemic.

As with all of Samsung’s newly announced products, we’ve got all the details on the Tab S8, from specs to design and pricing. Samsung hasn’t shaken up its formula all that much, but it is making one big change — and we do mean big.

As with the Galaxy Tab S7 that was released in 2020, Samsung is releasing multiple models of the Galaxy Tab S8. Where the Tab S7 had two models, the Tab S8 is embracing the same scheme as the current line of Galaxy S22 phones. This means there is a regular Tab S8, a slightly larger Tab S8 Plus, and a souped-up Tab S8 Ultra with all the bells and whistles you can think of.

Samsung’s Tab series hasn’t had a consistent lineup of devices in a while, with the Tab S5 launching with only an E model and the Tab S6 having a Lite model. The Tab S7 was actually the first to launch as a pair of devices, and now the Tab S8 is expanding that to three. Adding an Ultra model is clearly intended to lure away would-be iPad Pro owners. That makes sense when one considers how Samsung’s other flagship phones are branded. Samsung’s already doing the whole Fan Edition thing for their budget tablets and phones, so why not add a top-end tablet as well?

It’s evident that the Galaxy Tab S8 and Tab S8 Plus look very similar to the Galaxy Tab S7. It’s an elegant design that worked, so why fix what isn’t broken? The biggest change here comes with the massive Galaxy Tab S8 Ultra, which features a 14.6-inch screen and makes the controversial choice of adopting the notch that Apple has been implementing on its entire product lineup, starting with the launch of the iPhone X and continuing to the latest MacBook Pro. 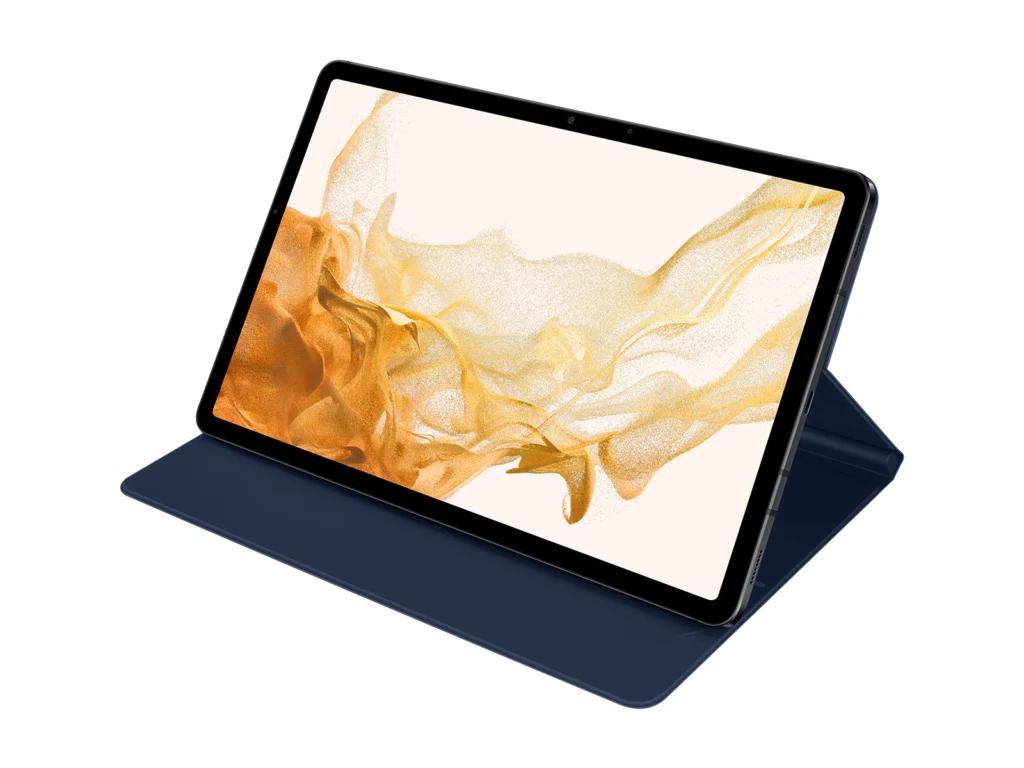 The company previously dinged Apple over its use of the notch, instead focusing on its Infinity branded displays that had hole punches. With the S8 Ultra, Samsung is going the Apple way and adopting the notch on its large-screen device to accommodate the front-facing dual camera sensors. This isn’t the first time Samsung mocked Apple for a controversial change it then adopted shortly later. It’s become standard practice, from eliminating headphone jacks on phones to ditching the charger in the box.

High-end specs are par for the course for Samsung’s S series phones, and the S8 tablets are no different. The Samsung Galaxy Unpacked February 2022 event has shown us a highly capable set of tablets.

Leading the charge are the Galaxy Tab S8 and Tab S8 Plus. Both are competent devices with an 11-inch model for the Tab S8 and a 12.4-inch display for the Tab S8 Plus. The Tab S8 won’t have a Super AMOLED display like the Tab S8 Plus and Ultra, however, all three tablets will sport the now premium 120Hz refresh rate. Inside, the 4nm Snapdragon 8 Gen 1 is paired with 8GB RAM and 128GB/256GB of storage to power it all.

Befitting its name, the Galaxy Tab S8 Ultra is a behemoth of a tablet. It is a whopping 14.6-inch tablet with a 2960 x 1848 resolution. The same Snapdragon 8 Gen 1 that powers the others is powering this one too, but the RAM goes up to 16GB and the storage to 512GB in the top configuration. Samsung appears to be tackling both Surface Pro and iPad Pro users with this one, with an argument to be made that the larger screen could even extend this into a MacBook Air competitor. Of course, regardless of the model, expandable storage will allow for up to 1TB of space with a microSD card.

While cameras on tablets are rarely a draw, Samsung is putting the camera of the Tab S8 Ultra front and center with its notch. It has a pair of front-facing cameras — 12-megapixel main and 12MP ultrawide — for improved video calls. The Tab S8 and Tab S8 Plus simply have a singular 12MP front camera. All are equal in the rear, with a 13MP main and a 6MP ultrawide. Recording will be 4K across all models.

Other odds and ends include solid battery capacity, with the Tab S8 Ultra again leading the pack with an 11,200mAh capacity battery while the S8 and S8 Plus come with 8,000mAh and 10,090mAh respectively. All models support superfast charging at 45W. A 5G-enabled option is available, the S Pen makes its return, and Samsung is including Dolby Atmos-ready speakers as it habitually does.

The Galaxy Tab S8 family is available for pre-order as of today. Samsung’s premium tablets have always commanded premium pricing, and the Tab S8 is no exception. For the base Tab S8, Samsung is setting the price floor at $700, with the Galaxy Tab S8+ starting at $900. The Tab S8 Ultra is the top of the pack with a starting price of $1,100 and just one color option: Graphite. The Tab S8 and S8 Plus will, surprisingly, be available in graphite, silver, and pink gold.

If you’re interested in collecting or checking out other new devices in the Galaxy ecosystem, our article on everything you need to know about the Galaxy S22 will point you in the right direction.

Stay informed with the upcoming release, click the Add to Calendar button below to add this event to your personal calendar.

Next: Galaxy Tab S8+ vs Tab S7+: Faster chipset in a stronger body and more - SamMobile