Samsung’s new Galaxy S22 series may have grabbed most of the attention, but at the same Unpacked event, the South Korean tech giant also launched a trio of new tablets, including an “Ultra” model that is one of the largest tablets in the industry and blurs the line between tablet and laptop more than ever. If you’re on the market for a machine for both work and play, you owe it to yourself to check out Samsung’s Galaxy Tab S8 series offerings before just defaulting to the iPad. Let’s break down the three models and see if one of these fits your needs.

Get the Galaxy Tab S8 if:

Get the Galaxy Tab S8 Plus if:

Get the Galaxy Tab S8 Ultra if:

The Samsung Galaxy Tab S8, Tab S8 Plus, and Tab S8 Ultra are available for pre-order now and start shipping on February 25. The prices are: 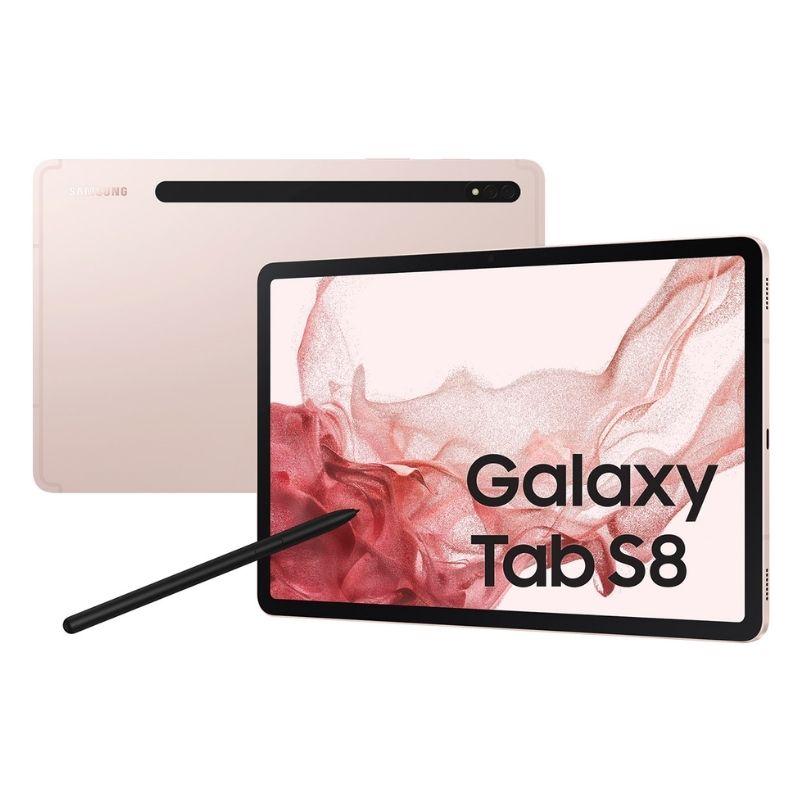 There are several deals that could lower the cost of these tablets. For example, XDA readers can get an additional $50 credit in the Samsung Store if you also reserve a Galaxy S22 phone. Check out our list of deals for the latest prices and offers on the Galaxy Tab S8 series.

All three Galaxy Tab S8 look very much like how you’d expect a tablet to look — it’s got an aluminum casing with a screen on the front, wrapped by bezels that are thin by tablet standards but thick by smartphone standards. There are many components that are identical across all three tablets: they all run on Snapdragon 8 Gen 1; have the same rear-facing camera system; same quad-speaker system that’s Dolby Atmos-certified; same software; same S-Pen (included with tablet); and same connectivity.

As for differences between the three tablets, obviously, there’s size: they each have different screen sizes ( 11-inch, 12.4-inch, 14.6-inch) so this means different dimensions and weight. While all three screens refresh at 120Hz, the 11-inch Galaxy Tab S8’s panel is an LCD panel, while the other two uses Samsung’s “Super AMOLED” (aka OLED). Because of the LCD, the Galaxy Tab S8 also has a fingerprint scanner built into the power button on the side, while the other two AMOLED tablets have an in-display fingerprint sensor.

The Ultra model’s display is interrupted by a slight notch. While it doesn’t dig into the screen as much as an iPhone notch, it’s still unsightly. The reason for its existence is the Galaxy Tab S8 Ultra packs dual front-facing cameras, including an ultra-wide. The Galaxy Tab S8 and Tab S8 Plus only feature a single webcam.

The Galaxy Tab S8 Ultra has a notch.

Samsung is releasing official keyboard cover cases for all three tablets, and while these are completely optional purchases, for the Ultra it almost seems like a must. That’s because the Ultra, weighing 726g (that’s over 1.6lbs) and measuring 326mm wide, is too big to be used as a handheld tablet regularly for most people.

These keyboard cases, which Samsung calls “Book Cover Keyboard,” is actually a two-piece case: the backside with a kickstand and a front flap with keyboard and trackpad. The keyboard is well-built, with spacious keys that offer a decent amount of travel. Samsung’s UI is also well optimized for a trackpad — it supports multi-finger swipe gestures.

The Galaxy Tab S8 series packs relatively sizable batteries, and all can be topped up at 45W speeds. The vanilla Galaxy Tab S8 packs an 8,000 mAh battery, Galaxy Tab S8 Plus has a 10,090 mAh, and the Ultra model packs an 11,200 mAh cell. Samsung promises all-day battery life for all three devices, but we will have to put these to the test.

All three models come in WiFi-only and WiFi+Cellular variants, but the specific availability and the cellular tech vary across regions. For instance, some parts of Europe can opt for both WiFi-only and WiFi+5G variants of all three tablets. While regions like the US do not get 5G on the tablet, just 4G LTE, and that too, just on the middle Galaxy Tab S8 Plus. This isn’t an inherent difference between the three tablets, but something you will have to keep an eye out for depending on the region as cellular connectivity tablets have their own niche.

When it comes to Android tablets, there’s been a general consensus among tech media: they’re not great to use, especially compared to iPad. The problem was never hardware, as companies like Samsung, Huawei and Xiaomi have always been able to make great hardware. The issue was software: most Android apps are designed for portrait screens and do not play nice with widescreen landscape orientations. It’s sort of a chicken-or-egg problem: app developers don’t bother optimizing apps for Android tablets because the tablet industry is dominated by iPads, but people who want to use Android tablets are turned off by the poor app experience.

Samsung understood it can’t rely on Google to fix this problem, so it built its own solution in DeX mode. This essentially turns a mobile Samsung UI into something resembling a Windows UI, with a taskbar at the bottom of the screen and apps that open in resizable windows.This significantly improves the tablet experience on Android, because apps that refuse to open in landscape orientation can still open in their native portrait form inside DeX. Likewise, having floating windows significantly improves multi-tasking, because Android’s split-screen multitasking, while great for smartphones, often looks comically large on tablets.

DeX mode needs to be turned on, if you leave it off, then the Galaxy Tab S8 series behaves like a giant-sized Android phone, particularly, a Samsung one, running One UI 4.1 over Android 12.

The Galaxy Tab S8 series is highly versatile, since it can be used like a giant-sized smartphone or a desktop like computer, and both UI supports the S-Pen stylus. Whether it’s sketching, jotting notes, or making precise cuts in photo editing apps, the stylus just comes in handy. And best of all, it’s included with the Galaxy Tab S8 instead of being an additional purchase.

Samsung Galaxy Tab S8 series: Which one is for you?

The middle child Galaxy Tab S8 Plus is probably the best option for most people, as its 12.4-inch screen is large enough for excellent media consumption and productivity work, but also not so huge (like the Ultra) that it’d be a hassle to carry with one hand all over your house. The base model Galaxy Tab S8 is a solid option for those who want to save a bit of money or want the most portability, but its LCD panel is a clear step below the OLED screens of the other two.

The Galaxy Tab S8 Ultra, meanwhile, is the overkill machine just like its “Ultra” phone counterpart. This is a tablet you’d want to buy if you know you will use it on a desk, doing proper computer stuff often.

Either way, these are very likely going to be the best Android tablets of the year — it’s not just that Samsung makes the best screens, or that these devices run on Snapdragon 8 Gen 1. It’s DeX mode. It’s a game-changer for Android tablets. In fact, DeX mode, when it’s working well as intended, is even better than the iPad Pro in multi-tasking. Now if only app developers would finally pay more attention to Android tablets instead of just building everything for iPadOS.

Next: Patented molecules that counteract the effect of the most common anticoagulant drug