Both Samsung and Apple have announced new, quite powerful tablets recently. We’re here to compare them, the Samsung Galaxy Tab S8 vs Apple iPad Air (2022). Samsung’s tablet arrived at the beginning of February, along with two of its siblings. The Apple iPad Air (2022) landed a couple of days ago (at the time of writing this article). These two tablets are a bit different, which is why comparing them will be quite interesting.

The two tablets come with different aspect ratios, while there’s also the stylus factor to consider here. Their internals are also quite different, not to mention their software offerings. Android tablets haven’t exactly been especially powerful for years now, and Samsung will try to change that moving forward. Let’s kick off the Samsung Galaxy Tab S8 vs Apple iPad Air (2022) comparison.

Both of these tablets combine glass and metal for their build, though mostly metal, as in both cases the backplate is also covered by metal. That makes them feel quite premium in the hand, but also quite slippery at the same time. Considering these are tablets we’re talking about, they’re much easier to handle despite these materials, as you’ll be using them with two hands either way.

Both tablets have rather thin bezels around, but thick enough so you can grip them properly. Neither of them includes a display camera hole or notch, so you have the entire display to work with. The Galaxy Tab S8 is a bit taller, and quite a bit narrower than the iPad Air (2022). The two devices do offer different aspect ratios, so that is to be expected. Their display sizes are almost the same, though. 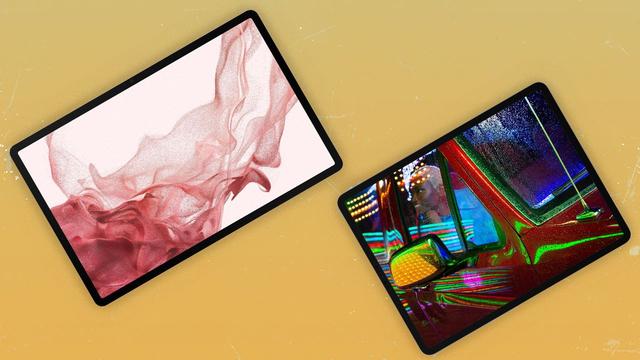 Another thing to note is that the Galaxy Tab S8 ships with an S Pen stylus. The iPad Air (2022) does support the Apple Pencil, but it does not ship with one, you’ll need to get one separately if you want to use it.

The Galaxy Tab S8 features an 11-inch 2560 x 1600 display. This is a TFT display, while its siblings do offer AMOLED panels. We’re looking at a 16:10 aspect ratio here, and this is a 120Hz panel, by the way. The display on Samsung’s tablet is protected by the Gorilla Glass 5. This tablet offers a screen-to-body ratio of around 83-percent.

Apple does a great job with animations and display optimizations, so not many people will complain about the refresh rate. It will be noticeable if you’ve used a tablet with a 120Hz refresh rate, though, of course, at least for some of you. That being said, these two displays are excellent. Both are quite responsive, while they’re very vivid, and more than sharp enough. The colors are punchy, and you won’t really have major complaints on either one, despite the refresh rate gap.

Both tablets are quite powerful, but the iPad Air (2022) comes with a more powerful SoC. It is fueled by the Apple M1 chip, which the company actually uses in its macOS devices as well. The Galaxy Tab S8 comes with the Snapdragon 8 Gen 1 SoC, Qualcomm’s most powerful processor to date. So, chances are that both of these tablets will be able to handle anything you throw at them, from the processing point of view.

They are also equipped with more than enough RAM. The Galaxy Tab S8 comes in both 8GB and 12GB RAM variants, while the iPad Air (2022) packs in 8GB of RAM. Android 12 comes pre-installed on the Galaxy Tab S8, along with One UI 4.1. iPadOS 15.3 is included on the iPad Air (2022). Apple’s tablet OS is still considered to be better for tablets these days, with better apps on offer. That may change down the line with Android 12L, we’ll see.

That being said, both of these tablets are really fast when it comes to performance. Regardless of whether you’re browsing the web, watching your favorite TV show, listening to music, or processing some images, you’ll be good to go. Both devices also do a great job when it comes to multitasking, and gaming. Both can run pretty much any game made for their respective OS’ without a problem.

The Galaxy Tab S8 features an 8,000mAh battery on the inside. The iPad Air (2022) includes a 28.6Wh battery. Apple didn’t share its capacity in mAh, and we can’t calculate it due to a lack of voltage information. Let’s assume that the battery sizes are comparable. Apple claims that you’ll get “up to 10 hours” of active use with this tablet. Samsung, on the other hand, didn’t exactly share their predictions for the Galaxy Tab S8.

The Galaxy Tab S8 supports 45W fast wired charging. You can get it changed up to 100-percent in 80 minutes. Apple didn’t announce max charging speed for the iPad Air (2022), or any info regarding that. Chances are its charging is slower, though.

As a rule of thumb, taking pictures with tablets is not recommended. Smartphones usually have better cameras, especially when we talk about high-end devices. These two tablets do offer better cameras than most other tablets in the market, though. So, if you really want to take pictures with them, you’ll be good to go. Don’t expect to get great results, as you would with smartphones, though.

The Galaxy Tab S8 has two cameras on the back, a 13-megapixel wide-angle unit, and a 6-megapixel ultrawide camera. The iPad Air (2022) includes a single 12-megapixel camera back there. On the front. Both feature ultrawide 12-megapixel cameras with an f/2.4 aperture lenses. Those front-facing cameras are really good on both devices, and you’ll enjoy using them for video calls, that’s for sure. They’re also more than wide enough.

When it comes to audio, you’ll be glad to know that neither device has a single speaker. The Galaxy Tab S8 actually packs in four speakers, while the iPad Air (2022) includes two of them. The sound output is really good on both devices, but the Galaxy Tab S8 does take the cake here. Its speakers have been tuned by AKG, and the sound is fuller, though not by much. The vast majority of people won’t be able to tell the difference, and will be more than happy with either of these. The speakers are also well-positioned, so both tablets are really good for consuming multimedia.