The more cameras, the merrier - this seems to be the pitch of the Vivo V17 Pro smartphone, which has a total of six cameras.

But it is not only about the number of cameras. Anchoring the V17 Pro's four rear cameras is a 48-megapixel (MP) main camera for high- resolution photos. But I recommend using the default Photo mode, which produces better-looking 8MP photos using the pixel-binning technique, rather than taking 48MP photos.

While the 8MP photos show some noise when zoomed in, I am impressed by their colour reproduction, dynamic range and details. The ultra-wide rear camera produces noisier images, but are still decent for social media and Web usage.

For low-light shots, the V17 Pro has a long exposure Night mode that takes very decent photos. While these photos look smeary when zoomed in, colours appear natural and highlights are not overblown.

The phone does reasonably well in extremely low-light conditions. It captures details that are not discernible to my eye, though the photos themselves are not too usable. 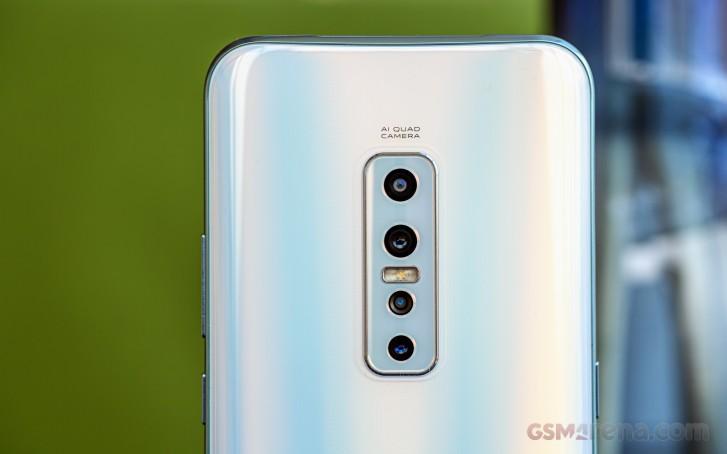 The camera app, though, takes some getting used to. For instance, the bokeh (background blur), ultra-wide and macro options are hidden behind a circular icon. The Portrait mode also does not enable bokeh by default, unlike other camera apps - I have to manually select bokeh by tapping on the circular icon.

The V17 Pro has two front cameras (a 32MP main camera and an 8MP ultra-wide camera) in a pop-up module that springs smoothly from inside the phone.

While I appreciate the wider reach of the ultra-wide front camera, especially for group shots, I am not a big fan of the primary selfie camera. Despite turning off all the beauty and facial-enhancing effects, the photos taken by the front camera still look artificially smooth and overly processed. There is also a fair amount of noise.

However, the pop-up camera module enables the V17 Pro to present an all-screen facade with slim black borders around the display. Completing this modern look is an in-display fingerprint sensor that is as quick and accurate as the technology currently allows.

I like that the display is flat and not curved at the sides, which should reduce accidental screen touches. But its glass back is predictably curved and is quickly covered by fingerprint smudges.

To be fair, these fingerprints are apparent on my review set's white glass back only when viewed at an angle. More importantly, the V17 Pro is not as slippery as some other glass-backed models.

Another plus point for the display is that it uses Oled technology instead of LCD. This means it can support an always-on display mode that shows the time, date and the battery indicator. This screen looks vibrant and immersive. And while it is far from the brightest I have tested, it is bright enough to be used outdoors under the sun.

Despite its pop-up camera module taking up a sizeable chunk of space at the top of the phone, the V17 Pro manages to accommodate a 3.5mm audio jack. But it does not have a microSD card slot, though its 128GB internal storage may suffice for some users.

Prev: Why no-fly zone required for Ukrainian people and all Europe

Next: Vivo V17 Pro: Things you should know!