The war Putin's Russia is waging against the Ukrainian people and Ukraine as an independent state isn't some local postcolonial conflict for resources and influence. It's a real national liberation struggle of all citizens of Ukraine for their democratic development as part of the family of European nations, the struggle for human rights, freedoms, and the future of their children. The main stake in this struggle is the very existence of the Ukrainian nation and its state.

The Ukrainian society and the Armed Forces of Ukraine keep repelling the outnumbering Kremlin forces – their elite combat divisions, detachments of renegade Chechen troops, SpecOps groups, and the Rosgvardia.

Putin's 'Blitzkrieg' plans were hindered as Russian invaders were confronted by Ukraine’s heroic defense efforts by the Army, Territorial Defense Forces, and civilian guerillas, resisting with dignity even in besieged cities, towns, and villages.

Since the onset of the so-called 'special military operation', Russian aggressors have been suffering huge losses, already amounting to over 12,000, along with hundreds of destroyed armed combat vehicles and main battle tanks, mobile air defense systems, military trucks, and other hardware.

The enemy, however, still enjoys substantial superiority. It's air force superiority that’s a very important factor of modern warfare. The Russian invasion initially started with air raids in the early hours of Thursday, February 24, as their cruise missiles and warplanes attacked the Ukrainian cities. The main initial targets on Ukraine’s sovereign territory were air defense (AD) facilities and hardware: combat aircraft, airfields and airports, AD systems, as well as AD Control Centers. Ukraine’s air defense units have been fighting heroically and professionally. To date, almost 50 enemy warplanes, over 60 combat helicopters, a significant part of the 600 cruise missiles and Iskander-type ballistic missiles were downed in Ukraine.

Twelve days into the start of war, as the occupiers keep suffering major losses and fail to advance significantly, Russian generals seem to have finally realized it’s Ukraine’s great combat spirit that is holding them back. The Ukrainian Armed Forces are effectively defending Kyiv, Kharkiv, Chernihiv, Mykolaiv, as well as going for counterattacks, having successfully liberated Chuhuiv and a number of other areas.

Having made these displeasing conclusions, Russia’s dictator Vladimir Putin and his generals decided to shift their main focus toward airstrikes to fully destroy peaceful Ukrainian cities – the same they once did in their dirty military campaigns in Chechnia and Syria. Russia has resorted to outright terrorism and mass killings of civilians, including women, children, and the elderly, in massive air raids. These attacks involve Kalibr cruise missiles, launched from aerial and sea mobile platforms (the latter being located in the Caspian and Black seas. Also, the Iskander ballistic missiles are being launched from the territory of Russia and Belarus. Moreover, the enemy started to relocate its tactic ground-based Tochka-U missiles to a number of firing positions nearby the main Ukrainian cities of Kyiv and Kharkiv. There are also reports of the use of X-101 long-range cruise missiles, launched by Tu-160 and Tu-95MC strategic bombers.

These attacks have been taking many innocent lives. Whole families are being killed in the airstrikes. Meanwhile, the Russian invasion has led to a massive outflow of IDPs to the western regions of Ukraine and refugees – to the EU. More than 2 million Ukrainians have been forced to flee their homes in the hot war zones and are now facing unclear prospects for their future The civilian infrastructure and logistical chains of many Ukrainian cities and villages have been totally destroyed – mainly in airstrikes. Especially heavy losses were inflicted on cities of Kharkiv, Irpin, Mariupol, and Volnovakha. In these localities, normal life is mostly impossible at the moment.

But even more dangerous developments are being observed now. Russian dictator Putin has announced further airstrikes on Ukrainian cities, their industrial facilities as his next aggressive step. 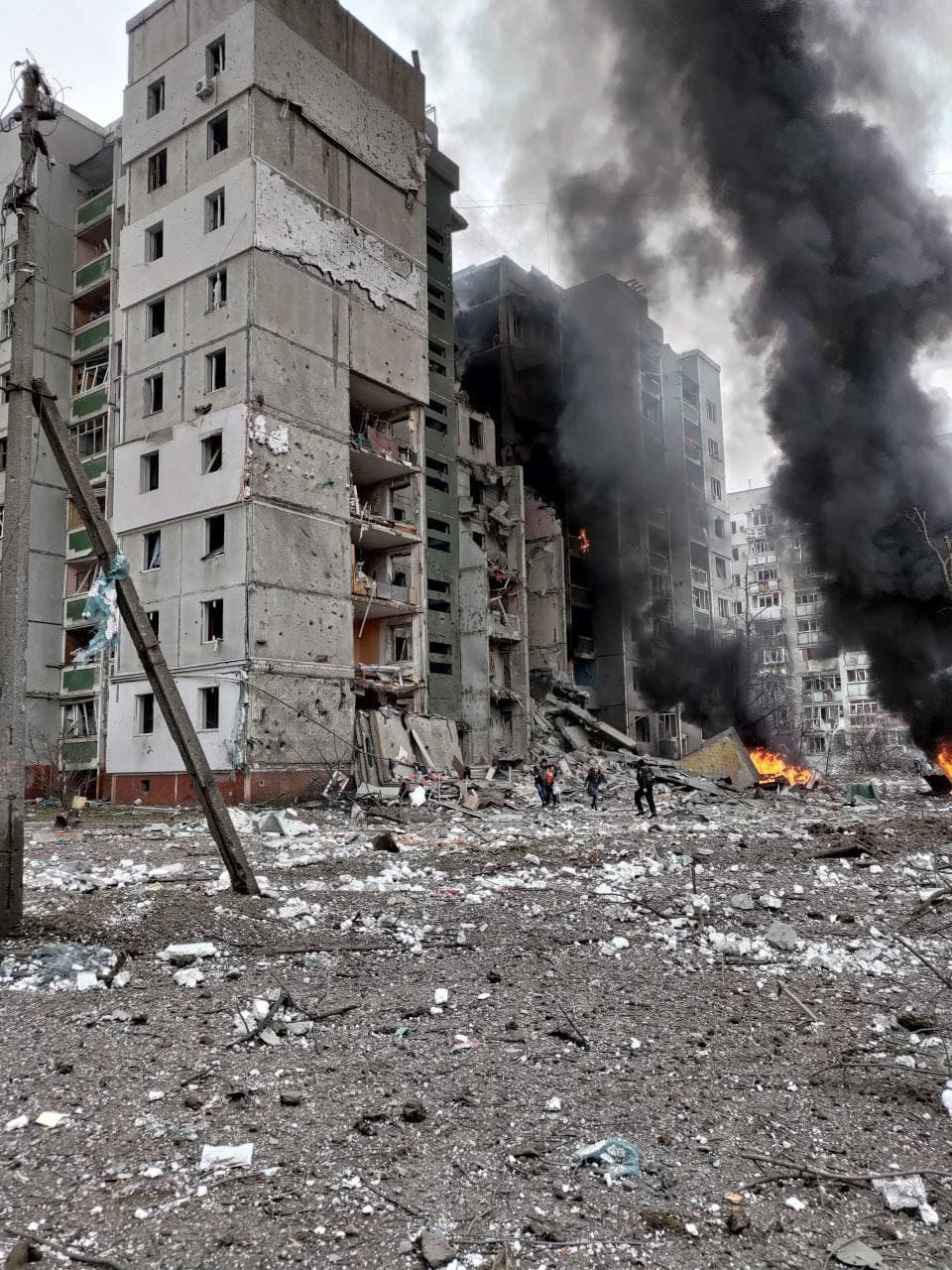 It should be noted that the international community is trying to deliver an adequate response to these atrocities and air terrorism, committed by the Kremlin madman and his horde. Massive packages of economic sanctions have been introduced, targeting Russia, and multiple appeals have been made by various actors for Russia to stop the war in Ukraine. During the meeting of the UN General Assembly, a resolution calling on Russia to immediately cease agression against Ukraine was passed. Also, the UN’s humanitarian agencies are assisting Ukrainian refugees. Pope Francis also made appeals to the Kremlin to stop killings in Ukraine.

However, frankly speaking, these international efforts toward achieving peace remain and offer little to no optimism. Among the wave of peace appeals voiced by Western officials, mainly focusing on 'helping Ukraine', the main instrument of blocking Russian aggression hasn’t been applied yet. This main instrument is a no-fly zone over Ukraine. Military professionals and experts realize that it’s precisely this no-fly zone over Ukraine that will deprive Russia of critical air superiority and save thousands of lives. The best example of such no-fly zone was during the Bosnia war. In that case, this became an essential factor helping stop the fierce fighting. The NATO forces set up an effective system of complex control, surveillance, patrolling, and countering Serbian air raids.

These days, NATO, US, and UK politicians, officials, and military decision-makers are claiming in 'one voice' that introducing a no-fly zone over Ukraine would provoke an open armed conflict between Russia and NATO. But the latter doesn’t want a direct conflict with a nuclear power. If this argument is accepted, the very foundations of international law principles as we know them will become a matter of the past and both the UN and NATO will prove ineffective. This is due to the fact that, in such a case, the force of civilized law will be replaced with the law of force and crime.

NATO has been hesitant to approve President Volodymyr Zelensky and the Ukrainian parliament’s request for a no-fly zone to defend Ukrainian civilians. But if NATO is so terrified over Putin's blackmail today, are there any guarantees the bloc will act resolutely within its Article 5 obligations to jointly defend Baltic States that could well become Putin’s next targets if he succeeds with subduing Ukraine?

Moreover, NATO’s conventional and nuclear potential is much more powerful than that of Putin's Russia. At the same time, NATO reluctance and irresolute stance could actually provoke Moscow to commit even more war crimes in Ukraine, the country that has already suffered the horrors of the Holodomor and Holocaust, as well as contribute to Kremlin’s readiness to 'test NATO' on their own territory through nuclear blackmail.

Besides, Ukraine’s nuclear power plants already seized and fired on by Russian invaders have their own very dangerous potential that could affect the entire continent and beyond.

It should be noted that western societies are more decisive in their attitude to repelling Russian aggression and stopping the mass killing of civilians by closing the sky over Ukraine. Testifying to this are massive demonstrations organized and public appeals signed in Washington, Warsaw, and other Western capitals. Europeans understand that the annihilation of Ukraine and mass killings of Ukrainian people by Russian missiles and warplanes would eventually lead to huge losses for democratic rule and freedom, as well as to an even more devastating war that will affect the whole of Europe.

Meanwhile, some reasonable reactions are heard in the West. For example, former U.S. special representative for Ukraine Kurt Volker offered to set up a no-fly zone over Kyiv and the western parts of Ukraine – as an initial step. It is believed it is possible to set up the zone by a step-by-step principle, either by means of the entire NATO bloc or by a coalition of willing allies. First of all, the no-fly zone should be introduced over the western regions of Ukraine where millions of relocated Ukrainians are temporarily staying and where many international organizations and embassies have moved their personnel. The no-fly zone should also be introduced over hazardous industrial and power facilities. As another effective step, shipments of modern AD weaponry should be ensured to Ukraine, such as fighter jets, AD missiles and complexes, to stop Russian air raids as soon as possible.

The possibility of NATO’s no-fly zone over Ukraine annoys and frightens the Kremlin. In this regard, the Russians are now threatening possible contributors to the no-fly zone and activating intelligence operations. For example, substantial activity of agents of influence is being observed even on US soil. Retired American Colonel Douglas Macgregor was impudent enough to recommend that the President of Ukraine just 'surrender' to Putin's regime, fulfill Russian demands, which implies “deweaponizing” and recognizing the “independence” of the so-called 'people republics' and the occupied Crimea. Moreover, this retired colonel and vocal Trump and Russia supporter circulates on Fox Business the fake narratives, spread by Russia, tarring the Armed Forces of Ukraine. Macgregor attempted to justify Russian war crimes, committed from the air, by falsely claiming that the Ukrainian forces have been hiding behind civilians as Middle East Islamists'. So, in his vision, Putin should attack the Ukrainian cities from the air. Just to be noted by this retired colonel, Ukrainian soldiers, together with volunteers of the Territorial Defense Forces and civilian guerillas are bravely fighting off the aggressor, shoulder to shoulder, operating in all kinds of terrains, including fields and forests, as well as successfully defending Ukrainian cities, towns, and villages.

America’s true military experts know that Ukrainian soldiers fight with dignity, with a strong spirit, to defend their Motherland. As to Macgregor's shameful claims, they might be explained by his dubious Middle East experience and big ambitions, which are possibly heated up by his Russian 'friends'. During his service in the Middle East and war in Iraq, he had a chance to speak only with Saddam Hussein’s ‘slave soldiers’. It's clear that MacGregor just has no clue about the Ukrainian context at all, especially as to the struggle of the Ukrainian people against Putin’s regime for their freedom and future.

Thus, the introduction and activation of a no-fly zone over Ukraine and providing the country with AD weaponry are both ultimate requirements for effectively preventing Russian missiles and warplanes from further massively killing civilians across Ukraine. Moreover, this no-fly zone over Ukraine is totally in the interest of NATO allies’ security but today’s strange and hesitant NATO inactivity in the center of Europe could definitely lead to chaos and war crimes that would affect the whole of Europe.

And finally, in a similar situation decades ago, Winston Churchill noted that those who choose shame over war will eventually get both.

Prev: Biden won’t commit to no-fly zone over Ukraine for fear of ‘direct war with Russia’