The White House on Thursday again avoided making a commitment to creating a no-fly zone over combat-battered Ukraine, fearing “a potential direct war with Russia.”

“The no-fly zone requires implementation,” press secretary Jen Psaki said when asked if President Biden or his advisers have given such a zone more thought.

“It would require, essentially, the US military shooting down Russian planes and causing or prompting a potential direct war with Russia — the exact step that we want to avoid.”

Thursday marked the eighth day of Russia’s invasion and Ukrainian forces have remained strong – particularly in defending the capital city of Kyiv as a 40-mile-long convoy of Russian troops has been stalled over the last couple of days.

When asked if the US can do anything further to “stop the convoy in its tracks – short of military action,”Psaki pointed to recent US aid to Ukraine.

“One of the reasons the President pushed to expedite the delivery – or the approval and delivery of a security package over the weekend was to give them, the Ukrainians, more support, more equipment, more defensive weapons to utilize in this moment,” she said.

“But we are not reconsidering or taking steps that would prompt a war between the United States and Russia.”

“I said: If you cannot shut the sky now, then give us a timeline. When will you do it?” Zelensky said in a televised address.

Get the latestupdatesin the Russia-Ukraine conflict with The Post’s live coverage.

“If you can’t provide a timeline now, tell us how many people have to die. How many limbs have to fly off of people’s bodies, so you hear us? How many people will count, and we’ll wait until that moment when you feel comfortable.” 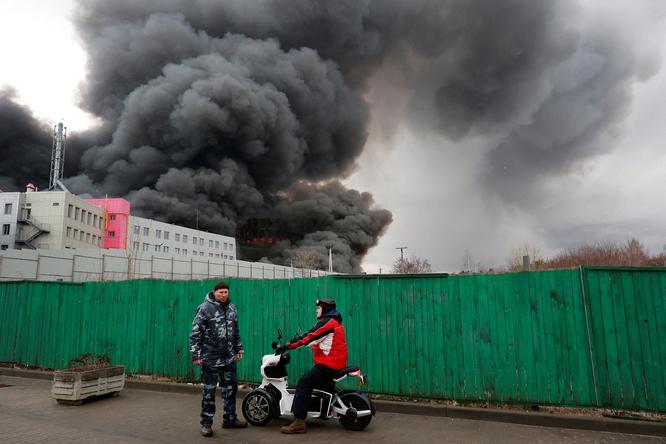 While Zelensky thanked the Western nations for their support and aid, he blasted them for sending it too late.

“The whole world started making decisions too late,” he said. “I want to thank the countries that are helping with weapons. We are thankful, but it’s too late.”

“Strong sanctions right now, I think that was a good start,” Zelensky continued. “Thank God, now we have those sanctions.”

“This is not just Russia’s invasion of Ukraine. This is the beginning of a war against Europe, against European structures, against democracy, against basic human rights, against a global order of law, rules and peaceful coexistence,” Zelensky said in a Sunday statement.

“Anyone who wants to join the defense of Ukraine, Europe and the world can come and fight side by side with the Ukrainians against the Russian war criminals,” he added.

During the briefing, Psaki was also pressed on whether the US would be open to sending air support to Ukraine, if imposing a no-fly zone is off the table.

“Again, I’m not going to get into more details of what the Department of Defense may or may not consider,” she said.

“But what I will tell you is that we have continued to provide a range of defensive assistance, something we have increased only — only increased over the last several days. But we are not considering taking steps that would put us in direct conflict with Russia.”

The Biden administration has repeatedly vowed not to send any American troops into Ukraine and on Wednesday, urged Americans not to travel to the country — despite Zelensky’s call for help.

“However, our travel advisory remains [that] US citizens should not travel to Ukraine,” she added.

When asked if the advice was specifically for Americans “to not go and fight in another nation,” Jean-Piere directed reporters to the State Department.

“That State Department has issued travel advisories and warnings to help Americans make the most informed decisions about their safety,” she said. “So that’s what I would refer you to.”

“If they ask for help, why can’t we fly airplanes in there? Say, oh, it’s because of the Russians, they might come up and contest it. That’s the Russians’ problem. They’re going to get shot down. OK, then what? Putin says he’s going to use a nuclear weapon. If we back away from that challenge, if we don’t confront it, this is like a two-pair poker bluff, for incredibly high stakes.”

When pressed on whether NATO allies should be willing to “risk a certain amount of escalation” with Russia, Clark said “we have to.”

“We have to think about our situation and measure what actions we can take against what risks they incur both immediate and long-term,” he added.

Next: Why no-fly zone required for Ukrainian people and all Europe