Apple's decision to move away from Intel has been in its favor with enhanced performance and battery churned out of the new MacBook Pro models. We have seen several tests where the new M1 Max chip inside the MacBook Pro showed its colors. The new machines shine when it comes to editing or rendering large videos but it does not stop there, A photographer shared his experience of a photoshoot with the Phase One XFIQ4 medium-format camera and Apple's new M1 Max MacBook Pro. Scroll down to read more details on the subject.

We have previously reported how the new MacBook Pro performed like a champ in a Lightroom test. Now, the M1 Max MacBook Pro with 64GB unified memory was used in a real-world photoshoot using ‘the world’s best commercial camera.’ CNET's lead photographer Andrew Hoyle shared his experience of working with a camera that costs more than $60,000 along with the M1 Max MacBook Pro.

The finished image was made of 28 full-resolution images, loaded into a single document in Photoshop, each one with its own masking, adjustments, and other effects. In short, it’s a behemoth of a Photoshop document, clocking in at almost 11GB in size …

The Phase One XFIQ4 medium-format camera was tethered to an M1 Max MacBook Pro. Hoyle shares how the commercial shoots are very demanding. 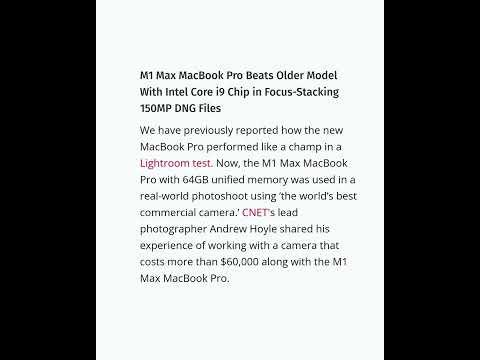 I put together an ambitious product photoshoot of a "technology stir fry" showing a variety of tech products being tossed in oil in a wok above roaring flames. It involved shooting all the different elements individually, then piecing together numerous images from the camera into the single, finished shot seen above. This kind of compositing work can be demanding on a system, especially when working with multiple high-resolution layers.

Hoyle initially exported 45 images with full resolution and it only took 2 minutes in the M1 Max MacBook Pro. He did the same on his older 13-inch MacBook Pro and the results were demotivating.

I initially exported 45 full-resolution images (in Phase One's .IIQ format), which I loaded into an image stack in Photoshop. On the M1 Max MacBook it took 2 minutes, 44 seconds to load the images into the document. I did the same thing using the older 13-inch M1 MacBook Pro (a 2020 model with 16GB of RAM) and it struggled, crashing multiple times before eventually taking almost exactly 5 minutes to load the stack.

Hoyle presented with the timing for each of the machines which he used, You can check out the timing for focus-stacking twelve 150MP DNG files below.

This is all there is to it, folks. Share your views with us in the comments section below.

The links above are affiliate links. As an Amazon Associate, Wccftech.com may earn from qualifying purchases.

Stay in the loop

GET A DAILY DIGEST OF LATEST TECHNOLOGY NEWS

Straight to your inbox

Prev: ColorOS 12 Beta, official version to be available on these Oppo phones from March 15: Check list