Home > Samsung > Vivo launches its most powerful camera phone, the X70 Pro+ in India; specs, price and everything to know

Vivo launched its most powerful camera phone, aka the X70 Pro+ in India on Thursday. The phone is designed from ground up to take on the likes of the OnePlus 9 Pro, Xiaomi Mi 11 Ultra and the Samsung Galaxy S21 Ultra, both from a hardware perspective as well as in pricing. The latter bit is particularly interesting. Not only is the X70 Pro+ its most expensive phone in India to date, Vivo has also priced it higher relative to the China market.

As powerful and impressive as the X70 Pro+ appears on paper, one can’t help but point out, Vivo could have priced it slightly better. Expectedly, there is also a standard pro version of the phone—the X70 Pro—that tries to bring a lot of its features and styling to a relatively more affordable price point. The X70 Pro starts at Rs 46,990 for a version with 8GB RAM and 128GB storage. The X70 series also has a vanilla X70 model, that Vivo isn’t launching in India at this point in time.

The X70 Pro+ brings some welcome upgrades to an all-round familiar camera package—though that’s not to say there are no upgrades there. It packs the latest and greatest chip from Qualcomm, the Snapdragon 888+, an official IP rating, and wireless charging. The X70 Pro+ also comes with a bigger, more advanced LTPO display. The battery has been bumped up too, ever so slightly, in this generation. Rounding off the package are dual speakers. Clearly, this is Vivo’s most complete premium flagship to date.

Let’s start with the cameras. The X70 Pro+ has a 50MP main camera with a Samsung GN1 sensor sitting behind an f/1.57 aperture lens which is optically stabilised—this is same as the X60 Pro+. This is paired with three other cameras, a 48MP ultra-wide-angle camera with gimbal stabilisation, 12MP depth camera with OIS (this was 32MP in the X60 Pro+ without OIS) and another 8MP periscope-style camera, again with OIS, for 5x optical zoom. The X70 Pro+ is possibly the first and only smartphone in the market today to bring stabilisation across all lenses. On the front, it has a 32MP camera.

The Vivo-ZEISS partnership is being carried forward in this generation as well, which is to say, the X70 Pro+ will be able to benefit from all the photography advancements we saw in the X60 Pro+ including ZEISS Biotar Portrait filters and ZEISS T Coating for avoiding stray light, ghosting and other irrelevant image artifacts while shooting. New in this generation is ZEISS natural colour that works a lot like HDR, only to give you more life-like images. 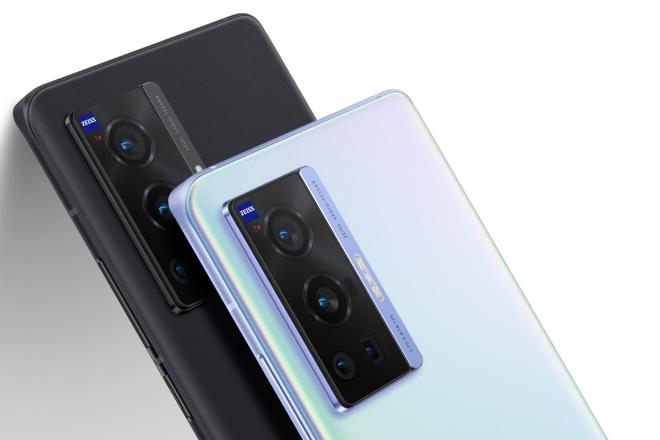 But perhaps the biggest upgrade is Vivo’s proprietary imaging chip—the V1. The company says the new chip “employs an AI system to apply NR (noise reduction) and MEMC (Motion Estimation, Motion Compensation) effects across the board that allows consumers to manifest creativity in high-definition without compromising quality.”

Moving on to the screen, the X70 Pro+ has a 6.78-inch AMOLED display with a 1440p resolution and fast 120Hz Samsung-made E5 LTPO panel. It can peak 1,500nits and play HDR10+ content—though Dolby Vision isn’t supported for some reason. It has a hole-punch cut-out and in-screen fingerprint reader for biometrics.

Under the hood, the X70 Pro+ has a Snapdragon 888+ chip paired with 12GB RAM and 256GB storage. This is non-expandable. Software is Android 11-based ColourOS 12. The phone is eligible to get three years of major Android OS updates and four years of security updates.

Elsewhere, the X70 Pro+ has a 4,500mAh battery with 55W fast wired and 50W wireless charging—Vivo is also launching a compatible wireless charger with the phone that will be sold separately for Rs 4,499.

Vivo has also updated the design bit with a new square-shaped camera island it is calling ‘ceramic cloud window.’ The phone will be available in a single Enigma Black colourway.

The X70 Pro also has four cameras on the back, which is a combination of 50MP main with gimbal stabilisation+ 12MP ultra-wide-angle+ 12MP portrait+ 8MP periscope-style telephoto with OIS for 5x optical zoom. On the front, it has a 32MP camera.

The X70 Pro will be available in two colourways—Cosmic Black and Aurora Dawn.

Both phones will be sold across Vivo India e-store, Flipkart, and offline partner retail stores.