The Redmi 8 has the Aura design. The Ruby Red version we got for review might seem too flashy for some, but it does look stylish for a phone that costs just Rs 8,000. The plastic body though is easily prone to smudges and scratches, so I would suggest using a cover. The scratches really do look terrible on the red colour version.

Redmi 8 has the Aura design as well and this variant is the Ruby Red. (Image source: Shruti Dhapola/Indian Express)

Redmi 8 also comes P2i splash-resistant coating for some water resistance, which is an excellent addition to a budget phone. The phone has Corning Gorilla Glass 5 for protection on the front. The 5000 mAh battery means this is a bulky phone, compared to previous versions in the Redmi series, which had a 4000 mAh battery. 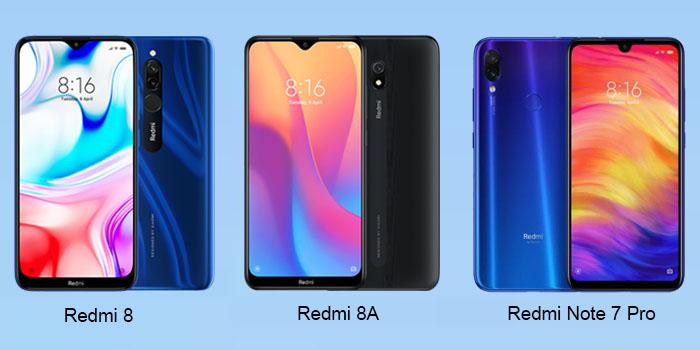 Redmi 8 also comes with a dedicated microSD card slot and separate dual-SIM slots. The expandable storage support is 512GB. The device now has a Type-C USB port at the bottom for the charging which we also saw on the Redmi 8A phone. Overall, these are good upgrades to see on a budget phone.

Redmi 8 comes with a dot notch on top for the display. The phone runs Android Pie with MIUI 10 out of the box. (Image source: Shruti Dhapola/Indian Express)

Redmi 8 has a 6.21-inches display with HD+ or 720p resolution. The display is acceptable for watching videos, gaming, though it is of course not as sharp as full HD displays. This difference is most noticeable when you are gaming on this phone as games like Asphalt 9 look noticeably pixelated at times. But for regular usage, I found the display to be adequate.

The phone runs the Qualcomm Snapdragon 439 processor octa-core processor, which is the same as the Redmi 8A. Performance-wise this is certainly at par with what you expect on budget phones, though there is a noticeable lag at times, especially when you are trying to run heavy-duty games like Asphalt 9.

For users, who just want a phone to browse social media, take photos, the Redmi 8 does the job, though don’t expect it to be blazing fast. The fingerprint sensor is accurate and quick to unlock the device.

The phone gets dual cameras at the back. There’s the 12MP camera with 2MP depth camera for Portrait shots. The camera’s focus is sluggish at times, and it can’t quite handle the exposure levels very well. Some of the shots are overexposed around the edges.

While the colours are okay and the shots have enough details, the camera doesn’t show much difference if I were to compare with the Redmi 8A, which is more affordable.

The Redmi 8 sports a big 5000 mAh battery with 18W fast charging. This is the best part about the device because you are assured the battery will easily last two days with heavy duty usage. The in-box charger has 10W charging, which is standard and it will take more than two hours to get this to 100 per cent with the charger. Still, the battery remains the strong suite of the phone.

The Redmi 8 is a good offering for its price of Rs 7,999 considering the big battery, and decent performance coupled with a stylish design. The weak point is the camera, which remains an issue on budget phones. The only problem is that given similar specifications, many users might prefer the Redmi 8A which is cheaper, runs the same processor and offers something very similar.

Next: Is Realme A Chinese Company? Realme India CEO Calls The Company An Indian Start-up