One such product is the MagSafe charger that Apple introduced with the iPhone 12 series.

Unlike other wireless chargers, which were like plates or pads on which you placed your devices on, the small disc-like MagSafe charger attached magnetically to the back of the new iPhones keeping them in place while charging them. It could work with older iPhones and even other Android phones, but at slower charging speeds and in most cases, without attaching magnetically.

And it worked very well too.

https://images.indianexpress.com/2020/08/1x1.png The Zeb-MagSecure actually performs close to what the MagSafe charger does. (Express image)

But while Apple’s MagSafe charger is innovative, it comes for a very pricey Rs 4,500. And that’s without counting the in-wall charger, which you will have to buy separately. There are alternatives in the market of course, but most of those are not light on the pocket either. A MagSafe-like charger for your iPhone will cost you anywhere about Rs 1,500-2,000 at least (again, without factoring in the cost of the in-wall charger). There are still lower-priced options but those come from very dubious, lesser-known brands.

This is what makes Zebronics’ Zeb-MagSecure a surprisingly good option for anyone wanting MagSafe charging goodness at a relatively low price. The official price of the Zeb-MagSecure is Rs 2,999, but it is available for a surprising Rs 849 on Amazon and on other e-retailers. And it comes from Zebronics, which has been in the market for years now. 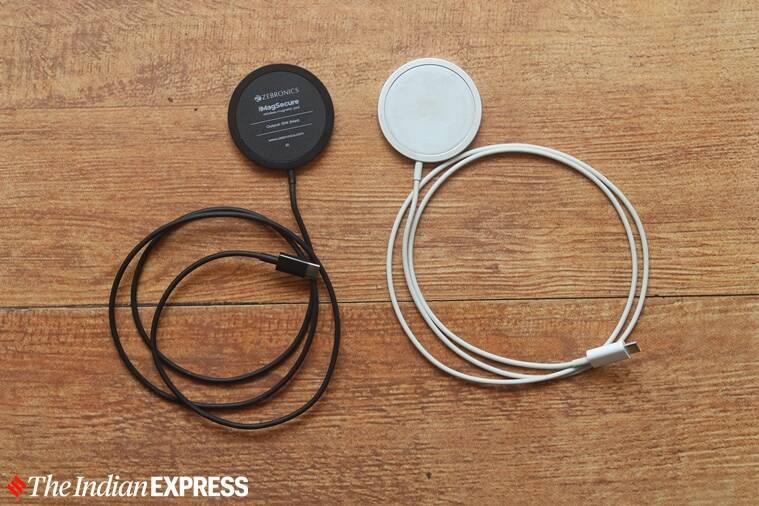 MagSafe, is that you?

And while it might not look as sleekly crafted as the MagSafe charger – the branding and text on the charger does take away from the looks of the Zeb-MagSecure – it seems solidly built and has an aluminium body. It has a charging pad that is almost the same size as the MagSafe charger, and has magnets that attach to the back of phones that support it (the iPhone 12 series and some metal-backed Android phones) and it also has a 1-metre cable with a USB Type C connector at the end (similar to the MagSafe charger) which can be plugged into an in-wall charger. It supports PD chargers so you can get a really fast charger if you wish, or use the one that came with your phone (most mid-segment Android phones now come with 22W and above chargers).

The Zeb-MagSecure can charge both iOS and Android smartphones. (Express Image)

The best part, of course, is that the Zeb-MagSecure actually performs close to what the MagSafe charger does. No, it is not super-fast which means if you are looking for Warp Charge-like speeds, this is not the charger for you. We got about 20-25 per cent charge on the iPhone 12 Pro Max in about half an hour and the OnePlus 9 Pro got about 10-15 per cent in the same time. The charger takes a little more than three hours to charge an iPhone 12 Pro Max. This is not super fast but about the same as a MagSafe charger.

A magnetic hit, with minor misses

There is actually nothing too wrong with the Zeb-MagSecure. The build quality is not as premium but seems sturdy enough. The branding on the charging pad does detract from its appearance and the magnets are not quite as strong as the ones on the MagSafe charger because of which it sometimes might seem like the iPhone is not as securely attached as it does to the MagSafe. Also, charging through cases can sometimes be a bit of a hit and miss – we would recommend taking the phone out of the case and then charging it. Some people will notice a bit of heating but that happens with all wireless chargers, so we see no reason for alarm. We could not spot an MFi certification for the charger from Apple, but that is rare at lower price points. Zebronics says it comes with built-in protection and the brand does have a good track record.

It works almost as well as a premium device which is priced at Rs 4,500, and itself comes for Rs 849. If you have an iPhone and want to experience the magnetic wireless charging experience without breaking the bank, the Zeb-MagSecure is a superb option. In fact, it is a good option even for those who want a very basic wireless charger on a budget. And considering that even a 5W wall charger from Apple is priced at Rs 1,900, this is perhaps the gadget you should go for if you are buying an iPhone and do not want to spend too much extra on a charger (remember: there are no chargers inside the iPhone box now!)

You can get the Zeb-Magsecure for Rs 849 from Amazon.

This is the first of a fortnightly column on affordable technology. You can alert us if you find a new gadget under Rs 1,000 that you think we should look at.

Next up: Transparent looks and lossless music for less than Rs 1,000!

Prev: The History of Bitcoin, the First Cryptocurrency

Next: Get the best deals on gadgets during Amazon.in’s ‘Electronics Days’ and ‘Mega Music Fest’ Adblocker detected! Please consider reading this notice.