Home > iPhone > Even if iOS 15 devices are turned off or deleted, Apple’s "Find My" network can locate them

At the same time, the separate alarm lets you know if your AirTag-equipped bag has been forgotten. The new features that have entered its platform have been long enough that many features are still emerging. One area to note in the iOS 15 preview explains the changes made to "Find My". 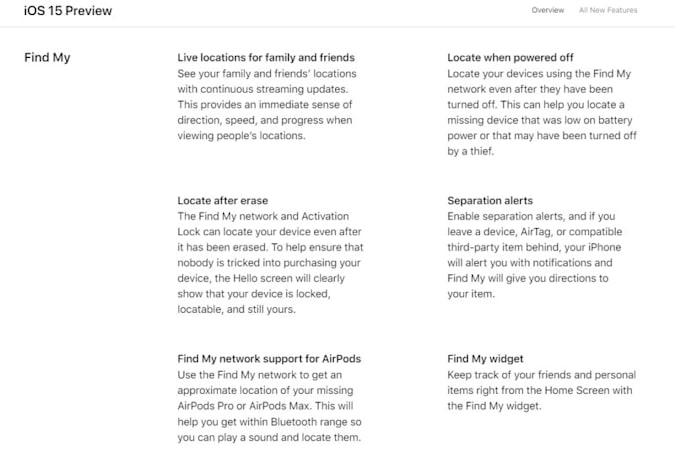 Other than adding live streamed locations of contacts who share their location with you, in iOS 15 your iPhone or iPad is a lot easier to find if it's been lost or stolen. Even if someone erases it, as long as Activation Lock is enabled then the device will still feature your information on the Hello screen and tell people that this device is trackable by its real owner.

According to Apple, the Find My feature will now locate devices even after they're turned off. The press release and preview page didn't explain exactly how this works, so it's unclear whether you can expect one last ping from where the device was when it ran low on battery power / was taken, or if there will be some kind of low-power Bluetooth tracking that stays on even when your phone is off. 9to5Mac has a picture of the popup that appears if an iOS 15 device is running low on power to let owners know about the new tracking features.

Other additions will help you find the lost AirPods Pro or AirPods Max, and if you leave, the separation alert will notify you "back device, AirTag or compatible third-party item."

Prev: Apple will not release a VPN-like "private relay" function in China

Next: Apple’s Testflight beta testing service is about to land on macOS