It’s not a Leica, but if you’re a film photographer, you’re probably going to Like-uh-it a lot. If you like LEGO, you’ll likely be quite partial to it, too. Yes, it’s the (limited edition?) LEGO VIP Rewards Vintage Camera. This article reviews the camera in full with a start-to-finish video of the build (condensed to about 4 minutes) and compares it to several film camera alternatives you may want to consider instead.

IMPORTANT:There are a few things you need to know before diving in and purchasing this camera as part of your photographic kit. Buyer beware, let’s dive in.

Here’s what I cover:

What you need to know

First and foremost,this is a DIY kit. It comes with an extensive, illustrated manual that provides step-by-step instructions on putting together the camera. Be warned: there is no aftermarket service provided by LEGO to help you with construction. This is a bit of a disappointment, considering the options many other current “kit camera” manufacturers — Dora Goodman, Panomicron, etc. — currently offer.

There is good news, however. I contacted my local LEGO store and was assured that almost anyone over the age of 10 would be able to build the camera to spec using the provided instructions. They went on to state that at 179 pieces, I could expect a moderately-paced build to take about 45 minutes, including 1-2 instances of back-tracking and time spent RTFM.

45 minutes is time that could be spent letting film slow me down, so I outsourced the build to Mrs EM. You can see a sped-up video of below: 45-ish minutes condensed into 3 minutes and 57 seconds.

Not bad at all! As a nice bonus, I discovered that LEGO was kind enough to include half a dozen spare parts, including an extra self-timer lever and “leatherette” dots. 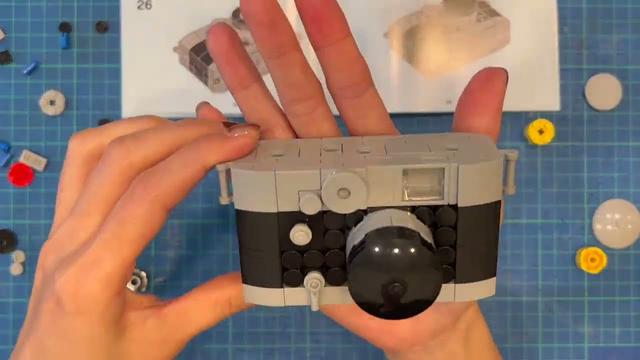 With the camera built, it was time to load it with the included miniature-format film and take it for a spin.

As you’d expect, there’s a lens up front, along with a viewfinder window, self-timer lever, and strap lugs.

As we swing around to the rear, we have the film door, which opens with a pulling motion (from the left). Once open, the film chamber is revealed, which has space for the included roll of film and “transport. The rear also has a viewfinder window, and as we move to the bottom of the camera, we have a non-standard tripod socket, which requires a LEGO Technic Pin (1/2) 4274 connector.

As you can see, the camera fits very nicely into an AVEA 7 end pocket, which leads me to…

I wish I still had my Leica CL to give you a better idea of the size of the camera. It’s diminutive, to say the least, so I sized it up with a few other cameras from my cabinets.

If that doesn’t give you an adequate point of reference, here it is in another format: it’s about as wide as 4x 35mm canisters wide and the height of 1.5:

The lens is interchangeable! Not only that, it’s user-extendible. Don’t like the 35mm (equivalent) focal length included in the kit? Make it longer, make another one, or even mount ANOTHER camera system’s lens to it.

I modified mine to mount a late 1950’s Leica Elmar 50mm f/2.8. While the lens ways a little more than the camera body itself, it’s still a compact combination. That said, it’s not possible to collapse the lens into the body.

On a cosmetic note, I love it when product designers work in little nice flourishes. I especially like the “LEGO” name that’s been embossed into the camera mount here. It reminds me of some replacement monogrammed leatherette I saw some years ago.

I’ve since rearranged the logomark to the correct orientation.

Optical quality and other issues

Is it a real camera? That depends on a few things: your definition of reality, how much previsualisation matters to you vs the final image, and the current price of colour film. In other words, no. I also hope my lame attempts to write a camera review gave you at least a little chuckle.

You can get your own camera for free via a Lego Friends account (spend US$40 or more). Or you can buy one from eBay or a local online marketplace like I did.

The transfer of knowledge across the film photography community is the heart of EMULSIVE. You can add your support by contributing your thoughts, work, experiences and ideas to inspire the hundreds of thousands of people who read these pages each month. Check out the submission guide here.

If you like what you're reading you can also help this passion project by heading over to the EMULSIVE Patreon page and contributing as little as a dollar a month. There's also print and apparel over at Society 6, currently showcasing over two dozen t-shirt designs and over a dozen unique photographs available for purchase.

I'm EM, founder, overlord, and editor-in-chief at EMULSIVE.org. I may be a benevolent gestalt entity but contrary to increasingly popular belief, I am not an AI.Click to see EM's full profile, links and other articles, and please make sure you also check out their website here.

Next: Summit Emphasizes Need for Vision That Improves Health for All Through Governance, Law and Finance