Apple has been “aggressively hunting” for deals to secure live sports rights to help build out its Apple TV+ streaming service, and it’s starting to pay off.

Before any of that is potentially realized, we’re already seeing the company take a major step with another incredibly popular league: Major League Baseball.

The $85 million annual streaming deal will include weekly Friday doubleheaders that will be streamed in the U.S., Canada, Australia, Brazil, Japan, Mexico, Puerto Rico, South Korea, and the United Kingdom.

In May 2021, ESPN announced a new seven-year deal with the league — worth around $4 billion or $550 million annually. The deal opened the door for Apple to fill its first live sports inventory, largely because ESPN walked away from approximately 61% of its broadcast games from last season.

In conjunction with the live games, Apple will air a new live show dubbed “MLB Big Inning,” featuring highlights and live look-ins on a nightly basis during the regular season. Viewers in the U.S. and Canada will also have access to a new 24/7 livestream featuring replays, highlights, classic games, and news and analysis.

According to Forbes, the $85 million annual value of the deal comes out to $55 million per year for the media rights and $30 million allocated to advertising. Apple earned $191.1 billion in revenue from the iPhone in 2021. That $85 million figure represents roughly four hours’ worth of iPhone sales.

But it’s just the early innings for Apple in this space. In fact, this is only the first pitch.

A diverse content base is imperative to compete in streaming, and Apple TV+ has been steadily adding content since its inception in late 2019.

In 2021 alone, the service added 47 TV shows — a 147% increase year-over-year. However, according to Ampere Analytics, the top streamers commissioned far more shows in the same time frame:

While Apple has found success with properties like “Ted Lasso,” it’s debatable whether it’s offering is truly worthy of subscription dollars.

Studies show that the average household subscribes to 3.6 streaming services. If Apple TV+ is going to be one of the premier services, sports will likely play an important role. According to investment bank Needham & Company, 30% of streaming customers require live sports to commit to a subscription.

The tech behemoth has yet to officially publish its Apple TV+ subscriber figures, but according to CNBC, the service had roughly 20 million subscribers as of September 2021. Netflix and Disney+ have 221.8 million and 129.9 million, respectively. 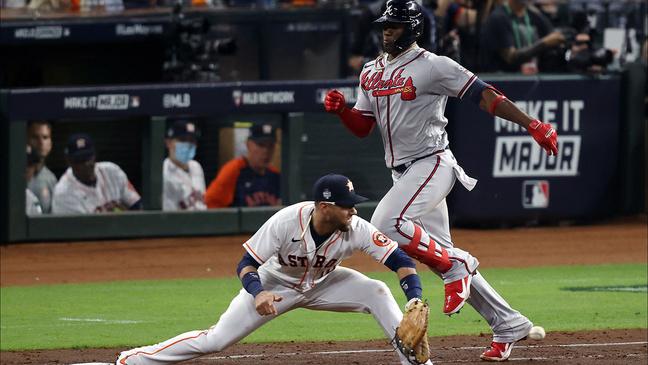 Though Apple hasn’t yet made a huge commitment to live sports, the new MLB deal hasn’t depleted any of its available reserves either, and it could act as a verifying mechanism that live sports rights are worth the investment.

While the deal is a drop in the bucket for Apple, it’s a very big deal for MLB, especially after ESPN trimmed the number of MLB games it broadcasts each season from approximately 90 in 2021 to 30-40 this season — a stark deprioritization for a network that spends $2.6 billion annually on “Monday Night Football” alone.

The new ESPN deal could ultimately be a blessing in disguise for MLB.

Traditional pay TV is on a downward trajectory — with no real signs of a comeback. According to eMarketer data, pay TV (like ESPN) has declined from nearly 100 million households in 2013 to 73 million in 2022. Non-pay TV (streaming services) has more than doubled during the same period, from 20 million households to 56 million.

Prior to Apple, MLB was underexposed to streaming. The league’s new agreement with the tech giant changes that in a big way.

Everyone in the space will benefit from this shift eventually. For national broadcasters like NBC, FOX, and ESPN, streaming is the tide that raises all boats, and we see that as the price of annual media rights follows an up and to the right trend across sports.

The leagues rake in cash, and broadcasters grow their audiences (and ad revenue). Win-win.

All of that said, here’s something to remember: Baseball viewership tends to be strongest in local markets versus national ones, and regional sports networks generate a good chunk of MLB revenues.

According to The Athletic, RSN fees account for approximately $2 billion of the $10 billion of total revenue generated by the league.

On the other hand, national TV deals with ESPN, Fox, and Turner Sports pay MLB a combined $1.74 billion annually that’s shared among the 30 clubs. While those deals generate revenue for the league, they are increasingly expensive for cable providers and drive little return on investment.

According to CNBC, the average monthly cost of an RSN in 2021 was $6.42 per cable subscriber.

Streaming poses a threat to this entire model. If the Apple experiment with MLB goes according to plan, pay TV distributors could potentially cut RSNs from their bundles altogether.

Once the content is no longer exclusive to the individual RSNs, their value diminishes, and streamers will have an even stronger hand.

While the focus has been on Apple TV+ and MLB, there are implications for other parties.

Netflix is now the only major streamer without a clear path forward on streaming live sports. Until now, Netflix has remained steadfast in its position that sports-adjacent content such as “Drive to Survive” is sufficient when it comes to programming.

With Apple now entering the market, however, most streamers have content banks that include live sportsand sports-adjacent programming — whether that’s the “30 for 30” docuseries on ESPN+, or the newly announced Lewis Hamilton documentary for Apple. Despite a couple of massive hits, Netflix is far behind on the live product.

It’ll be interesting to see when and where Netflix (inevitably) enters the sports streaming conversation. If their live content produces anything close to the thrills of “Drive to Survive,” I’m all in.

Prev: Apple: $250 Or $100 Scenarios Are Both Possibilities As Apple Can Manufacture Earnings